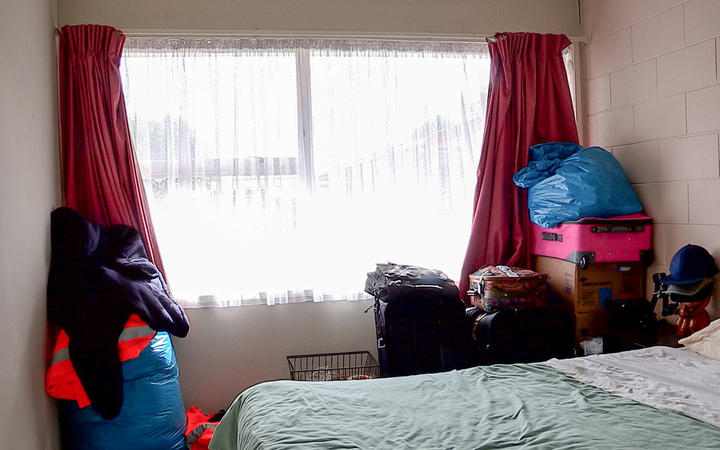 As of 31 April, those nine people had lived at one transitional housing facility for 248 weeks, according to documents provided to RNZ under the Official Information Act.

There are 46 other people living at the same facility, but the government will not say where it is or who runs it.

Transitional housing is meant to be temporary accommodation for people in urgent need of housing. Various housing providers contract to the government, with the idea of offering wrap-around support services to help people "address their needs and move back into long-term accommodation".

Ministry of Housing and Urban Development (HUD) deputy chief executive, housing supply, response and partnerships Anne Shaw said in a statement the facility where the nine people lived provided a service for clients with "high and complex needs including drug and alcohol addiction issues".

"The facility is a safe haven for clients and the length of time taken for them to feel able to take the next step in their journey varies."

Many people stay in transitional housing for months, not weeks

As of 31 May, there were 4271 transitional housing places across New Zealand. People pay 25 percent of their income towards the housing, with the aim they move into permanent homes in about 12 weeks.

But data provided by HUD to RNZ showed many were staying much longer.

For example, between January and June 2020, 635 people left within 12 weeks and a further 679 within 20 weeks, while 522 were still living in transitional housing more than 20 weeks after moving in.

Thousands of people have stayed in transitional housing over the years, but despite the aim being to move them into permanent homes, the government does not have data about where many move to.

Of the 1451 people who exited transitional housing between January and June 2020 (the most recent data HUD has), 239 moved to private rentals, 419 moved into public housing and the government does not know where the remaining 793 moved to.

In some cases, the households may not tell the transitional housing provider where they are going, Shaw said. HUD was working with providers to improve the data they capture and its reporting processes.

The wrap-around support services aim to help people address the "complex and multi-faceted" barriers they are facing in obtaining a long-term housing situation, Shaw said.

"As such, the time taken to achieve a suitable outcome can vary and providers can continue to support households through this journey whilst they remain in transitional housing."

Social worker Kris Teikamata works with people living in transitional housing in Auckland. She assesses their situation, makes housing applications on their behalf and checks in with them regularly, providing support ranging from enrolling families with GP clinics, connecting them with a financial mentor and running nutrition and parenting programmes.

She said the biggest barrier to finding them homes was the lack of affordable housing.

Many had ended up in transitional housing in the first place because they could not afford private market rents and had built up debt because of arrears.

"Ten years ago they had equal chance of finding a private rental or getting into a state house … because the rents were $350, $400, $450, so when I worked with families 10 years ago it was pretty much which came first," she said.

"Now, with the state of their finances, and their income, and even the advice of their budgeter, I'm not even pushing them into private rentals because it's not sustainable and even when they find a private rental it might not be healthy or safe, warm or dry."

The government has pumped millions into transitional housing, increasing the number of places by 2533 since the end of 2017, and is working towards delivering a further 2000 places by mid-2022.

But at the same time Ministry of Social Development's Housing Register for public housing has soared, increasing by 45 percent in one year to more than 23,000 applicants in March this year.