People who might otherwise be left out in the cold now have a warm, safe and dry place to stay with the opening of Wellington's largest transitional housing facility.

The central city building, was developed in a partnership between government, local council and the City Mission and would accommodate up to 100 individuals and whānau.

The government is contributing $15 million over three years to support Te Pā Pori, which would be staffed 24/7 and have wrap around support services.

Easy to see from Tory street, the building covered in Zebra stripes was once a backpackers, it was then going to be a boutique hotel.

It's been reinvented once again and is now 83 self-contained rooms and common areas for those who need a temporary place to live.

The City Missioner Murray Edridge said he was delighted to be able to create this space, which would give people the best they can give.

"We know that people's lives will be changed in this building.

"And I want to acknowledge the staff from the City Mission who are doing the most amazing mahi in this space. We know over the next six years, we're going to fundamentally change lives and what a privilege that is."

"It's not a permanent home, but it's somewhere that's safe and warm, where people could get the help they needed to make the next steps in their lives," he said. 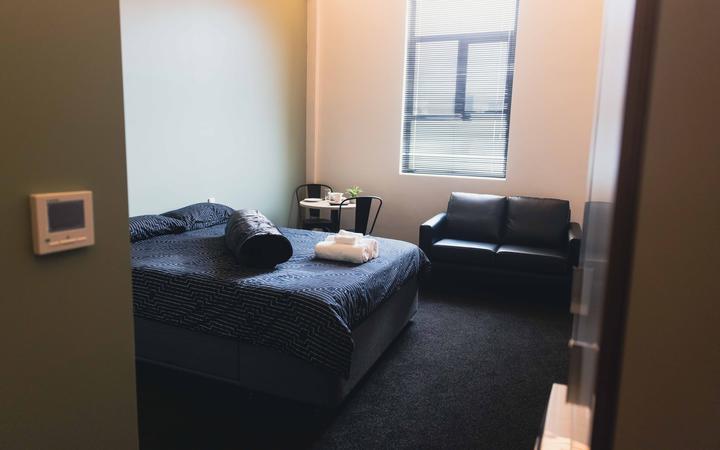 One of the rooms in the Te Pa Pori transitional housing complex Photo: Dom Thomas

Zane Budhabhai is one of those people - he had been staying in his new whare for almost a week.

He said having a place to call home for now meant a great deal to him.

Almost all rooms have a bathroom, a kitchenette, television, wardrobe, table, and couch - Some also have a washing machine.

"I'm just absolutely amazed by what we've been provided here, us and the other people staying here. I'm really grateful for the support here.

"Just even if you need to talk over something you can talk with the staff, if you need help with budgeting or work or any kind of social service, the Wellington City Mission are happy to help.

Zane, with help from the staff, was creating a plan to get a job in something he likes, such as truck driving or administration.

National Party MP Nicola Willis had spoken out about the housing shortage before, and while she supported this type of facility - she said it was not enough.

"I do want to acknowledge that we still have hundreds of Wellingtonians living in temporary emergency accommodation that is often unsupported, unsecured and unstable.

"There are hundreds more living in that situation than there were three or four years ago.

"And across the country, we have more than 4000 children being raised in motel rooms. So, this is a drop in the ocean."

Someone else with concerns started off with the nickname "angry neighbour", but Jaffa Beech changed his tune after understanding exactly how the facility would work.

'My concern was about the outside, what I perceived as outside of their purview.

"They have somebody downstairs, but if your tenants move outside and then they attract thieves and stuff like that, and the drug dealers and there's a lot of them around, what are you going to do and how do they prevent them impacting their clients? How do they help us walking past feeling safe?

"They just responded to everything one after the other and it was really good."

Housing Minister Megan Woods was on the grand tour around the building and said she was impressed by how beautiful the rooms were.

She said this was a place where lives could be changed.

"There are already some people in here that are making their lives here and that is absolutely critical. I'm looking forward to seeing more people in here and us continuing to roll out more spaces."

Woods said unfortunately in Wellington there was more than enough demand to keep it at capacity.

Something Edridge, was prepared for.

"We're actively working to place people into permanent housing from the moment they join us.

"So this isn't the place to come and just stop. This is a place you come and keep moving.

"And in fact, we help you make those most fundamental changes in your life. So that actually you can go on to be successful wherever you go, and whatever you do," Edridge said.

The building is leased from property developer Alex Cassels for the next six years and is being underwritten by the Ministry of Housing and Urban Development.