Nurses have formally declared they will walk off the job again in just over two weeks. 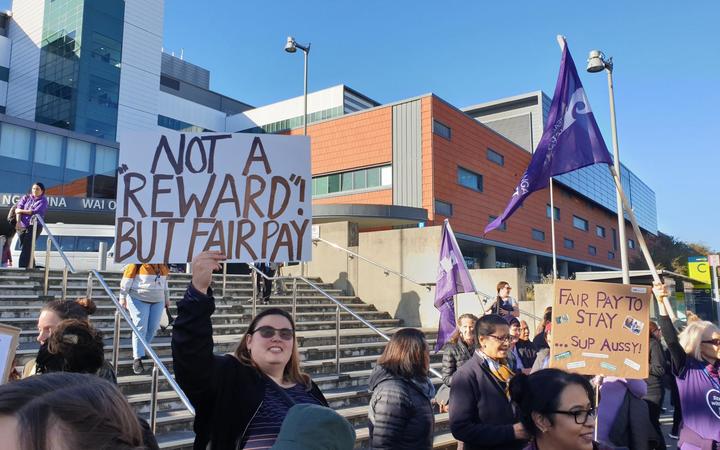 Some nurses on strike in Wellington in June as part of nationwide strike action. Photo: RNZ / Finlay Dunseath

They rejected the latest pay offer by the district health boards last week, and have now issued the DHBs with a notice they intend to strike for eight hours on Thursday 19 August.

Their union, the Nurses Organisation, said managed isolation and quarantine and border workers will not strike, and there would be a life-preserving staff levels in all hospitals.

The action will involve around 30,000 nurses.

The union said nurses were unhappy that the latest contract does not do enough to ensure safe staff levels.

But the DHBs said they were surprised when nurses did not take up the offer.

The DHBs are taking nurses to the Employment Court, accusing them of not doing enough to guarantee safe staffing levels during their strike this month.

The DHBs say they want assurances there will be enough emergency cover during the strike.

They say the nurses are only committing to doing their best rather than guaranteeing safe staffing.

In response the union said they would ensure there were enough nurses to provide live-preserving services.

Nurses Organisation negotiator David Wait said they have been blindsided by the move.

"I think the fact that they've done this in a surprise move is probably an indication that they are not treating the relationship with the respect that it deserves."

On Friday Health Minister Andrew Little made a direct appeal via video for more strike action to be called off.

Little said he wanted to be very clear that the proposal put to the nurses, was one proposed by the unions, so the deal nurses have rejected is one put to them by their own union.

Last month, the Nurses Organisation union agreed to consider the government's pay offer, but it was rejected in a ballot which closed last Thursday.

The NZNO lifted a notice for a 24-hour strike on 29-30 July so members could consider and vote on an amended offer, but strikes planned for 19 August and 9-10 September would still go ahead if no acceptable deal was received.

Wait said that while the DHBs had made promising moves on pay, the offer contained "too many ambiguities".