The deluge just over a week ago has left 100 homes in Westport uninhabitable.

Ardern said it was a useful opportunity to be on the ground in Westport.

"To see what both their recovery needs were but also their longer term needs. What's really clear is the housing issues that are likely to present for not weeks but months." 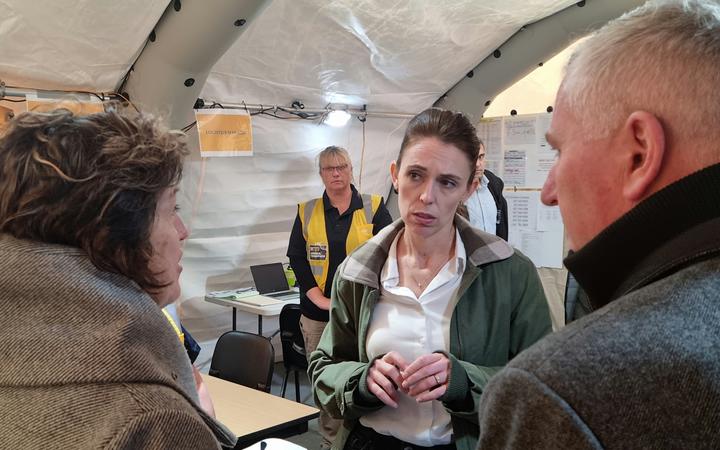 She said there were a number of yellow-stickered homes and authorities would need to work alongside the local community to ensure there were housing options available for the families affected.

Funding would help with things like relocatable houses, some of which were already arriving, she said.

Ardern said more work needed to be done to see just how many houses were uninhabitable in the long term.

She also said with a limited number of tradespeople in the area, the possibility of bringing workers into the area was one of the conversations that needed to take place. "Those tradespeople will be in high demand over a number of months."

The government had not yet talked about the possibility of buying up red-zoned homes, she said.

An enormous amount of work had already been done, but there were still an "enormous" number of houses with red and yellow stickers.

West Coast MP and Agriculture Minister Damien O'Connor said about 30 farms had been affected, three or four were affected badly, one of which was dealing with major stock loss.

Ardern said local jobseekers would be brought in to help with the clean-up and recovery.

O'Connor said they did not have an exact estimate on stock losses or damage for farmers, but the best estimate at this point was 500 stock lost. He said most of the farms dealing with heavy silt may be back in production within six months.

"Farmers, while it's gonna be really tough for the spring, they'll see their way clear," he said.

Ardern said there were still discussions going on across the country about funding flood protections and climate mitigation. She said there was no question the country was seeing some extreme weather events.

About Fiji's Covid-19 situation, Ardern said: "We're continuing to reach out to Fiji ... their ask of us has continually been about vaccine."

She said New Zealand was contuining to offer any support or advice. "But it is still up to those countries to decide how they want to run their response to Covid."

On truancy: The government wanted to do what it could to address attendance and the select committee was investigating. She said this was a chance to see what more could be done.

On child poverty: "You would be hard pressed to find a govt that has done more to focus on child poverty in the last several decades than everything we've been working on." She highlighted the increased benefits and tax credits, and other changes to the welfare system.

She said the government had been aware as soon as Covid hit that vulnerable families would be among the worst hit economically and that's why support had been rolled out in benefit increases.

About Suhayra Aden: "There's certain things I'm required by New Zealand law to say or not say. And so instead all I can give is the assurance that we have done everything that we should be doing in order to protect the New Zealand community as we facilitate the return of a New Zealand citizen."

She said safety had been top of mind throughout the planning for Aden's return.

"Here' that would have left us in the same position as Australia where actually no one was taking responsibility for someone who ultimately does need to have citizenship somewhere ... in our view their closer connection was to their Australian citizenship. Had the roles been reversed then I argue New Zealand would have taken responsibility.

"Two wrongs don't make a right. Automatic cancellations of citizenship can deem people stateless by international law. That would be wrong."

She said it was for other communities to assess whether Australia would be judged by the international community.

Asked about police numbers she said she did not have the numbers and would want to go over them. Her recollection of the usual churn rate was that retention was actually higher than usual, she said, but she would not want to make a statement without checking the numbers.