Wild weather in Auckland halted some ferry services as heavy rain and wind hit the region early on Monday, while drenched South Island areas were due to get more rain. 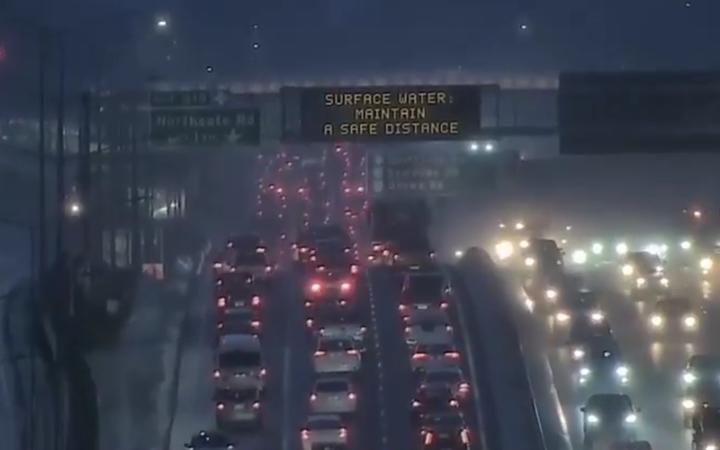 MetService issued heavy rain warnings for Northland and Auckland, the Coromandel Peninsula and Bay of Plenty west of Opotiki in the North Island, and Nelson northwest of Motueka and Westland south of Otira in the south.

Heavy rain moving onto the country

Auckland Emergency Management and NZTA warned motorists to take it easy on the roads and drive to the conditions.

With Met Service predicting heavy rain and strong winds this morning, please take it slow, keep your lights on and increase your following distance on the roads today. Allow extra time for your usual morning commute. #AklTraffic ^TP pic.twitter.com/NrG1StQE8I

SH1 OTAIKA - DELAYS - 7:50AM
Due to poor weather and high demand, traffic delays are occurring northbound between Oakleigh and Otaika, south of Whangarei. Allow extra time for your commute this morning: https://t.co/wYLYkqGkI7 ^TP pic.twitter.com/RLVKwICIRz

Gulf Harbour and Pine Harbour ferry services are being replaced by bus services until further notice.

Hawke's Bay and Gisborne between Wairoa and Muriwai, including Mahia Peninsula, and Banks Peninsula are warned to expect north west gales with gusts reaching 120km/h.

Meteorologist Ashley Parks said the worst of the weather was set to pass by midday.

Buller was also due to get more rain but MetService said it would not be as much as in recent flooding.

The flooding left more than 100 homes in Westport unliveable, with another 400 needing repairs or cleaning before they can be reoccupied.

MetService forecast Westland south of Otira could expect 120mm-150mm of rain to accumulate in the ranges and 70mm- 100mm nearer the coast.

Westport North School, Westport South School and Buller High School - the area's only secondary school - reopen for staff only on Monday and pupils return on Tuesday.

Buller High School principal Andrew Basher said teachers had been affected by the flood themselves, so had been clearing their own properties or supporting other members of the community during the holidays.

A lot of work has gone in to cleaning up and setting up alternative spaces for flooded parts of the school like the art room and gym changing rooms.

He said students would receive ongoing support at school.

"It's really important for our students and their families that we do get our students back in school and try to have some semblance of normality."

Up to 70mm of rain is forecast for Marlborough where roads are still affected by the recent floods.

He said there were slips on roads in the Sounds and the area's infrastructure was still compromised.