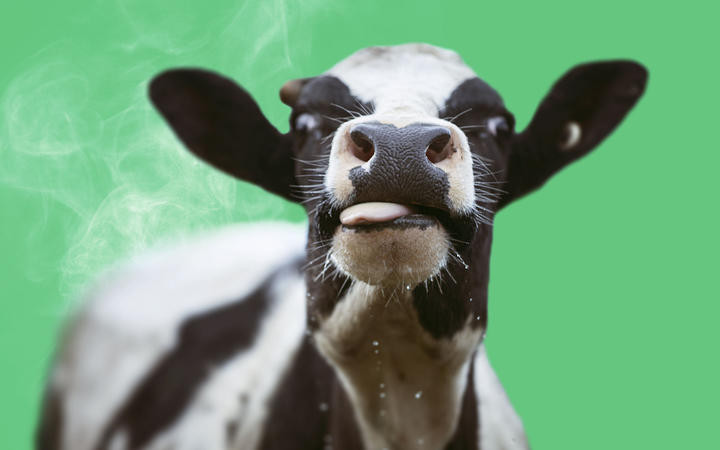 Agriculture made up 48 percent of our greenhouse gas emissions in 2019. The bulk of this comes from methane, a short-lived, but intense atmosphere warmer, which is emitted when livestock burps. It has often taken a backseat in the climate change debate, behind carbon dioxide, which lasts longer, but a United Nation's report released in May put it front and centre, saying methane is the strongest lever in the world's toolbox to slow climate change over the next 25 years.

Dairy cattle were responsible for 22.4 percent of New Zealand's emissions in 2019, made up of 18.7 percent methane and 3.7 percent nitrous oxide.

A 2017 environmental performance review from the OECD describes New Zealand as a country at the last stop on the environmental line: "New Zealand's growth model is approaching its environmental limits. Greenhouse gas emissions are increasing. Pollution of freshwater is spreading over a wider area. And the country's biodiversity is under threat."

The report notes New Zealand had the "second-highest level of emissions per GDP unit in the OECD and the fifth-highest emissions per capita". 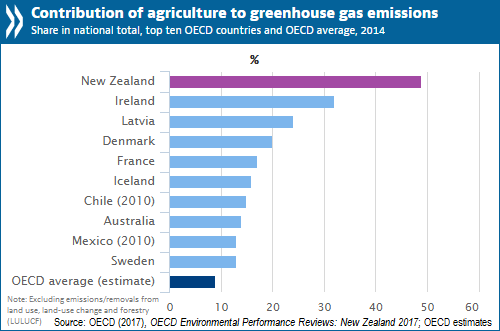 The commission says the cost of transitioning to carbon zero, and a reduction of biogenic methane, is estimated to be a 1.2 percent reduction in GDP by 2050. Doing nothing would cost 2.3 percent of GDP.

How do we compare to other countries?

New Zealand's dairy industry is quick to point out it's cleaner than overseas counterparts.

"The emissions intensity of our co-operative's New Zealand dairy production is approximately one third of the global average," a Fonterra spokesperson said.

New Zealand's meat also has a lower greenhouse gas footprint than other countries.

But business reporter Rod Oram, who has written at length about agriculture and climate change, says being better than other countries doesn't mean we're good.

"I am really very deeply concerned about the complacency here that leads us into this idea that somehow we are less damaging than other farming systems, and therefore, we're all right, we don't have to change very much."

Does the agricultural industry back the targets?

The agricultural industry has had a mixed response to the targets.

Federated Farmers, which represents farmers producing meat and wool as well as dairy, think the 2030 goal should be a 3 percent reduction by 2030, and 10 percent by 2050.

DairyNZ has previously said it will make a "decent crack" at the 2030 methane target, estimating it will cost each farm $13,000 a year, but thinks the 2050 target needs to be changed to "up to 24 percent".

Fonterra's website says its targets for farms is to have no net increase in greenhouse gas emissions from dairy farming between 2015 and 2030.

Oram is bewildered by this. "I find it completely extraordinary that Fonterra and its farmers (just the 10,000 or so farmers in Fonterra are responsible for around about 22 or 23 percent of our total emissions)… has yet to set a target for methane reduction."

Fonterra told RNZ that both government methane targets are "challenging and ambitious" and it supports the 2030 goal even though that's not specified on the company's website.

"Given it's in legislation we're bound by that, so that's our target too".

However, it's position is that the 2050 goal should be provisionally changed to up to 24 percent. The possible financial impact of reducing emissions is "significant yet challenging to quantify" it said.

The Climate Change Commission estimates by 2030 sheep and cattle numbers will fall by around 13.6 percent, while still maintaining the same level of production, through better farming practices.

Is it really possible to hit the targets?

The 2050 target has industry concerned. Without a scientific hail mary, it's not clear how it can be reached without reducing production.

DairyNZ says scientific help is urgently needed in order to meet the 2050 target, and Fonterra says it's needed for both targets.

Fonterra is already investing in research and development. This includes Kowbucha, a probiotic which could reduce methane in cattle, the use of plantain instead of grass, seaweed extract, and a methane inhibiting food inhibitor. It has also set up a programme which will pay farmers a higher milk price for adhering to various sustainability measures.

There are exciting tools in the pipeline, according to the Federated Farmers, but none are commercially available yet.

"We simply do not know if the 2030 and 2050 biogenic methane reduction target can be met without cutting agricultural production. The development of safe biotechnology is simply very unpredictable," says a spokesperson.

"Under the current targets farmers are being asked to do much more than other sections of society, while having fewer mitigation tools available."

Oram suggests government help could come in the form of a prudential fund to help cushion farmers transitioning to lower-intensity farming against any global shock in commodity prices.

Regenerative agriculture is another topic he raised. It's a form of farming where soil health is prioritised.

"Do we know what this RA [regenerative agriculture] thing means? MPI is assembling fine minds to try and unpick what it actually is," says Federated Farmers.

Both Federated Farmers and Fonterra say farmers are already using some regenerative agricultural techniques by having a pasture-based system and mostly farming with seasons.

"Our farmers' pasture-based systems and cropping practises means more organic matter is returning to the soil. New Zealand soil has one of the highest levels of organic matter and carbon globally. This nutrient-dense, carbon-rich soil means we use less fertiliser to grow the same amount of grass compared with other countries."

DairyNZ supports the philosophy of regenerative agriculture, some of the techniques are already used by farmers. More science is needed though to show the benefits. "Right now, we'd like to see some greater clarity around the novel unproven practices, to give farmers and community certainty about the claims."

Farmed right, our land-based systems have a competitive advantage over other types of food production, according to Oram.

"If you look at some of the new technologies that are coming, such as milk brewed in vats or meat grown from stem cells, in very high tech plants, the most that those technologies can do is get pretty close to zero negative impact on the environment.

"They can't do what we can do in our farming, which has to have a positive impact."