This feature is part one of a two-part story. Read part two here.

Down the road from one of the country's largest malls and across the highway from a big shopping complex is the old Centrepoint site, which has become the new home of a colourful and vibrant community. 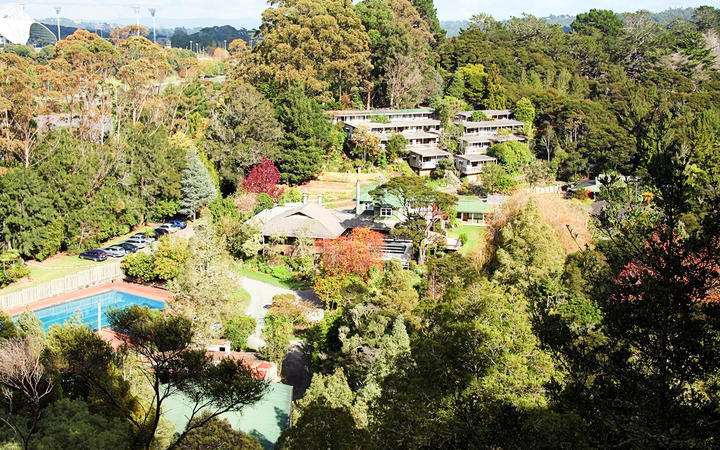 An aerial photo of Kāwai Purapura shows the dozens of buildings built by the Centrepoint community, and North Harbour Stadium in the top left corner. Photo: Supplied / Kāwai Purapura

Thousands of people drive past each day and most have no idea what is hidden behind the bush, or that it was once the site of the Centrepoint commune, thrusted back into the spotlight recently after Heaven and Hell: The Centrepoint Story aired on TV.

There have been numerous stories and documentaries about the controversial commune which came to an end in the early 1990s when police raided the site in Albany, Auckland, and several members were arrested for sexual abuse and drug offences.

But the story about what became of the site after the commune dissolved has never truly been told - until now.

The people who live there now say it is a "place of healing", a "playground for artists" and a community of giving.

The man who runs the place - but doesn't live there - sums it up: "It's very much a community, but it's not just a community for the residents… It's a living entity you come and take part in."

Paul Gregory is the general manager of Kāwai Purapura, a wellness retreat, holistic educational centre and home to roughly 100 people.

Artists moved in after the Centrepoint community left and the Public Trust eventually took over management. Much of the 100 acres were taken over by the council or sold to developers but, in 2009, 19 acres was sold to Prema Trust. 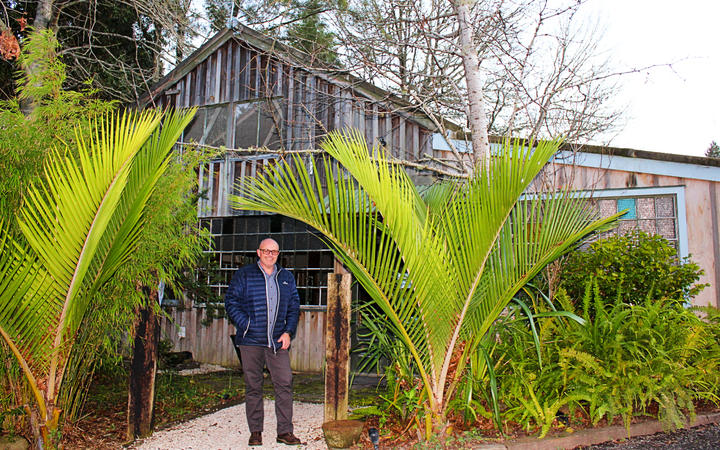 A whakawātea was held shortly after the trust took over, which several former Centrepoint members attended. Some have returned over the years, as part of their own healing journey, and a group of women come back each year to visit The Glade, where placentas and stillborn babies are buried.

One man never left and still lives there, up on the hill. He mostly keeps to himself, Gregory says, but occasionally will mingle with others in the intentional community.

So who are the people who now call this place home?

Many are healers. There are sound, colour and crystal therapists, acupuncturists, yoga, mirimiri and reiki practitioners.

Some work outside the community and return in the evenings to their secret oasis. 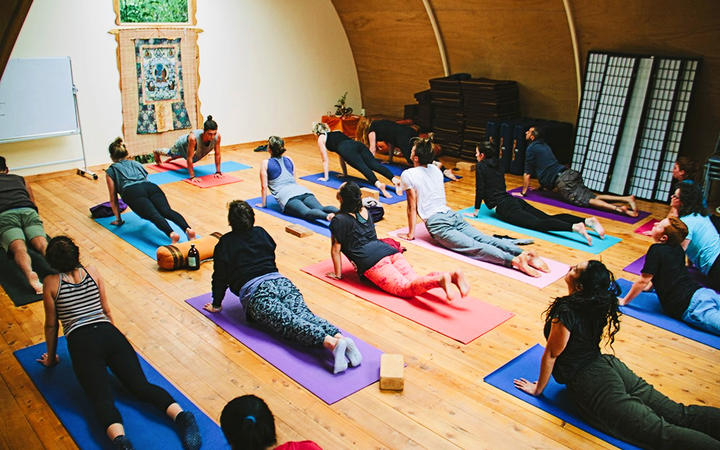 Yoga is a big part of the lifestyle at Kāwai Purapura, where residents teach free classes to the wider Auckland community Photo: RNZ / Michelle Cooke

There's a real estate agent, a movie director and an IT professional.

While most come for peace, some come to escape, but their past lives of violence and drug or alcohol abuse sometimes catches up to them, Gregory says.

Most people live alone, either in a cabin or room, and share bathroom and kitchen facilities.

They live in buildings built by the Centrepoint community which have been given new names, such as Lotus and Shanti. The long rooms have been partitioned and so have the toilets.

They hold residents' dinners, where everyone will chip in money for kai, gather around a bonfire most full moons, and have movie nights together. They even had a residents' screening of the recent Centrepoint documentary.

The interview process usually weeds out those who won't fit in, with the resident manager expected to act on instinct. 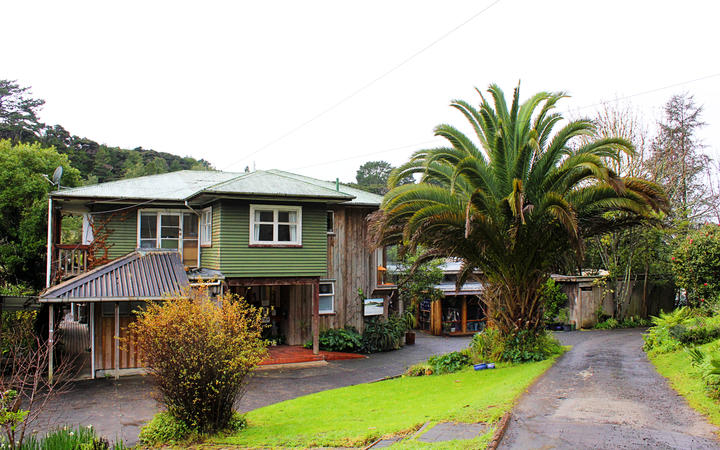 Like any co-living arrangement, there can be tension at times, and bad things happen. People tell stories about conflict between residents and volunteers, people stealing food and unwanted visitors. Sometimes people don't leave when they are told to, and in a worse case scenario, police get involved.

But people are mostly positive about their experiences with KP. Residents say it offers them something they can't get elsewhere.

"I have got all of the nature I could want, but I am still in the heart of Auckland," says Pete Wyatt, a 60-year-old resident who has lived at KP - how residents refer to it - for five years.

The forest is rich and lush, with glow worms, streams and several bush tracks, some which trail off into nowhere. Several large eucalyptus trees planted by the Centrepoint community were recently cut down because they were becoming dangerous, and for the first time the community hidden away up the long narrow driveway was confronted with the outside reality from within the one they choose to escape to. It was if the curtains were ripped open.

The stumps of the trees were left to be used as seats, and more trees will be planted in their place. KP is always turning up surprises that remind Gregory of what it once was and who built it.

An electrician once called out for a job couldn't find the end of some wires after they disappeared into the ground, so they had to ask the old Centrepoint member who still lives there to help.

"He trotted down and came and saw us and we walked off into the bush and on the back of the tree in the middle of nowhere is a fuse board, and we flicked a switch and the power came back on," Gregory says. It's since been removed. 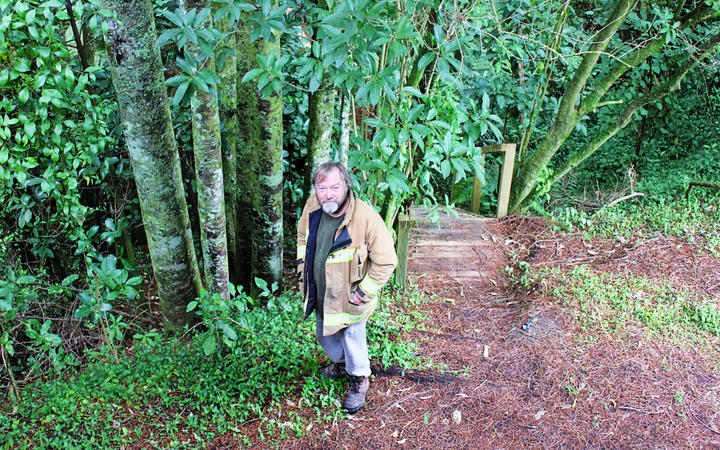 Pete Wyatt says what he loves most about Kāwai Purapura is he can live amongst the birds, streams and bush, but is still in the middle of Auckland. Photo: RNZ / Michelle Cooke

The trust generates income from the residents' rent, casual accommodation, its on-site café and venue hire. Rooms and facilities are booked out for conferences, they hold annual festivals and there is even a school holiday programme. It is open to the general public, but some choose not to come because of its dark past.

Many people from overseas used to visit, particularly to learn yoga, or volunteer in between the fruit picking season. They used to have up to 50 volunteers at a time - more in the lead up to the big festivals held on site - but that number has dwindled to around 15.

Annette is the volunteer manager and arrived after the second level 4 lockdown last year, having hunkered down off-grid in Raglan for the months prior.

The crystal sound therapist with a background in law and business quickly put her skills to use, bringing older and younger volunteers together, giving volunteers their own rooms and bridging the divide between them and residents.

Everyone is always coming to her with problems, usually ones she can handle. It is fine if people have issues they are working through, she says. But while KP might be a lot of things, it is not a mental health or addiction service.

Annette would like to see the place focus more on becoming self-sustainable, a sentiment echoed by many of the residents and returning volunteer, French man Thomas Tournant. 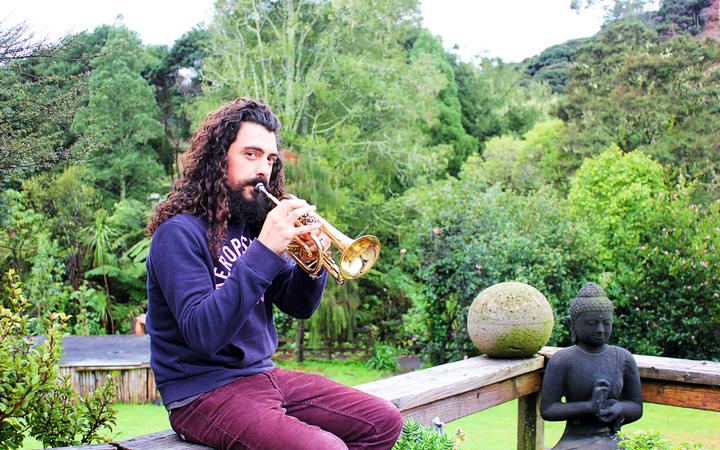 French man and volunteer Thomas Tournant keeps returning to the community. He says the site has a lot of potential and should aim to be self-sustainable. Photo: RNZ / Michelle Cooke

After eight months travelling and working on orchards, Tournant came back a couple months ago after chatting with management about plans for a Heal NZ festival next year. But he is driven to stay by a passion for the land.

"We need people to stay mindful to make this place what it should be because there is so much potential," he says.

When the Prema Trust purchased the site, trustees Phillip and Jennifer Cottingham had a vision to build a place where people can learn about all sorts of different ways of living and environmental and ecological awareness.

"We really see it as an education centre - an example of living in a busy urban environment but still close to nature," Phillip says. 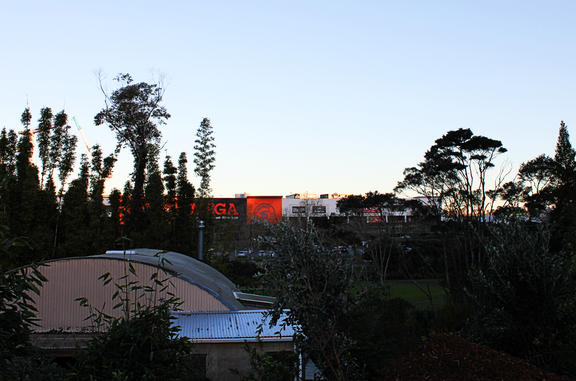 They wish to establish community wellbeing programmes, day seminars and eventually a residential wellbeing facility where people who are discharged from hospital can be cared for as they transition back into their lives.

Phillip says he and Jenny view themselves as kaitiaki, caretakers of the land.

"It's still an unfolding vision, but the vision was to have a campus for our college (Wellpark College of Natural Therapies) and a residential healing facility, and it was clear also that there would be people living here who could align with the land and part of what we wanted to do was to make sure that the existing bush and forest was all preserved."

It appears that as long as the site remains in the hands of the trust, this sliver of oasis in northern Auckland's concrete jungle, will remain. And one day seeds will grow into trees which will once again hide the highway and the big Mitre 10 across the road - the only visible reminders of what's outside.