The stranded baby orca Toa has been taken by iwi to be buried, after his health deteriorated last night and he died.

The Department of Conservation said the orca calf, found stranded on rocks in Porirua on 11 July, died quickly last night at the Plimmerton Boat Club where he was being cared for, surrounded by love.

Volunteers had still hoped to find his pod to reunite him with them this weekend, after a sighting of one off the Kāpiti Coast earlier yesterday. 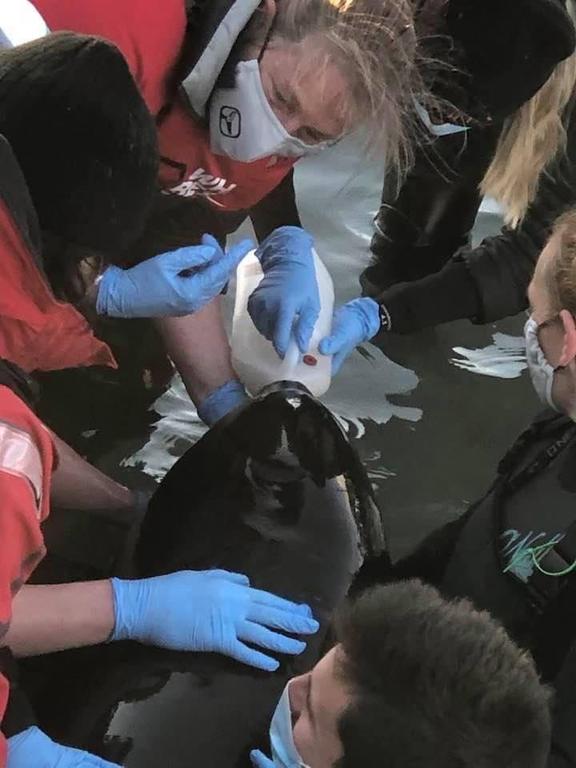 Department of Conservation marine species manager Ian Angus said those involved had worked hard in the tough two weeks they had cared for Toa, and they had tried to make him as comfortable as possible.

"Unfortunately we've had a wild animal that's been through fairly traumatic circumstances now. His behaviours changed, the energy levels dropped, so we became concerned... we had vets on site."

Toa was believed to be between four and six months old, so would still have been reliant on his mother's milk in the wild, and the rescuers had been trying to keep him alive with a formula mixture provided by Wellington Zoo.

He also had injuries from the stranding.

Angus said Toa's body was treated with dignity and respect, and there would not be an autopsy to understand the exact cause of death.

Arrangements were made with Ngāti Toa Rangatira.

The Department of Conservation wanted to thank those involved in the efforts to save Toa, Angus said.

"It's been a long two weeks, sometimes working in cold water, very windy and wet weather. People out here at the site have been fantastic, people supporting the effort to find the pod behind the scenes all round New Zealand have been fantastic.

"The department can do nothing but thank everyone for the support and effort they've made. People here are very saddened, we all wanted a positive outcome."