Toa, the orca calf separated from its pod, has died. He was thought to be between two and six months old. 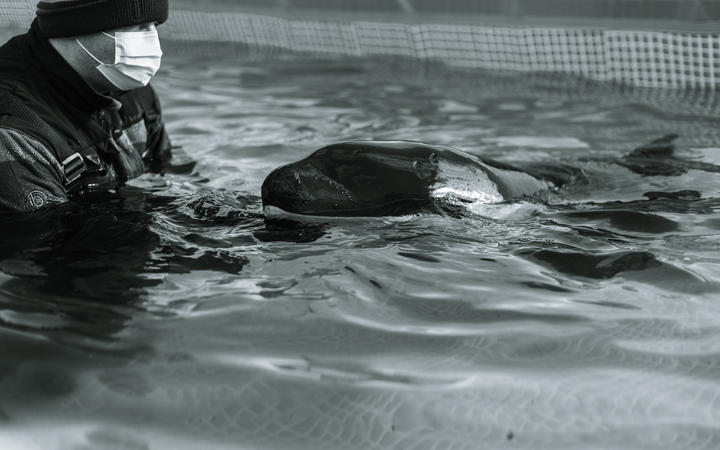 "We have to report that a little time ago Toa passed away, he rapidly deteriorated and vets on site rushed to his aid but were unable to save him," Whale Rescue posted at 9pm.

"We have no further details as to what happened as you can all imagine we are devastated."

"We were always aware that the longer he was in captivity, away from his mother, the more likely it was that his health would deteriorate.

"Toa passed quickly, surrounded by love with his last days made as comfortable as possible."

Teams were united in wanting to do the best for the orca, and reuniting him with his pod was still the goal, Angus said.

"This calf had captured hearts, and no one wanted to believe that he didn't have a fighting chance.

"We will continue to treat Toa with the dignity and respect he deserves. Appropriate arrangements are being made with Ngāti Toa."

A confirmed sighting of a pod off Kāpiti coast earlier today had renewed hopes the orca calf may be reunited with its pod.

Kemper said the teams looking after him were "totally focussed" on reuniting him with his pod, but they were also planning for what might happen if that couldn't happen.

He said there was "a lot of emotion" attached to the reunion and everyone involved in his care "has long-term interests of Toa at heart".

DOC said on Wednesday that the stranded orca calf sustained injuries during the stranding and, while most were healing well, others required ongoing monitoring. However, DOC was conscious of the stress the orca must be under, as it had been a long time away from its pod and mother and to be kept in temporary enclosures.

The baby orca captured the nation's hearts after he stranded from his pod near Plimmerton, north of Wellington on 11 July.

Volunteers took turns around the clock to stay with him, first in a temporary pen using fencing and a boat ramp, then in a pool when the weather worsened. He was moved into a sea pen last night.

Whale Rescue said earlier today he was really enjoying being back in the ocean.

"Toa was moved to the sea pen last night and is really enjoying the freedom of being able to move around on his own.

"It's now basically a hands off environment with volunteers encouraging him to swim and make his own decisions about where he wants to be."