A Royal New Zealand Air Force aircraft has completed a high-risk mission to evacuate an injured person from Antarctica. 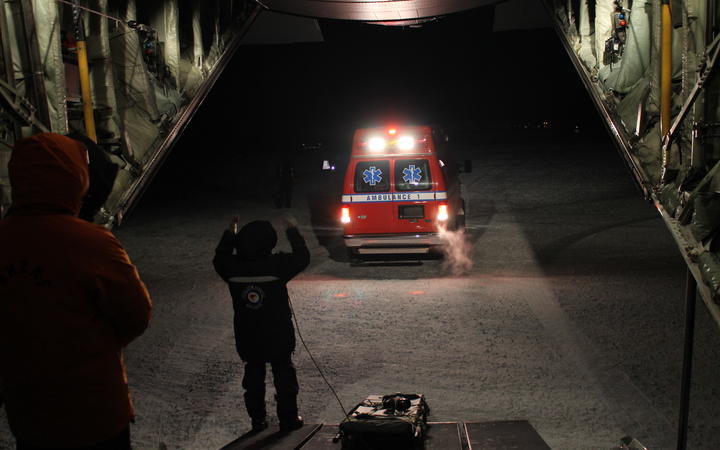 They landed back in Christchurch this afternoon.

In winter, it is dark in Antarctica 24 hours a day, so the crew used night vision goggles to land the aircraft in the dark on the ice runway.

It is the first time the Air Force has flown a medevac mission to Antarctica using this technology.

The patient, who is a member of the United States Antarctic Program, was not suffering from life-threatening injuries and is now receiving further medical treatment.

Air Commodore Shaun Sexton said the Defence Force had been providing support to Antarctica New Zealand and the United States Antarctic Program for many years, but missions like this did not happen often.

RNZAF Base Auckland commander group captain Andy Scott said the team had been trying to get to Antarctica since last Saturday, but poor weather had hampered efforts all week.

"Flying to Antarctica is one of the highest risk missions we fly due to the lack of divert airfields and inability to get down and back without refuelling," he said.

"The crews therefore are highly trained to analyse the situation with regards to the weather and the airfield state before making a decision to proceed.

"Flying in winter presents even more challenges due to the extreme cold, the rapidly changing weather and little to no visual warnings of the changes you would 'see' in summer."

The Phoenix airfield at McMurdo was prepared by ground crew in Antarctica who made sure the runway was lit and that it was safe for the aircraft to land.

The aircraft refuelled at McMurdo while the patient was picked up before getting airborne a short time later.