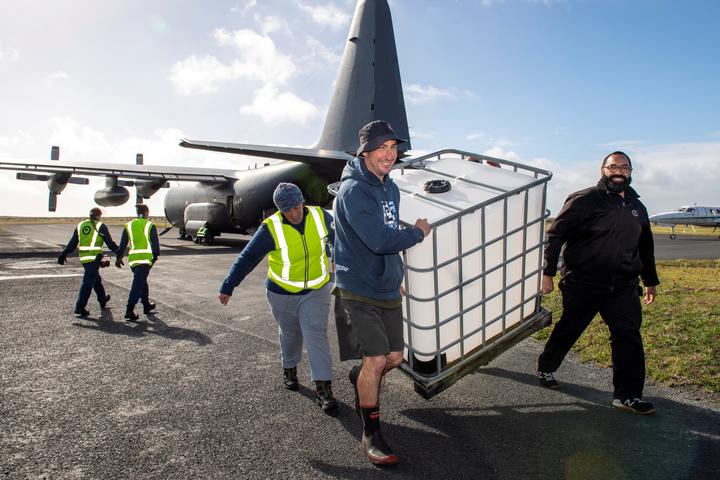 An RNZAF C-130 Hercules crew has delivered water tanks to the Chatham Islands where they will be used to help locals with water security and to water crops Photo: NZDF

The tanks, which have been donated by Paul and Donna Kerridge, are to be used to supplement water supplies at Saint Barnabas Shelter and a community garden.

They will also be used by whanau who do not have sufficient fresh water facilities to enable them to live on their land.

"We have to keep our aircrews current in a range of flying skills so it was great to be able to use one of these flights to go to the Chathams and deliver these water tanks," he said.

"For some places in New Zealand like the Chathams it is difficult for them to freight these types of things so we were really happy to help out."

Paul and Donna Kerridge donated the tanks after forming a close bond with the Chatham Islands community through several visits to see friend Ray Murphy. The two men served in the RNZAF together.

Murphy passed away earlier this year, and when the Kerridges attended his funeral they noticed the need for water tanks.

"Water is a really precious commodity on the island. It's so windy, water is hard to get and there's no real reservoir for those living out of town," Mrs Kerridge said.

"The tanks will make such a big difference - for the community garden especially. Fresh vegetables on the island are extremely expensive, so being able to grow them for the older people in town is important."

"The cost to get one of these tanks freighted to the Island is phenomenal but the Air Force has made this a reality," she said.

"The lack of rain water storage for our gardens has stunted our ability to expand and grow our garden to its full potential."

The tanks will also assist three families to have a water supply on their properties as they prepare to build.