A NZ Post worker in Christchurch says he had to take a day off work after a racist message appeared on his scanner. 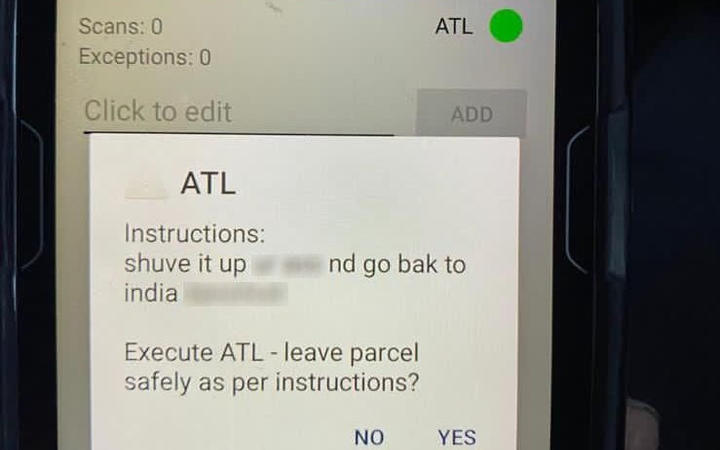 The worker was delivering a parcel on a street in Halswell, Christchurch earlier this week when he saw the message.

It popped up after he scanned the parcel's barcode where customers normally leave delivery instructions.

The message, which RNZ won't repeat in full, is an abusive slur which called for him to go back to his country.

"I'm living here in New Zealand since the last 10 years and never heard a single thing like that. I was really shocked at what happened," he said.

The post worker didn't deliver the parcel but took a photo and reported the incident to his manager.

His colleague later took over the parcel and the worker said he was promised an investigation would be carried out.

The man said he had to take a day off work.

The worker said the behaviour was not okay and he hoped the offender would not get away with it.

"Yesterday [Wednesday] was me and another day it could be anyone else. That's why we just want to try to make a strict action against that so that wouldn't happen in the future."

He said there was a sharp increase of racist complaints since the Covid-19 pandemic - at least 100 reports every week recently.

"We receive them in the service industries and schools and hospitals and the public, there's a lot of casual racism around."

Foon said abuses were harmful and hurtful, and people must remember that freedom of speech came with a responsibility.

"We encourage everybody to make submissions to the new hate speech [laws] review, and we are very hopeful that will help mitigate bad behaviour."

A NZ Post spokesperson said the incident was appalling.

"NZ Post does not stand for any form of racism. The safety and wellbeing of our people is paramount. This incident is abhorrent and unacceptable.

"We are taking this extremely seriously - the matter is currently with the police for investigation, and we are also carrying out our own investigation."

A police spokesperson confirmed they had received a report on the matter which was being assessed.

"Violence or threatening behaviour driven by hate is not acceptable and should not be condoned by anyone. Police is committed to tackling hate crime, and to improving the way we identify and record offences and incidents," police said.

"We're also focused on understanding what drives hate crime, doing the right things for victims, as well as holding offenders to account."

BNZ also said earlier it may close accounts of customers who were using payment reference to send abusive messages.