Opinion - Prime Minister Jacinda Ardern is set to formally apologise for the 1970's Dawn Raids on behalf of the New Zealand Government, (with a new date still to be announced due to a postponement because of Covid-19 restrictions).

This development came about after collective pressure on the Government to acknowledge such cruel and blatantly racist acts upon Pasifika residing in New Zealand - under the guise of targeting 'overstayers'. 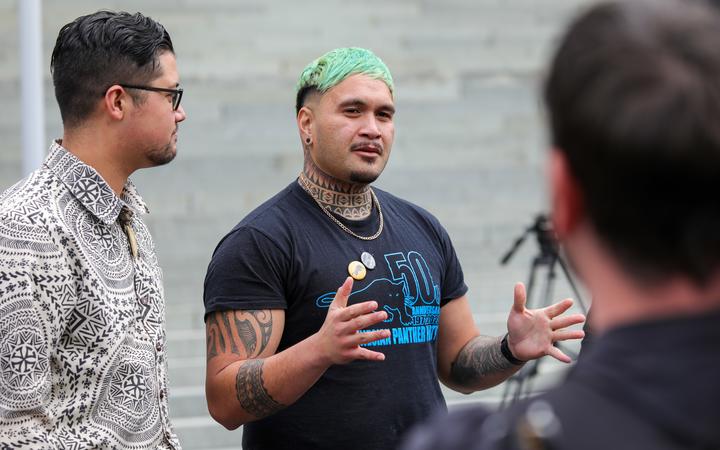 Benji Timu, talking at the steps of Parliament, after handing in the petition asking for a formal apology for the Dawn Raids. Photo: RNZ / Daniela Maoate-Cox

It was discovered that at that time Europeans made up the majority of overstayers. But were they subjected to random identification checks at early hours of the morning? Were their homes invaded by police officers and police dogs?

There have been many times when a police officer has needlessly asked me to provide identification.

For example, in 2012 I was driving home from the local library after studying for a few hours. I came to a police stop and was asked for my license, and then asked where I came from, to which I responded: "Studying at the local library, now heading home, sir".

The officer didn't believe me, he looked at my bag in the back seat and asked me to show him the books. I was only 18.

Racism doesn't just exist in spaces like the KKK or alt-right groups, it exists in everyday behaviour and attitudes. It can even be hidden in the narrative of "being equal."

This way of thinking is incredibly dangerous to people of colour, dismissing subtle forms of racism like unconscious bias.

School Strike 4 Climate Auckland was a group with ostensibly admirable environmental intentions. However, the group recently admitted to having racist bias and subsequently disbanded.

This was an organisation that attempted to fight against the destructive force of climate change. The group was forced to address its own inherent racial bias when it became obvious that it had ignored the voices of indigenous people, who are most affected by climate change.

Disbanding was very much taking the easy way out, and does not address the underlying problem of racial bias in environmental activism. What the group should have done is allowed Pacific voices to be at the forefront of their kaupapa.

What does decolonising look like? It doesn't mean hate the coloniser or 'let's burn all colonial statues', it means shifting our awareness and critically analysing the effects of colonisation on all levels.

Our society appears to have developed a subconscious narrative that normalizes racist comments and allows them to be misinterpreted or seen as satire, this downplays their harmful effect.

Recently a racist rant was left on the voicemail of Professor Dr Jemaima Tiatia-Seath after a public talk.

The caller told her that: "The European people brought so much to this country, they taught them to read and write"

"The Polynesians came here 60 years ago. Did they build churches, houses, schools, No!"

There is no mistaking the racist overtones of these statements.

Whether colonisation was good or bad, is an inherently problematic discussion, tied in with the notion of the "white saviour" complex.

Part of the illusory narrative of colonisation is that everything positive was brought by the colonisers. This devalues indigenous peoples as 'primitive' and incapable of advancement, a lesser people. Indigenous culture is not given mana or fa'aaloalo, or is simply appropriated.

It is uncomfortable to accept that Christianity was utilised as a tool of colonisation. There was a mutual belief in good moral behaviour between missionaries and indigenous people. Despite this commonality the missionaries believed that their iconography and narrative was superior, and should replace indigenous culture and identity.

As Moana Jackson once said: "Colonisation is a process of dispossession rather than a historical artefact". Racism evolves and becomes less obvious, instead becoming part of institutions.

Many of our Pasifika people have a mindset that stems deeply from colonisation. Sadly, they believe in the colonial narrative which prevents them from decolonising and reclaiming their identity.

To take control of the narrative a group of creatives, including myself, established a multimedia company called No Six. We aim to promote our history as a Pasifika diaspora in Aotearoa.

The mainstream media and education system have failed to confront the problematic and racist aspects of that history. For example, the Dawn Raids are only now being acknowledged as a particularly hurtful part of history and covered as part of the New Zealand history curriculum. This is progress, but only a small step in capturing the true story of Pasifika in Aotearoa.

*Benji Timu is a Sāmoan, Niuean and Kuki Airani film-maker whose aim is to change the narrative for Pasifika within the media industry.