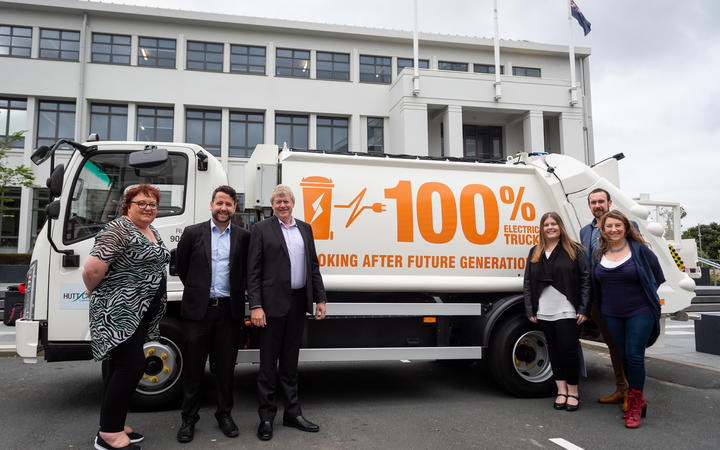 Mayor Campbell Barry said such problems were par for the course for a change in service as huge as this one, but the new operation had not been helped by the stalled delivery of 3000 bins currently sitting on a boat in the Tasman.

Lack of bins for many households meant the changes are being trashed by some residents.

Barry said it was to be expected, as it was the council's biggest undertaking in decades.

"No doubt about that," he said. "The size of it, we're interacting with every household every week: it is a big change, and one that is, in my view, absolutely necessary for us to catch up with a lot of other areas.

He said it was important to change the service, "to do the right thing by our environment, and make sure everyone's got access to an affordable bin as well".

Hopefully, the new bins will arrive on Sunday and be distributed by the end of the week. As a backup, they have provided each house currently binless with bags to put their waste into.

Some residents found it difficult to get a clear answer from the council.

"I still have no bins," one woman said, "[and] haven't been given any information about when I can expect to receive them, emails have not been answered.

" tried contacting the local counsellor but no response yet."

"When I can get through I have been told they are not on truck for delivery yesterday and promised a call back which doesn't happen and trying to call them hardly works and the line says 'your call is unable to proceed at this time please try again'."

There were further problems being reported on social media including reports of bins going missing or being stolen. Campbell Barry said teething issues were always going to happen with a change as significant as this one.

Meanwhile a slightly stranger conversation is also under way, centring around the little discs fastened underneath each bin.

These RFIDs link each bin to a property, but a small number of people have taken to social media with various conspiracy theories.

One hypothesised the tags were being used by the council to monitor what each household is putting in each bin, and that if it is the wrong item was in the wrong bin, they would be fined.

The council and elected members were all being proactive about debunking any myths.

"With the tags, it really is a way to be able to identify a bin with a particular house, and it just makes sense.

"I'm not too concerned about that - I think anyone who uses some common sense when looking at those sorts of posts or misinformation being put out there will see it for what it is."

Other residents complained about mixed messaging. On Facebook, one Wainuiomata resident had a calendar showing this week was the week to put out the blue bin ... but her neighbour's showed it was the week for the yellow bin.

Meanwhile, the arrival of Waste Management means companies who previously did rubbish collection have been put out of a job.

Al's Litta Binz owner Emma Gregory said the council's move came as a complete shock. The profitable family business started by her father-in-law Al 30 years ago was suddenly worth nothing.

They submitted a joint tender with their erstwhile competitor, Lo-Cost Bins, for the council contract.

"We went to every hearing, we submitted, we did everything we possibly could to be heard, to say what that meant for our business.

"But here we are, no longer in business."