Demand was so great among those wanting their drinking water tested for polluting nitrates this week, that some had to be turned away. 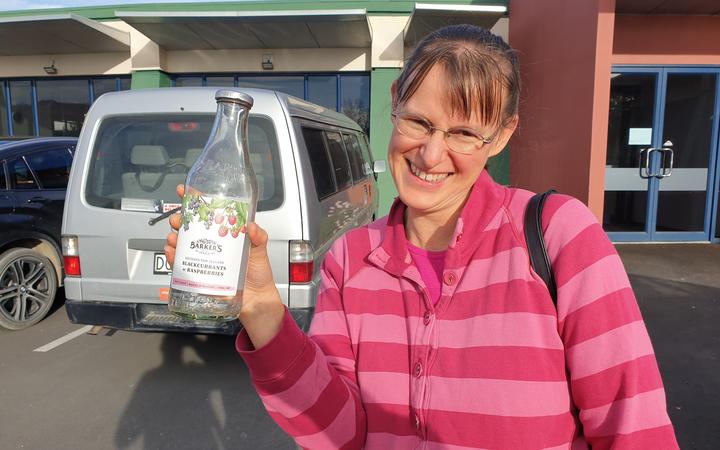 Gwenda Smithies was among roughly 140 people who lined up in Leeston to have their drinking water tested. Photo: RNZ / Conan Young

The tests were offered in the mid-Canterbury town of Leeston on Tuesday following recent publicity around a possible link between nitrates and bowel cancer.

When RNZ arrived, the carpark at the Leeston library was full to overflowing and the queue of people clutching containers of their drinking water was out the door.

The tests were done by the Canterbury Regional Council.

Top groundwater scientist Carl Hanson, who was there to answer people's questions, said nitrate levels in drinking water across this part of Canterbury had been slowly rising.

"Across most of the Selwyn district, nitrate concentrations are probably on average around five to seven milligrams per litre, but they vary from year to year. And we do, every year, get a few samples with concentrations above the drinking water standard of 11.3."

Those average levels were high - about five times what you would see in a large centre such as Christchurch - but as Dr Hanson explained, still under the 11.3 level mandated as safe by the World Health Organisation.

Above that level puts pregnant women and bottle-fed babies at risk.

Gwenda Smithies, a mother of 12, was among roughly 140 people who lined up for a test on the day, waiting for one and a half hours.

Her major concern was the risk of blue baby syndrome.

"Just for small children and pregnant women, combined with oxygen and you know the babies and causing damage to them. And we've got grandkids coming now so [we] definitely don't want contaminated water."

Smithies was happy with her result of 3.2mg, but said it was a nervous wait.

"I was hoping it was going be good. But I was sitting there listening to other people getting told that there was a problem, like quite a few people it seems were going 'oh no' kind of thing. And I was like, 'oh yeah, it would be really annoying to find out that you had a problem, because it's not an easy fix'."

Graeme Tweedie was pretty confident his nitrate levels would be higher than when they were last tested, and had already spent $15,000 on a filter that would at least lower the amount in his drinking water.

His main concern were the findings that even small amounts were linked to an increased chance of bowel cancer, and he wanted to see more done to restrict cow numbers in Canterbury.

"I do think some stronger measures have to be taken, and I'm not knocking the [cow] cockies, I'm commercially orientated, but they've got too much say on the water allocation."

One of those who missed out on getting his sample tested was cropping farmer David Birkett.

The last time he had it done was six years ago when it was very high - 9 milligrams, just two away from the safe level.

Even though the amount of nitrate his farm produced was very small, Birkett had made changes to try to bring it down further, and was keen to see others do the same.

He was encouraged by the high turnout among those wanting a test.

"Probably what it shows is the rural community is concerned about this just as much as the urban community. So I'm pleased to see turnout like this that shows that people are concerned, people are caring about what's happening in the environment," he said.

"It's a good sign, I think. I'd be more concerned if there was no one here."

The testing in Leeston followed that done in Darfield earlier this month.

It was organised by the Selwyn Waihora Zone Committee, which advised the council on water policy.

Greenpeace was planning another day for testing to be done in mid-Canterbury at the end of the month.