An 82-year-old Matamata man has been given home detention over the attempted murder of his wife in a suicide pact. 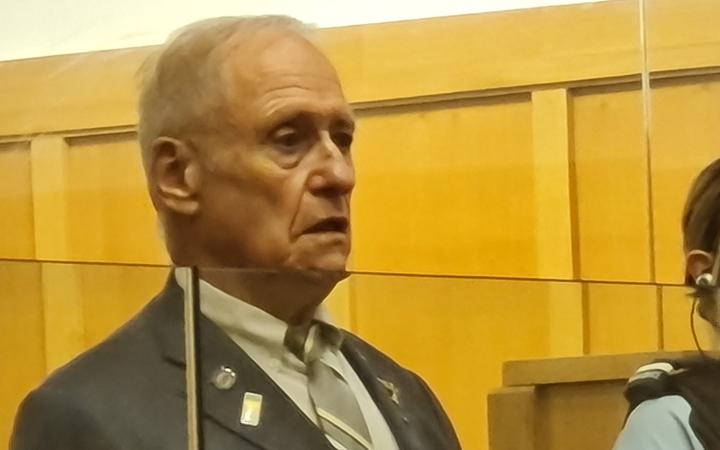 The judge agreed that Roy Morton has a deep emotional bond with his wife who suffered a severe stroke. Photo: RNZ / Andrew McRae

Roy Morton pleaded guilty in the High Court in Hamilton and has been sentenced to four-and-a-half months' home detention.

Morton was distressed by his wife's condition after she suffered a debilitating stroke and did not believe she was being well looked after.

He said they agreed to a suicide pact as she wanted to end her life.

Morton tried twice to carry out the pact using piping from his car's exhaust but failed.

The first time was in his car in his garage; the second time it was at a road layby but he was spotted by a passing motorist, who called police. Morton drove off and ended up near Karapiro where he was intercepted by officers.

The court heard Morton pulled out a knife and threatened to kill himself. He was arrested and his wife taken for medical treatment.

His lawyer, Roger Laybourn, said he now accepts his wife did not have the capacity to enter into a suicide pact.

He said his client loves his wife deeply.

''[He is] An 82-year-old married to his wife for over 57 years confronted with the unexpected tragedy of a severe stroke and losing his companion in the golden years they were looking forward to.''

The court heard that as a result of the stroke, Mrs Morton, who is 81 suffered significant physical, mental and cognitive disabilities and was unable to communicate.

Justice Davison said Mrs Morton has difficulties retaining and understanding information and is unable to display signs of reasoning.

He said Morton clearly has a deep emotional connection with his wife.

''You told the probation officer that despite her disability as a result of her stroke you believed that your wife nevertheless communicated with you in a non-verbal way by means of gestures.

"You say that at one point your wife used language from which you understood her to be saying that she wished to end her life.''

Justice Davison did not agree.

The judge set a starting point of 18 months jail, but reduced that taking into account the guilty plea, Morton's age and health and genuine remorse.

He said there were two aggravating factors.

''Namely your premeditation and Mrs Morton's vulnerability. Your actions were carefully planned and obviously premeditated.''

The court heard that the couple had no children and no relatives living in New Zealand. They moved to New Zealand from the UK in 1967.

Before the suicide pact, Morton sent an email to friends and family outlining what he was planning.

Mrs Morton's sister, who lives in the United Kingdom, provided the court with a victim impact statement.

In it she described the deep shock of receiving the email and that Morton had not yet apologised to her or shown any remorse.

She said she doubted her sister would enter into a pact because she deeply valued life.

Speaking after the sentencing, Laybourn described it as compassionate.

''I am always left with the feeling that the law is a bad fit for these particular actions, because when you have somebody who acts out of love and is then charged with attempted murder it doesn't seem to compute.

"Whether or not that means there needs to be an examination of some alternative charge, that's probably for other people to look at.''

He said the judge followed the law scrupulously and he had to balance the principles of the sanctity of life and protecting vulnerable people but also acknowledge "the extremely sad and stressful circumstances my client was under. In the end I thought it was very fair and very compassionate''.

''As we drove there [to the road layby] she had my phone on her lap because she doesn't like me having the phone while I am driving and I said to her, 'you do know the police can track us with that phone', and she immediately threw the phone out the window.

"She's completely coherent. I've got video recording of her talking to me.''

He said his wife is doing okay.

''She won't improve, she's not expected to improve but she's just a beautiful mind trapped in a body of no use to her. She just cries a lot. She gets very upset.

"She's still suffering but we are going to get over that and I hope one day she will be able to come home to me because I need her far more than she needs me.''

Morton said he is very happy now with the care his wife is receiving.