In a partial backdown, the government has softened its public sector pay freeze, agreeing to review the directive next year and leave cost-of-living increases on the table. 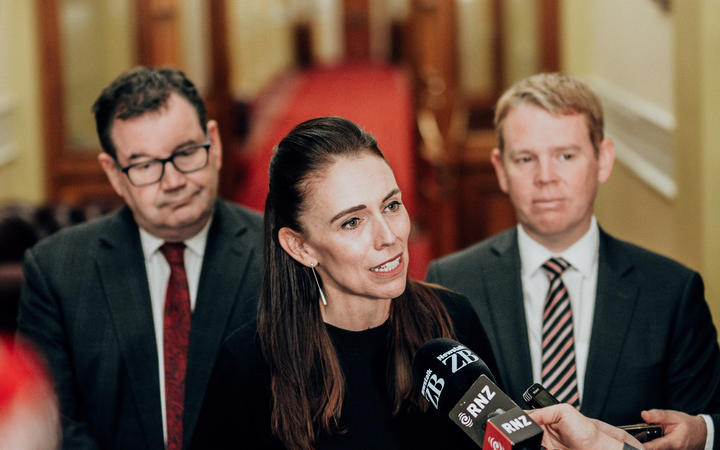 The Council of Trade Unions (CTU) and Public Service Association (PSA) emerged from crisis talks with senior ministers today, claiming the relationship was back on track following a number of concessions.

In a statement to media, Public Services Minister Chris Hipkins confirmed the government was open to discussing pay bumps in line with living costs, but denied it was a shift in position.

"Cost-of-living increases are in scope to be discussed during negotiations, as they always were," he said.

But Hipkins never acknowledged that point at Wednesday's announcement, despite being directly asked about the prospect.

Hipkins has repeatedly stated that public servants earning more than $100,000 should expect no pay hikes and those on between $60,000 and $100,000 in only "special circumstances".

Today, he said expectations around pay restrictions set out last week had not changed.

"The conversations we had today were constructive and recognised that for the public sector unions, the period of restraint was a particular point of contention.

Hipkins said both sides had agreed the restrictions were not a "pay freeze".

"Cost of living increases are in scope to be discussed during negotiations, as they always were."

"We are committed to accelerating pay equity and parity processes and prioritising wellbeing and workload issues."

CTU President Richard Wagstaff told RNZ the government had agreed that bargaining would be held "in good faith without any pre-determined outcomes".

"There's certainly scope to discuss cost-of-living increases in negotiations for all union members covered by collectives regardless of salary," Wagstaff said.

The government has also agreed to review its guidance at the end of 2022, instead of in mid 2023.

"We're in unusual and unpredictable times, and we've agreed to bring the review forward by a few months," Hipkins said.

"It's worth taking stock at the end of 2022 to see whether the situation has changed sufficiently to revise the guidance.

Wagstaff welcomed assurances from Hipkins he "intends to accelerate pay equity and pay parity processes to settlement, positively impacting on the gender and ethnic pay imbalance".

He said things were now "back on track".

"The whole announcement seemed to go badly in the eyes of members ... we're now back into bargaining with a better sense of what can be achieved."

Unions were "reluctant to buy into the idea that some kind of wage freeze was going to happen, we were quite keen to make it clear to the government - that can't just be announced, you've got to talk to us".

"And they have, and we've done that, and we've got a wage freeze off the table," he said.

In a release, the Public Service Association union said 'frank and constructive' discussions took place and they let ministers know that union members were left hurt and angry by the pay freeze extension.

"We've been blown away over the past week to see so many public workers raise their voice and challenge the prospect of pay restrictions. In their workplaces, in their communities and in the media, public servants took a stand and it's been heard at the very top," National Secretary Erin Polaczuk said.

"Our response to last week's pay announcement has required a team effort from unionists at all levels. Change happens when ordinary people are prepared to make it happen, and we will continue to bargain for positive change in the years ahead."

Prime Minister Jacinda Ardern said there had been confusion about what the "pay guidance" actually meant.

However, she said the PSA had highlighted that many public sector workers did not have step-based progressions and so would not see any increase in pay at all over the next three years.

"That is something that we're committed to working with public sector unions on."