The manager of a prominent businessman has been sentenced to 12 months' home detention for attempting to convince a man to drop his indecent assault complaint against his boss. 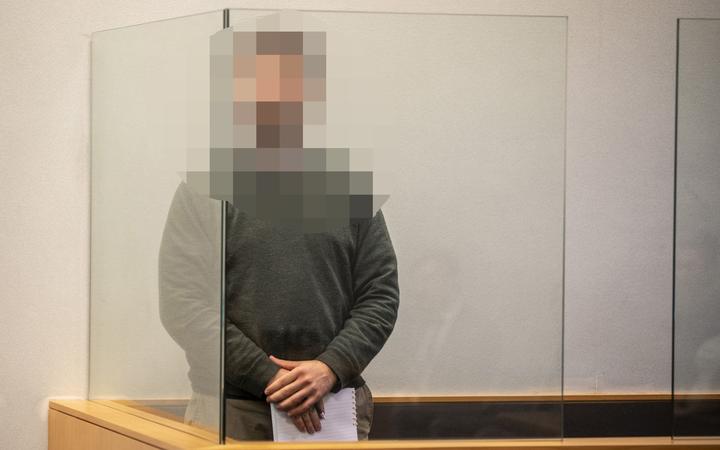 The manager during his sentencing in the High Court at Auckland today. Photo: Pool / NZME

The manager was found guilty of attempting to dissuade a witness after a four-week trial in the High Court at Auckland in March.

The prominent businessman was also found guilty of three charges of indecent assault, relating to three men, and two charges of attempting to dissuade a witness.

Both the manager and the businessman have interim name suppression.

In March, well-known entertainer Mika X was sentenced to 11 months' home detention after pleading guilty to two charges of attempting to dissuade a witness in the same case.

He said the offending was serious, calling the premeditated plan to convince the complainant to withdraw his statement "sustained and insidious".

Justice Venning said the manager and Mika X had met with the complainant and attempted to convince him to withdraw his statement, shortly after the businessman was charged in February 2017.

He said the manager then worked with PR consultants Jevan Goutler and Allison Edmonds to orchestrate a plot to again attempt to convince the complainant to retract his statement, during a glitzy trip to the Gold Coast in May 2017.

When the Gold Coast attempt failed, the manager again met Goulter and Edmonds to discuss their next steps at Family Bar on Karangahape Road.

Justice Venning said the manager's role was less important than others involved, but it was important nonetheless.

He said the manager allowed the prominent businessman to pay Goulter and Edmonds through his own bank account.

The manager had pleaded not guilty to the charges and Justice Venning was not convinced he was truly remorseful for his involvement.

However, he noted the manager's previous good record and letters of support from a wide variety of people, suggesting the offending was out of character.

He said the manager was a relatively young man and was naive to the commercial world at the time of the offending.

The prominent businessman and his manager were originally due to be sentenced at the same hearing today.

However, the businessman will now be sentenced on 27 May after his defence lawyer David Jones sought an adjournment on behalf of the rich lister due to health concerns.

In a court minute released last week, Justice Venning said the adjournment was sought due to the businessman showing a number of symptoms of concern to his doctor and specialists.

Justice Venning said the man's doctor had arranged a number of specialist tests, but the results would not be known and a treatment plan could not begin until 17 May.

In these circumstances, Jones had sought an adjournment of the sentencing to the week of 24 May, Justice Venning said.

He said the Crown's lawyer, Henry Benson-Pope, had provided a report from the health centre manager at Mount Eden Prison which confirmed in general terms the level of care provided to prisoners.

It also confirmed that if the businessman was imprisoned, any scheduled medical appointments could be accommodated to allow the man to attend with a custodial escort.

Benson-Pope had argued the sentencing should proceed as two victims intended to attend the hearing.

Justice Venning adjourned the sentencing, on account that more information was required to determine the businessman's health needs.

He allowed the businessman to stay in the community on bail while the tests were completed and his treatment plan confirmed.

While he regretted the inconvenience to victims, Justice Venning said a relatively brief further adjournment was in the interests of justice overall.