Emergency services based on top of the Alpine Fault in Franz Josef must be urgently moved, the Westland mayor says, after latest research indicates a devastating quake in the next 50 years is more than twice as likely as previously thought. 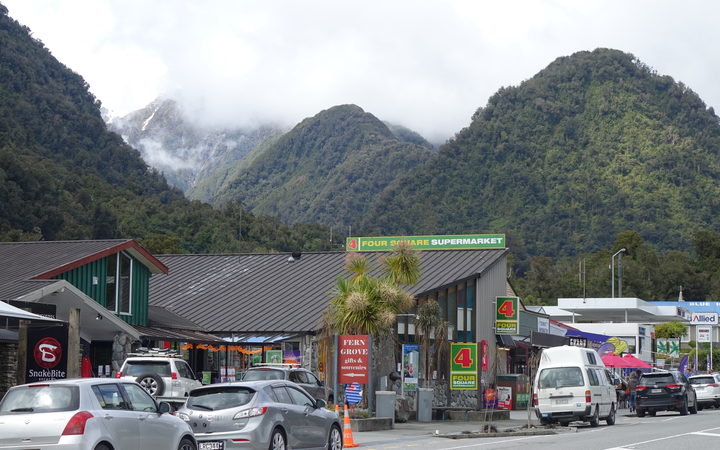 The study from Victoria University suggested a big quake could block South Island highways in more than 120 places, leave 10,000 people cut off, and cost the economy about $10 billion.

The 850km Alpine Fault runs up the western side of the South Island between Milford Sound and Marlborough, and poses one of the biggest natural threats to New Zealand.

The study concluded there was a 75 percent chance of a major Alpine Fault earthquake in the next 50 years, compared to earlier estimates that the likelihood was about 30 percent.

It also found an 82 percent chance of a quake greater than magnitude 8.

The most at risk areas are Franz Josef, West Coast, then the rest of the South Island.

Parts of Franz Josef could disappear into eight-metre wide crevasses, the report warned.

Even before this research, Westland District Council had been pushing for years for some of the key services that sit directly on the fault line in Franz Josef to be moved - but with little progress, Mayor Bruce Smith said.

The fire station, police station and the hall where people gather during emergencies were all on or very close to the fault.

"We've written to them all, and we've been working on it for some time. If this report does anything it raises the need to act a little bit faster than councils and government departments seem to be able to achieve.

"This is a time to actually do something."

In the event of an incident near Franz Josef, Fire and Emergency would work closely with local Civil Defence and the National Emergency Agency in a coordinated response.

A Fire and Emergency spokesperson said specialist equipment was stored in Greymouth to ensure they could respond immediately while waiting for specialist Urban Search and Rescue team members from elsewhere in the country.

They were also reviewing their Franz Josef site.

Franz Josef hotelier Logan Skinner said it couldn't just be left up to local councils to relocate emergency services and buildings positioned on top of the Alpine Fault.

"People have invested heavy amounts of money, they can't afford to just walk away, they have mortgages etcetera on those buildings.

"The council issued permits for a number of years to build on the fault line."

The risk for the wider West Coast

Other parts of the West Coast could also be hit hard by a major Alpine Fault earthquake, and potentially be cut off for weeks or even months.

Grey District mayor Tania Gibson said the report was not a surprise, but could prompt a funding boost to help them better prepare.

"If there is a big emergency on the West Coast, we still haven't really made a lot of ground due to funding in those areas. I think we really need to be seriously looking at those sorts of things. We've got some funding from the PGF (Provincial Growth Fund) which we are (using) to bring our port infrastructure up to a better level. So it's all those things we've been looking at". 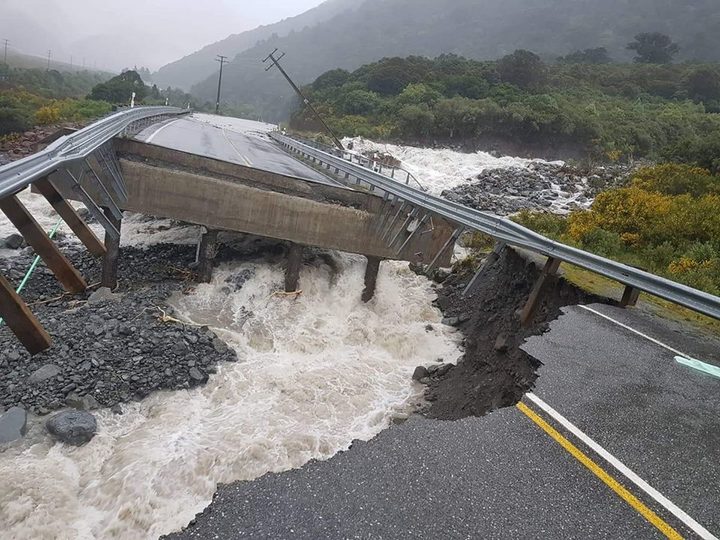 This bridge to Arthur's Pass collapsed after heavy rainfall lashed the West Coast in 2018. A large earthquake on the Alpine Fault could also create major damage to roads and bridges in the region. Photo: Facebook / Greymouth i-SITE

The government had prepared a response team called Project AF8 (Alpine Fault Magnitude 8), which was a collaboration between the Wellington Civil Defence Emergency Management Groups and their partner organisations. They had a detailed co-ordinated response plan for the first seven days following a severe Alpine Fault.

AF8 Project Chair Brian Paton said they had been preparing for a magnitude 8 quake all along, but what had changed was the urgency.

"There is a whole heap of issues that an AF8 fault rupture raises really, and Franz Josef is unfortunate in having the fault line go right through it, but I guess the research is saying the urgency and the need to do this is far greater than what a lot of people may have thought in the past."

He warned people should not just rely on local authorities, and said households, community groups, churches and marae needed a survival plan. 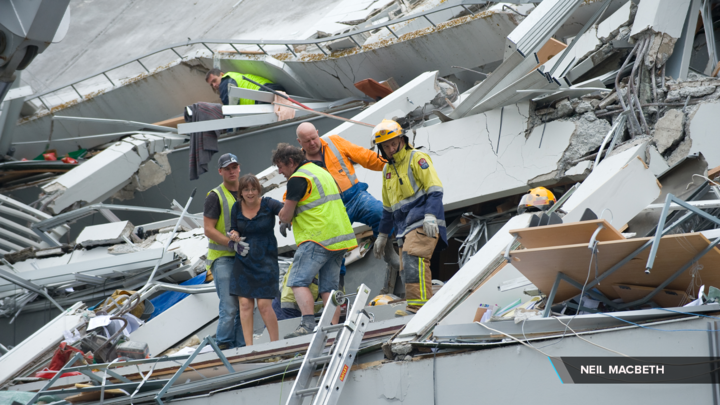 When asked if the government would help cover the cost of relocating homes and businesses within these quake danger zones the acting Minister for Civil Defence Kris Faafoi's office re-directed the questions to local mayors and government ministers, the energy and resource minister and the minister of infrastructure.

A spokesperson for his office later added, "AF8 is able to look across the entire system to identify vulnerabilities," but said decisions about infrastructure such as buildings and roads would need to be looked at by individual organisation such as councils, MBIE, EQC, and the Transport Agency.