Passengers "running on adrenaline" and feeling "ecstatic" are among the first to board Australia-bound flights from Wellington and Auckland today. 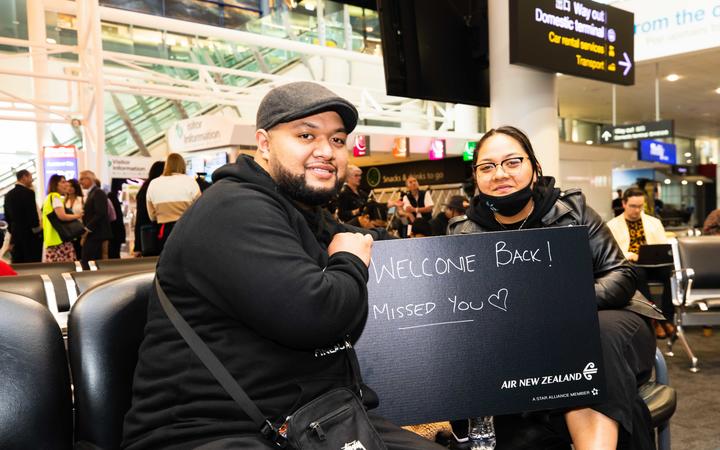 After a year of waiting, quarantine-free 'green' flights between Australia and New Zealand have begun today - only the second such travel bubble operating in a world still under siege from Covid-19.

RNZ reporter Tess Brunton who was among passengers on the first flight out of Auckland bound for Sydney was thrilled to land in the country of her birth and looking forward to seeing her family again.

#UPDATE The first planeload of people flying from Auckland to Australia under the Trans-Tasman bubble has landed.

RNZ reporter @TessBrunton489 on board reports: Auckland to Sydney has landed safely and early.

Latest updates in link below https://t.co/OkKgz2fG3C

Auckland woman Machelle told RNZ she was heading to Australia to see her daughter and mokopuna.

It has been 15 months since she's seen them and she could not disguise her joy at the prospect of seeing them and giving them a hug.

"Hallelujah. I'm just ecstatic because the last time I saw them, she just had her second child and I left when she was seven days old, so the universe has opened."

As soon as the bubble opened up she went online to book and was not worried about being stuck over there - her priority was seeing her family.

Daphne Allen from Pirongia in Waikato was heading across the Tasman to see her daughter and young grandson. She last saw them in March 2020. Her grandson is 17 months old - she's only seen him twice.

"It'll be great to see them in person. We've missed out on a lot," she said.

She was looking forward to giving them a hug and playing with her grandson.

Papamoa woman Hannah Halbert boarded one of the first quarantine-free flights to the Gold Coast today and said she was "running on adrenaline" after weeks of anticipation at the prospect of seeing friends and family again.

Halbert said she was with her family in Australia when New Zealand's lockdown began, and had to rush back.

She has not seen her twin sister since and was travelling to the Gold Coast with her daughter.

She was off to meet her partner for the first time, after the pair got together online a year ago.

Another traveller, Josh Nichols, was flying to Western Australia for work today.

He was relieved to know he could come back to his home country with a lot less hassle.

After two years working near Perth, Nichols said he had spent a few weeks in New Zealand visiting his friends and children.

He was due to return to work via Queensland last month, when his flights and border pass were cancelled due to a partial lockdown.

Nichols was making use of one of the first 'green zone' flights across the Tasman, from Auckland Airport.

He said not having the option to regularly see his children took a toll. 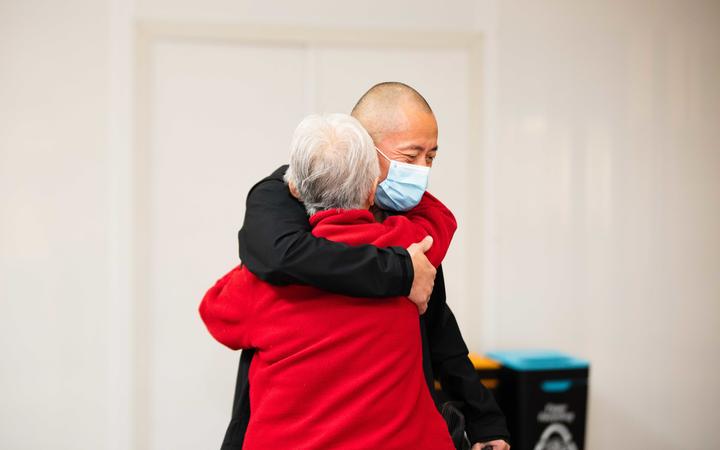 On the other side of the Tasman, there were equally excited travellers today.

In Sydney, Heather Lyberopoulos, 56, an anxious aunty ready to reunite with her sister, told the ABC she "had to be" on the first flight out.

"It's some sort of normality for me to be able to go home. I'm grateful," she said.

"I've missed one funeral, one graduation. We had to live stream, but we adapted."

She has booked a one-way flight, aware the situation could quickly change.

For Wilana Rawiri, 29, hotel quarantine was a "deal-breaker".

"We weren't going to go back, but we have a funeral so we're just blessed that it's opened up in time for us to go and pay our respects," she said.

Chasing winter, the couple will spend some time with family in Auckland before a move to Queenstown in time for the snow season.

"We had our flights booked for May last year ... so we've been waiting since then," Buckney said.

Godfrey said today marked a significant day in the pandemic.

"It's a massive point in the whole pandemic in terms of getting to that new stage of adapting to life," he said.

"It marks a new stage and I'm glad it's finally happening."

Buckney said the special position Australia and New Zealand were in during the pandemic, made travelling "feel natural".

"If I was flying anywhere else, maybe I wouldn't feel so calm," she said.

Other passengers were just as keen to take off.

You might not be able to see it but we are grinning from ear to ear! The bubble has begun between AusNZ .. #firstflight #travelbubble @sunriseon7 pic.twitter.com/3HkWZeDERQ

Lasi is heading back to Wellington to surprise her 6-year-old for the first time in one and a half years! She says there’s going to be lots of happy tears @SBSNews #transtasmanbubble #nz pic.twitter.com/dynbCqwO2e

Mum Casey is taking daughter Sophia home to meet the family for the first time. She says she’s feeling ALL the emotions @SBSNews #bubble #nz pic.twitter.com/eo8Ra0fYgi

Follow RNZ's blog on day one of the Trans-Tasman bubble