When the $50 million upgrade of the quake-prone Yarrow Stadium is finished, Taranaki rugby fans will still be using seats installed at the turn of the century. 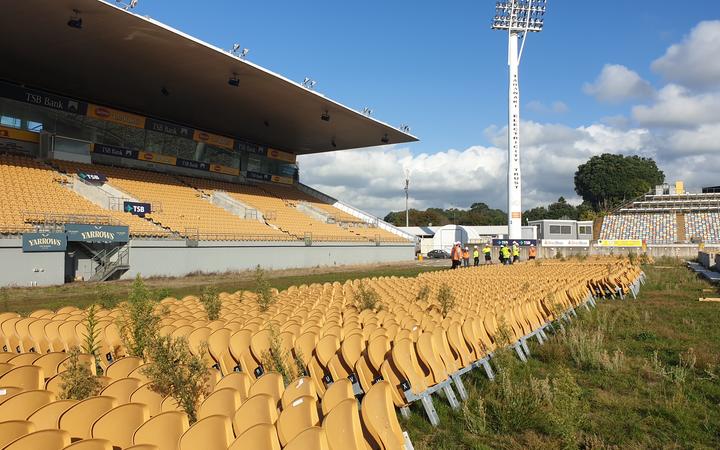 West Stand seats have been stacked on the pitch while repairs are done. Photo: RNZ / Robin Martin

The Taranaki Regional Council, which owns the stadium, invited media to a site tour.

About 5000 plastic seats from the under-repair West Stand are stacked exposed to the elements on the pitch waiting to be reinstalled, alongside the concrete bleachers they are attached to.

Director of corporate services, Mike Nield, said the 4500 seats in the East Stand - where demolition work begins next week - would also be reused.

"The seats themselves are actually in good condition and they've still got life in them, so they'll be reused and there was no consideration given to installing replacements at this stage.

"You'll appreciate, the whole process is under a reasonably tight budget so where we can reuse and save money we'll absolutely be taking those options."

Nield said the West Stand seating fitted together like a giant jigsaw puzzle and the seats would get a good scrub up before being reinstalled.

He reckoned rugby fans would not be worried about the same seats going back in.

"I think Taranaki rugby fans look forward to the day when they can return to Yarrow. I think if they've got a seat and they are undercover they'll be very happy." 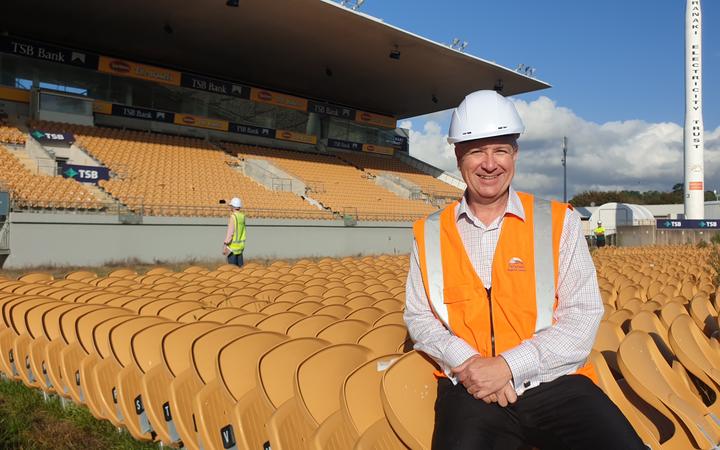 Nield said it was possible the East Stand seats would also be reinstalled in its replacement, although they could be redeployed on the South Terraces.

The $2 million East Stand demolition project is being undertaken by Christchurch company Ceres.

Nield said the demolition would take place in four-phases beginning with the removal of any material that could be salvaged, including the seats.

Then cranes would move in to remove the roof.

"The first crane at the back of the stand is going to snip away at the concrete and steel holding the roof in place and then they'll be a crane at the front that slowly brings it down."

The super structure would then be brought down before the final phase, the clearing out of the foundations.

He said the repair of the West Stand was going as planned and new lights and turf would also be installed before the stadium reopened in February 2021. 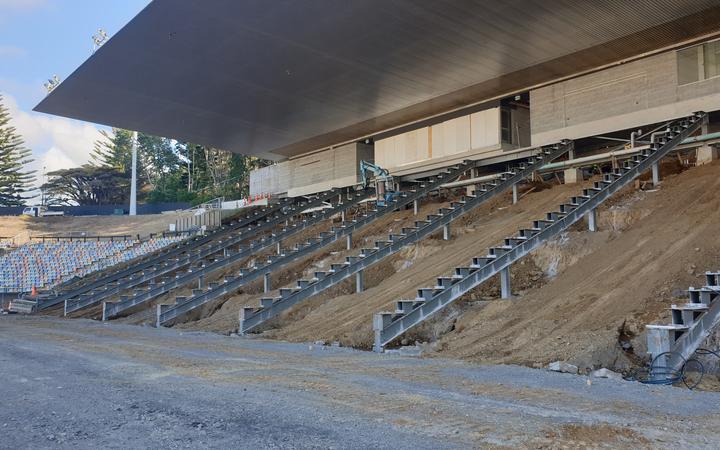 Repairs to the West Stand, including installing 13m anchors to fix the stand in place, are progressing on schedule. Photo: RNZ / Robin Martin

"So when the stadium is up and running again it will be with a repaired West Stand, a new field, new lights and a cleared and demolished East Stand."

The new East Stand is scheduled to be completed by December 2024.

The government is contributing $20 million to the Yarrow Stadium repair and upgrade as part of the shovel-ready projects initiative.