A $91 million multi-sports hub proposed for New Plymouth Raceway and the $50 million upgrade of Yarrow Stadium in the city are not mutually exclusive, according to its backers Sport Taranaki. 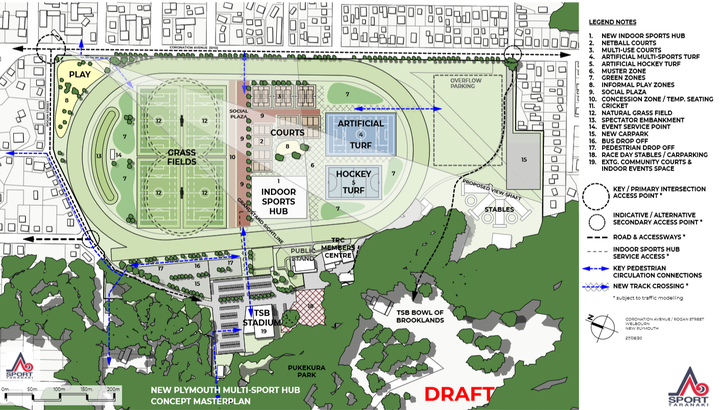 An artist's impression of the layout of the $91m sports hub proposed for New Plymouth Raceway. Photo: Sport Taranaki / Supplied

The region's sports trust is leading a drive to get the multi-sports facility included in the New Plymouth District Council's long term plan.

Designed to plug gaping holes in the city's sports infrastructure, the master plan for the hub was revealed by Sport Taranaki chief executive Michael Carr this week.

If it goes ahead, the hub will include a six-court indoor stadium, a hockey turf, and facilities for a range of other sports and activities including rugby, netball, football, volleyball, badminton and cricket.

Carr said two sports infrastructure projects could complement each other.

"What we are making a commitment to do is make sure we create networks so we so there's not duplication.

"I see Pukekura Park, Yarrows and the multi-sports hub operating together and being connected and I'm committed to making sure we create a really powerful network."

The Yarrow Stadium project recently got a $20 million boost from the government's shovel-ready fund.

It includes the repair of two quake-prone grandstands and upgrades to support professional rugby, but it also has a focus on community sport.

Carr said the multi-sports hub would be rolled out in stages to help manage costs.

"The first phase, which includes the indoor stadium, hockey turf and supporting infrastructure, has been costed at $62.5 million."

He said getting the project into the long term plan would be crucial in terms of funding.

"From the long term plan, council will make decisions about what its contribution is and then we'll look for external funding around central government and some of the other funding arms available to us."

Sitting behind the project is a 2019 Community Sport Facility Needs Assessment which revealed an urgent need for indoor courts and artificial turf in New Plymouth.

It found hockey, basketball and volleyball player numbers were surging and courts and turf were struggling to cope. 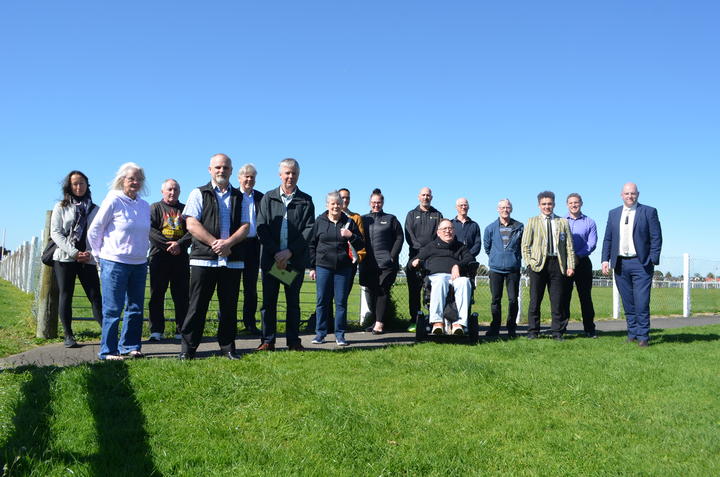 Members of the multi-sport hub reference group at the launch of the plans 3 September 2020 on site. Photo: Sport Taranaki / Supplied

In 2019 hockey had 1809 registered players in Taranaki, with nearly 1200 of these in New Plymouth. The number of hockey players across Taranaki increased 31 percent in four years.

Basketball grew 9 percent to 2160 registered players in New Plymouth and volleyball 48 percent to 320 in the same period.

The analysis showed basketball, volleyball and hockey did not have enough space while premier netball was also short of indoor competition space.

Carr said the multi-sports hub project was a once-in-a-generation opportunity that would have far-reaching community and health benefits.

"Our sports people are crying out for this facility and as a community recovering from the impacts of Covid-19 we need ways to make it easier for people to get more active.

"This hub will be much more than a sporting facility, this will be a focal point for a more connected and healthy community".

Carr said while the cost of the project was significant, improving health outcomes across the community through welcoming, easily accessible and flexible leisure spaces critical.

"This project is not just about sporting infrastructure; the health of the community is at its heart. Our community infrastructure has been built when our leaders showed courage and vision and built for the long term."