Auckland's water reservoirs are half empty again - nearing record lows - but this time authorities are not so worried. 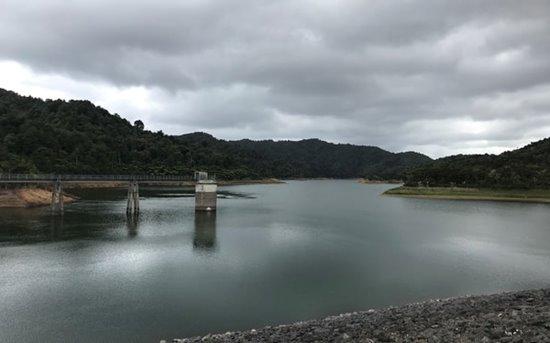 Wairoa Dam in the Hunua Ranges on 6 April, just over half full. Photo: Supplied / Watercare

Multiple projects to increase water supply and processing mean the city's not feeling the same pinch as it was 12 months ago.

One of the most severe stretches without rain in the city's history left reservoir levels below half full, at historic lows.

This year reservoirs are barely any better - this week just 52 percent full.

But Watercare isn't too worried. They've spent the last 12 months upgrading and reinstating bores, reservoirs and treatment plants in order to boost the city's water supply.

"So the total amount that is coming on stream before next summer will be a little over 100 million litres of additional water being put into the system each day," Bourne said. "To put that in perspective that the equivalent of about 330,000 Aucklanders' use of water."

Another 100 million litres a day is about 25 percent of the city's current daily use. About 40 percent of Auckland's current water take is from the Waikato River, with just over 50 percent coming from dams, and a single digit percentage coming from groundwater sources.

Auckland is still sitting under water restrictions, but they're not all that restrictive - the average person can do almost anything but use garden sprinklers, or leave hoses running unattended.

A normal amount of rainfall is expected over the next few months but limits are staying, at least for the time being.

Mark Bourne points out even if they do stay longer term they're not too harsh.

"At this point it's probably just a little bit far out to determine whether restrictions will be required over next summer," Bourne said.

"If we look at the type of restrictions we've had in place this summer, it's meant that people have been able to use a handheld hose in their garden, we've been able to clean our houses and maintain our properties."

The climate forecaster NIWA said a normal amount of rain is likely over the next couple months.

"It's going to take more than just 'normal' rainfall to alleviate the stresses on the various systems - the soils, to the waterways, streams and rivers and dams - that will all take time.

"We're going to still be dealing with the effects of drought conditions from the last two years for some time to come."

Aucklanders saved 15 billion litres of water over the last year. But even with more supply coming on board, it seems the conservation effort isn't over.