An original Banksy painting sold for $1.7 million in Auckland last night making it the most expensive work by a contemporary artist ever sold in New Zealand. 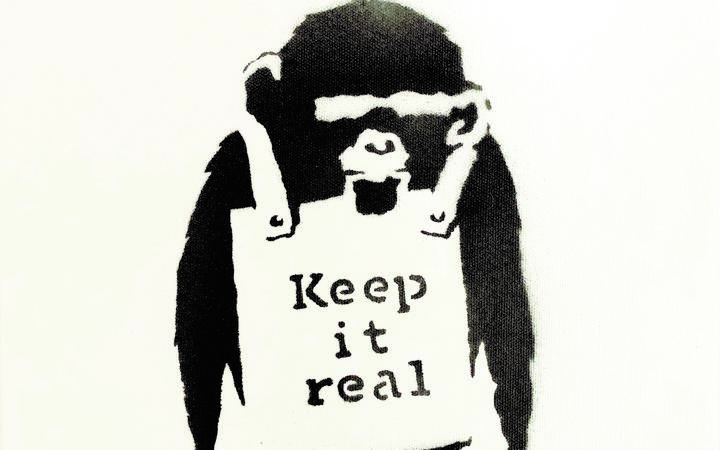 The 30cm square painting by the anonymous British artist depicts a chimpanzee wearing a sandwich board saying 'Keep it real'.

But, a fierce bidding war at the International Art Centre in Parnell took it over $1.4m, then the buyer's premium pushed the price up again, to $1.7m.

Five Banksy screen prints were also up for sale at last night's auction.

International Arts Centre director Richard Thomson said Banksy's work resonates with people and the fact that he is anonymous adds to the mystique.

"He really is the modern day Michelangelo, every century has its artist, Banksy is this century, Andy Warhol was the 20th century, Van Gogh was the 19th."

He said a Banksy painting sold for $30m at Christies last week.

"So our price was comparatively small compared to that - but so was the painting."

In 2018, the canvas of a Banksy painting which had already sold for more than £1m at Sotheby's in London then unexpectedly passed through a shredder installed in the frame.

Asked whether buyers should be wary after the shredding incident, Thomson said not necessarily.

"The rumour is in the trade that that painting is worth three or four times more now, just because it is shredded.

He said 'Keep it real' was sold by a New Zealander and this is the case with most of the Banksy paintings which have been sold in this country.

"Most of them were Kiwis who lived in London between 2000 and 2008 and have returned home with their goods."

Banksy prints at that time were fairly affordable in stalls like those on Carnaby Street, he said.

"I have seen screenprints, I've sold screenprints for a couple of hundred thousand dollars that were £90 new."

Thomson said the Covid-19 pandemic has worked in favour of New Zealand hosting this auction.

"Many of these Banksy's would have gone offshore but because the auction houses around the world had to close shop Kiwis still had to sell their goods, so they had faith in us to do this and we've built a reputation internationally now as resellers."