Three works by elusive and controversial guerilla artist Banksy are set to go up for auction in Auckland next week. 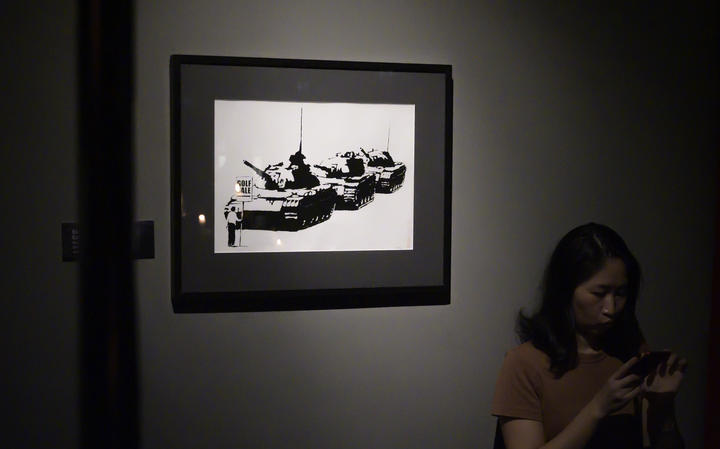 A woman uses her phones near 'Golf Sale' by English street artist Banksy during an exhibition, 'Street Art in Blu'. Photo: AFP

Pieces by the anonymous artist are more usually sold in London or New York, so how did they end up here?

"Originally, these were purchased in London by the New Zealand owner in 2006 at a place called Pictures on Walls. Pictures on Walls was the Banksy agent at the time and a New Zealander walked in there, like many at the time, and Banksy was pretty hot back then, 200-300 pounds a piece and he bought three of them, hung them in his flat in London.

"He enjoyed them for 15 years and brought them back here to Auckland ... then Covid's come along and he could do with a bit of cash so he's decided to sell them, but selling them in London isn't the wisest move at the moment, so he's consigned them to our auction, which we're pretty thrilled about, to be honest."

Thomson said it would be a live auction, giving people a chance to see the artworks.

By selling in Auckland, he would avoid the costs associated with having to send the works away for auction.

"We will get just as much for them here in the end, when you start adding things up."

There had been interest in them from all over, Thomson said.

"We've had quite a number of people contact us about the condition of them from London and Europe and what have you."

As for the artworks themselves, they are Golf Sale, Soup Can and Weston Super Mare.