A massive double-trailer truck lost half its load on a highway outside Kaikōura because most of the welds holding the refrigerator box on the chassis had snapped. 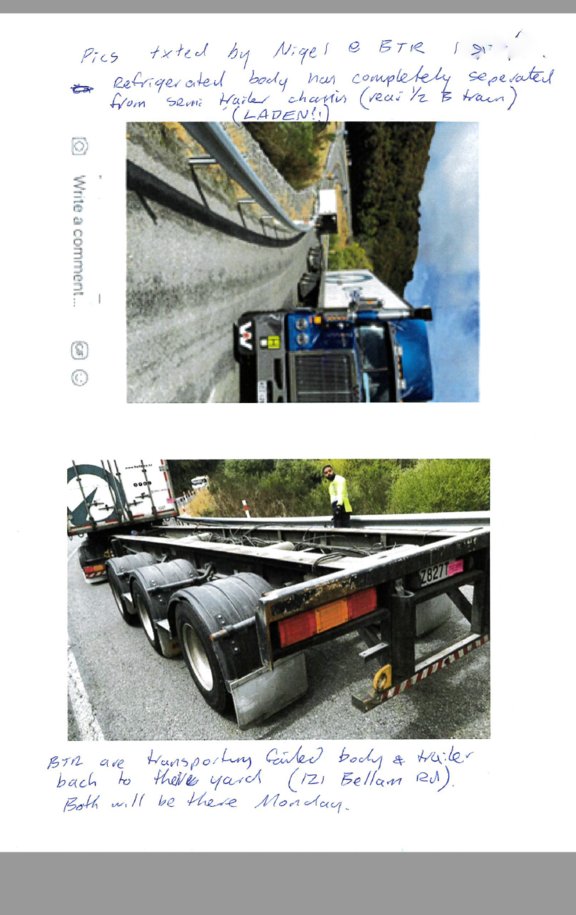 All 21 welds on the left of the chassis holding the box were worn, rusty and broken before the crash, and six out of 21 on the right were the same, an informal report by an engineer stated.

The accident went publicly unreported a year ago but shook up the industry.

Questions remain over the safety flaws exposed by it and whether imported heavy vehicles are being checked enough.

The refrigerator box - it is unclear if it was unladen (three tonnes) or full (15 tonnes) - snapped off the back of the truck in early last January on State Highway 70, the inland route from Kaikōura.

It fell on to the road behind the truck.

"This could easy [sic] have killed people," the heavy vehicle engineer said.

"Get all of these bodies out of service immediately for checking," the engineer advised NZTA.

The truck was operated by major South Auckland hauler Hall's.

It is understood to have grounded its fleet of these trailers while an official investigation was carried out.

The busted trailer had been built by one of Australasia's biggest truck makers, the listed Victorian company, Maxitrans.

"The welding issue was the result of a manufacturing fault," Waka Kotahi said.

Investigators found 37 trailers around the country with the same welding defect.

NZTA said it responded immediately to warn the industry and find a fix.

Maxitrans inspected and fixed the vehicles "then reviewed their manufacturing processes to ensure the issue was resolved", NZTA said.

The Transport Agency's initial statement only faulted the manufacturing.

When pressed, it admitted the design of the trailers was flawed, too - that it had established the plug welds were being used on their own, and this was "insufficient" to hold the body to the chassis.

"A revised solution ... was designed by Maxitrans, and the repair concept was reviewed and accepted by Waka Kotahi technical experts.

"Independent certification of the repairs was required and conducted."

It was ot aware of any concerns about the changed design, NZTA said.

However, RNZ is aware of questions over how rigid the redesign has made the trailers.

Maxitrans has been approached for a comment but has so far not responded.

In a statement, a spokesperson for Hall's said its fleet was inspected and any issue found and dealt with, and the whole industry also took "appropriate action".

"We take safety very seriously at Hall's - we follow a regular maintenance programme and meet all Waka Kotahi inspection requirements.

"Hopefully any coverage won't leave viewers with the idea there's a safety issue with our fleet," they said.

Emails from January 2020 obtained by RNZ showed that engineers were finding trailers with the broken plug welds.

"I saw this one today that had about six plugs completely gone and several more with signs of cracking," one wrote.

Another - the engineer who wrote the informal report - said: "This is very likely an incredibly serious and widespread safety problem that needs urgent action."

Some engineers said that plug welds were the wrong choice to hold on high-sided containers on the country's windy roads: that they are prone to crack, and hard to spot when they do.

Broken welds are "not easily identifiable", so it had advised vehicle inspectors to look at them more carefully, NZTA said.

"Waka Kotahi is not aware of further incidents of this nature but encourages anyone with concerns to contact us directly."

Crucial elements such as towing connections and anchor points for loads must be certified for both their design and manufacture.

However, the connections of containers to the chassis do not need certifying.

"Certification of the join between the container and chassis was not required, as vehicles with this type of structure are required to meet manufacturing standards that support New Zealand land transport requirements," the NZTA said in a statement.

However, some engineers said they worried these standards were not being enforced.

The welding on the trailer that lost its box was "poor", the engineer's informal report said.

Furthermore, while a New Zealand-made chassis must be certified, an imported chassis can get a rating from NZTA on the basis of not much more than a photograph and the manufacturer's rating.

The Truck-Trailer Manufacturers Federation, while it was "satisfied with the investigation" and the fix in the Kaikōura case, was concerned about imports.

It had been in talks with NZTA since the Kaikōura accident, about quality controls over imports, Bucknell said.

In 2018, NZTA issued a safety alert after Maxitrans found a problem with skidplates cracking, where an articulated truck unit connects to the trailer.

After that alert, Waka Kotahi introduced a new maintenance process.