Orientation Week - or Ori, as its known - is underway at the University of Otago. 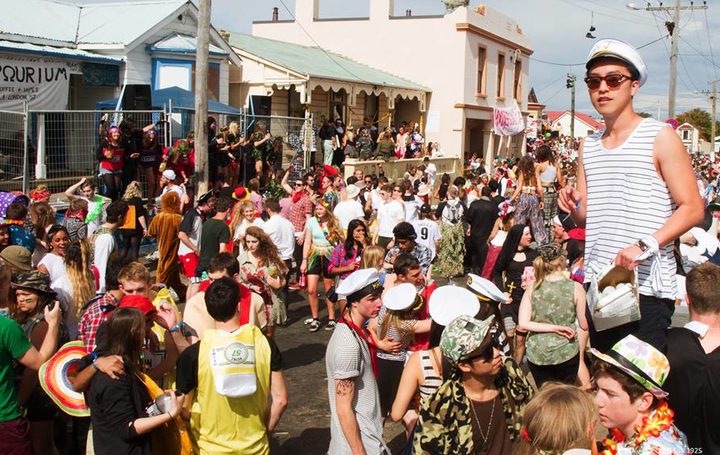 In years gone by, this meant trouble for Dunedin and its emergency services.

Just over a decade ago 2000 first-year students wearing bed sheets marched down Dunedin's main street for the annual toga party and they were pelted with eggs, vomit and much, much worse.

It set the stage for 2009's O-week, but the chaos was also a forerunner for what was to come later that year.

Riots in Castle Street following the Undie 500 in September that year led to 80 arrests.

The scene of police retreating from a burning street under a hail of bottles, caught the eye of then prime minister, John Key, who described the scenes as madness.

But the university's vice-chancellor, professor Harlene Hayne, said a corner had been turned since those dark days were broadcast internationally.

"We've obviously made it harder to get into the University of Otago, increasing our academic standards, and we've made it easier for you to get yourself excused either for academic or behavioural reasons," she said.

"We've taken the time at the beginning of each year to sit down with our 4000 incoming students with our opening convocation ceremony and given them the opportunity to reflect on why they're really here.

"We've developed the social impact studio which has been a huge success in helping our students to engage with the wider community and in 2019 before Covid our students contributed more than 40,000 hours of voluntary service into the community." 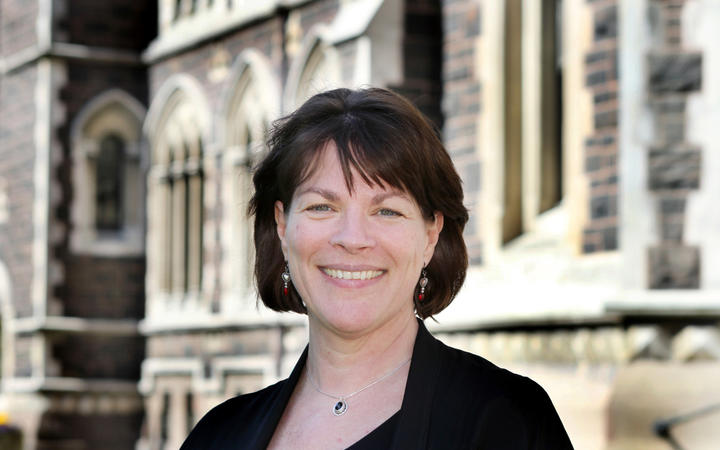 The university encourages new students to reflect on why they're in Dunedin, vice-chancellor Harlene Hayne says. Photo: University of Otago

'One of youngest suburbs in world'

But the University of Otago is unlike any other tertiary institution in New Zealand - its Dunedin campus sits at the heart of surrounding suburbs which house the vast majority of its 20,000 students.

The nearby Otago Polytechnic also attracts young people to the area and the community has something of a party vibe, which in years gone by have, at times, got out of hand.

"So when you get that high concentration of young people together, you're bound to get a few problems," Hayne said.

"But the vast majority of our students are incredibly well-behaved, community-minded young people who have come here for a world-class education and an opportunity to meet some other young people like themselves."

The university had taken an increasingly interventionist approach, playing a role in organising the annual Hyde Street Keg Party after 10 people were arrested and dozens taken to hospital in 2012 - an event punctuated by the collapse of a flat's roof.

Measures like an increased security presence around the campus area and CCTV had drawn criticism from students past and present as some claimed the university was acting as the fun police.

But professor Hayne made no apologies for the interventionist approach and said it had helped curb out- of-control behaviour.

"There is no funner place in New Zealand right now than the University of Otago," she said.

"There are 20,000 young people who are literally having the time of their lives ... this is a wonderfully fun place to be a young person.

"The only thing the university tries to do is keep body and soul together while these young people are taking their final steps to adulthood and we'll never make any apologies for that. It's our job to keep them as safe as possible."

The numbers back her up. Couch burning had long been a bugbear for the city's authorities, but setting fire to furniture was long seen as a laugh and something of a rite of passage for scarfies.

In 2010 more than 250 fires caught the attention of the university's leadership.

Couch burning was en vogue and a few years earlier a local student pub offered up a petrol-soaked couch and matches to be won in a promotion.

But an effort to stamp that out by the police, Fire and Emergency and the university was showing success.

Sergeant Ian Paulin said a close call at a student flat a few years back resulted in change.

"It took a pretty serious fire, pretty close to a wooden villa for everyone to realise this is going to go bad and we're going to have a lot of people dead," he said.

"There was a real change almost instantaneous. This year - and I'm touching every bit of wood in my office - we haven't had a couch fire. It just seems to have really disappeared from the student's thinking."

But the closure of student pubs had seen them retreat to their flats and onto the streets. 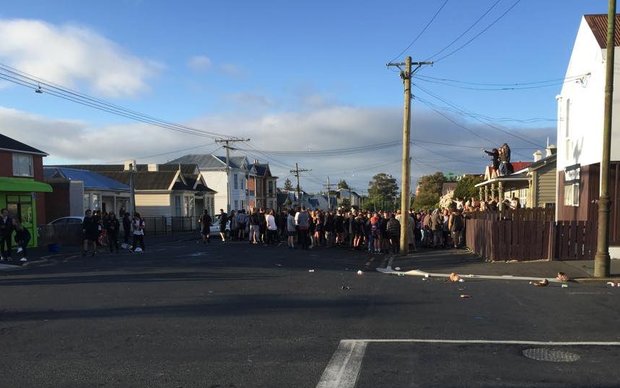 A party on Castle Street, Dunedin, about 8am on Sunday 1 November 2015. Photo: Twitter / @doryrempsey

The pubs pointed the finger at the university, but their days were numbered as liberalised liquor laws resulted in cheap booze being readily available at liquor stores and supermarkets throughout the north end.

"What would really help us is if we had a couple of large-capacity licensed premises that the students could drink at. I think they would love that, we'd get them in a controlled environment.

"But until we have a change in the price differential between an on-licence and an off-licence it probably just won't happen," Paulin said.

As the city's alcohol harm prevention officer he had seen the effect of alcohol on North Dunedin's young populace, but rather than fighting them on it the police were trying to work with them - acting as something of a parent in a blue uniform.

That was why the police were taking a more relaxed approach to student street parties, as they realised pushing them into crowded and confined spaces presented a greater danger.

Paulin said one area he hoped to improve this year was the cleanup following those parties.

"If you drove down Castle Street at seven o'clock in the morning it's a sea of glass and rubbish. It's not a pretty sight," he said.

"Basically that's the university flatting area; if they took some ownership of the cleaning up I think that'd be a real step forward." 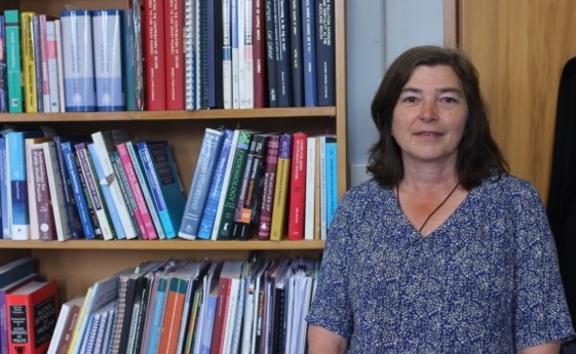 It's a view that has the backing of Emeritus Professor Jennie Connor, who carried out research into the drinking habits of scarfies.

She said the academic side was clear and without changes another generation of New Zealanders would inherit a harmful drinking culture.

"I personally don't believe we need more research to do the things we need to do to improve the situation with alcohol in New Zealand," she said.

"We need to implement the recommendations that have already been made ... and the other thing we should do is our government should stop commercial interests having the ability to interfere with policy making in New Zealand."

"I still see it as something that's pushed as an integral part of student culture and it's the social pressure to drink.

"You don't come across it all the time and I think it does stem down to that, what I see, as a toxic masculinity problem within university culture," she said.

"That stems from that colonial past that we've inherited from what was the bad drinking cultures in the United Kingdom and in Ireland, where there is that toxic masculinity and drinking culture embedded into it - that still exists here.

"The University of Otago, being the oldest university, has existed long enough to have those behaviours embedded in here.

"I think we are seeing a shift as we break down those barriers at university, as we see a more diverse population. I think diversity breeds better behaviours, more understanding, more social accountability as well."

The association had taken a leading role in mitigating the dangers of heavy drinking among students, organising the Hyde Street Keg Party since 2013 and moving the toga party into a controlled environment.

The tragic death of Sophia Crestani at a flat party in 2019 had given all students a wake up call, Waite-Harvey said. 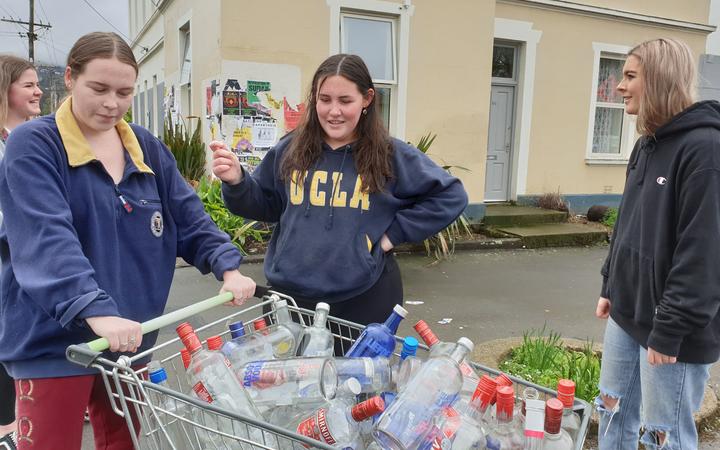 Students help with cleaning up the streets in the days after Sophia Crestani's death. Photo: RNZ / Tim Brown

This year's toga party - spread over two nights - went down without incident.

Ori wrapped up with the International Food Festival and a series of gigs at the weekend.