Niwa and other organisations tracking weather and climate say La Niña has arrived for New Zealand, and on top of that, the next three months are likely to be warmer than average, marine heatwaves may develop and the tropical cyclone risk is higher. 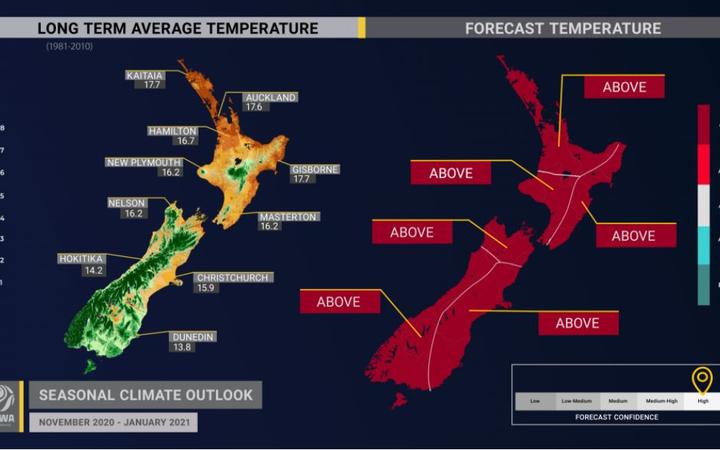 First, what is La Niña?

La Niña is one of the three phases of the weather occurrence known as the El Niño-Southern Oscillation (ENSO).

This includes the warm phase called El Niño, the cooler La Niña and a neutral phase.

It occurs when equatorial trade winds strengthen and blow the warm surface waters of the Pacific away from South America and towards Indonesia.

In their place, colder waters from deep in the ocean come up to the surface.

La Niña can happen every three to five years.

What does La Niña mean for New Zealand during summer?

If you have 1️⃣ minute, we'll tell you!

Here's what this climate driver has historically meant to Aotearoa in terms of:

What does it do?

MetOcean Solutions say La Niña brings a tendency for warmer than average ocean and air temperatures for New Zealand once it becomes established.

For New Zealand, it means high pressure can linger to the east of the country during summer, causing more north easterly winds than usual.

Northern and eastern parts of the country tend to have a wetter than usual summer, while southern and western areas are often drier and more prone to drought.

Overall, summers tends to be warmer and more humid than average.

MetOcean Solutions senior oceanographer Dr Joao de Souza, said in a statement from the organisation earlier in spring that typically, the stronger north-easterly winds produced to the north of New Zealand, often lead to larger waves on the north coast from Cape Reinga to East Cape.

"Increases in the frequency of occurrence of storms were observed in the past for the north coast during La Niña years. The sequence of storms with a short time interval in between significant events can result in increased beach erosion due to the insufficient time for the beach to recover - for example.

We are watching closely.

Niwa's climate outlook for November to January says marine heatwave conditions may develop in the ocean surrounding New Zealand, with air temperatures very likely to be above average in all regions of the country.