There are two positive cases of Covid-19 aboard the Sofrana Surville, Queensland Health authorities say. 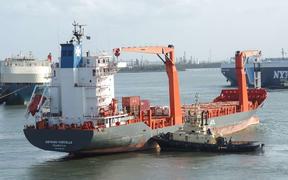 The boat is the suspected source of an infection in a New Zealand port worker, whose case was revealed on Sunday.

In a statement this afternoon, New Zealand's Ministry of Health said the new positive test results supported the hypothesis that the port worker could have been infected while working on board.

The Sofrana Surville had travelled from Papua New Guinea to Solomon Islands to Brisbane to Tauranga to Auckland, where eight crew joined it from the Philippines on 13 October.

The worker, who was an engineer, was on board on 12 and 13 October and was wearing PPE while conducting maintenance work.

The engineer's strain of Covid-19 had never before been detected in New Zealand, and has not been seen in Australia.

The Sofrana Surville then travelled to Noumea and is now in Australia. The ship was ordered to anchor off the coast of Mooloolaba instead of docking in Brisbane as planned.

Queensland Health Minister Steven Miles said all 19 crew aboard the ship have now been tested.

Miles said the New Zealand government has asked for Queensland to do genomic sequencing on the two crew members who have the virus to "confirm the information that they have to hand and to provide some further information".

New Zealand's ministry says this work will help determine if the infected crew members were the likely source of the port worker's infection.

The two new cases will not be counted in Queensland's tally until they arrive on the mainland.

"There's a meeting under way to determine if they will be evacuated to the mainland, and what hospital that will be," Miles said.

There are four active cases of the coronavirus in Queensland.

In New Zealand, the engineer is one of three infected New Zealanders connected with the ship.

The other two cases were announced on 21 October. One was a close work contact of the engineer and was already in quarantine as a precaution, having also been on the Sofrana Surville on 12 October.

The third case was described as a casual contact of the first case, but Director-General of Health Dr Ashley Bloomfield said they could have been infected by either the engineer or the engineer's colleague, and investigations were continuing.

This third case was the person who went to a pub at Greenhithe before knowing they were infectious.