Health Minister Chris Hipkins says the infected person who went to a North Shore pub on Friday was exposed to Covid-19 on the same day, making the risk of infection to patrons low.

People who visited The Malt pub in Greenhithe on 16 October are being asked to self-isolate and get tested after it was confirmed an unknowingly infected person went there.

The person became infectious after coming into casual contact with a port worker who tested positive for Covid-19 at the weekend.

Auckland Regional Public Health Service (ARPHS) issued the notice as it tries to establish the person's movements while they were infectious.

The person was in the Malt pub from 7.30pm until 10pm. They are one of the cases announced by the Ministry of Health on Wednesday.

An ARPHS spokesperson said a few close contacts in the pub had already been identified and were being contacted. The pub's staff are also getting tested and three are self-isolating.

Most people in the pub would be considered casual contacts, but are urged to get tested as soon as possible.

Chris Hipkins told Morning Report the Ministry of Health is contacting people who were at the pub on Friday night as quickly as possible through the Covid Tracer app.

"That is working exactly as we'd anticipate," he said.

"In terms of alert levels, we're not seeing information at this point that would suggest a change to alert levels, but obviously Covid-19 is a tricky virus, it can spread very quickly so we are monitoring it very, very closely."

The whole country is currently at alert level 1.

Hipkins said the risk of transmission at the Malt was low.

"Case C (the case who went to The Malt pub) is most likely to have been exposed on Friday the 16th (October), Friday the 16th is also the day they went to the pub ... so that's a fairly tight timeframe, they became symptomatic and got tested over the weekend, so look it's still quite a tight timeframe we're talking about here.

"That would suggest a reasonably low risk (of transmission within the pub) but not no risk, there is no such thing as no risk here."

Hipkins said push notification was sent to all the patrons who were at The Malt on Friday night and those who were dining with the person are being contacted by the ministry. 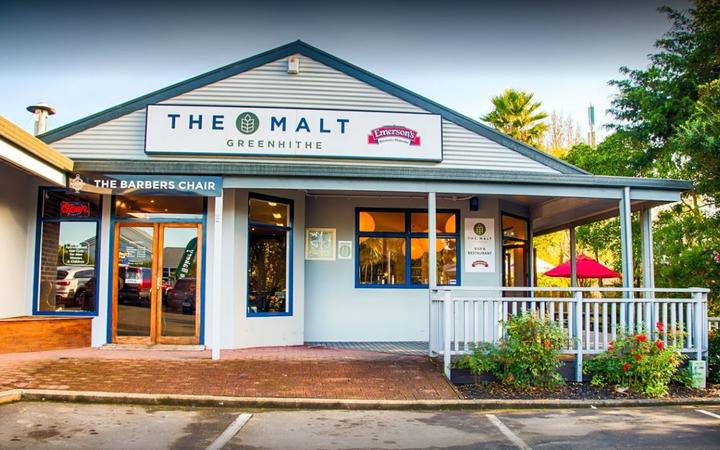 Hipkins said a pop-up testing centre will be set up in Greenhithe today for members of the community to get tested.

He also reiterated the need for people to use the QR code scanner as usage has dropped since moving back to alert level 1.

Up to 80 people at The Malt on Friday - owner

The Malt owner Kevin McVicar told Morning Report about 60 to 80 people were at The Malt throughout Friday night.

He said he was first alerted to the situation when a Ministry of Health employee came to The Malt on Wednesday evening as his phones hadn't been working.

"I was sceptical (at first) because it happened quite quickly and because the news was always reporting that we've had no cases for a while," he said.

McVicar said he messaged all his staff last night to get tested today - eight were working on Friday night.

"I went to get tested last night but the wait was ridiculous and they said 'you're not going to get results quicker by doing it tonight so you might as well do it tomorrow', so I'll be heading into Greenhithe today to get it done."

He said he was told it would be a three-hour wait for a test last night.

McVicar said he was also concerned about Sunday 18 October when his pub was full for the All Blacks v Australia Bledisloe test.

The Ministry of Health hadn't told McVicar The Malt would require a clean, but he would do it anyway, he said.

McVicar said the ministry told him The Malt can reopen when the staff return negative tests but he does not expect that to happen soon.

RNZ reporter Sarah Robson was in the Greenhithe village on Thursday morning, she told Morning Report a 'closed until further notice' sign was up in the window of The Malt pub.

"Next door is Baked @ Greenhithe which is a little bakery, now interestingly they've basically reverted back to their level 3 set up this morning.

"So the staff inside are wearing masks, they've got a desk out the front where people can place their orders and put their payments through on the Eftpos machine without going into the store and without coming into contact with the staff there and there's a big bottle of hand sanitiser out there as well."

Robson said a few people coming to collect their morning coffees at the bakery were wearing masks, and so too were people riding the bus to work.

She added that the people she had spoken to were concerned about the infectious case at The Malt pub.

Auckland Regional Public Health Service asked people who were at pub from 7.30pm until 10pm, to self-isolate and get tested.

An additional community Covid-19 testing centre has been opened at at North Wainoni Park in Greenhithe.

Testing is also available across the city at the six permanent community testing centres, and at urgent care clinics and general practices.

Most people in the pub are considered casual contacts, but are being asked to get tested as soon as possible. They should stay at home in self-isolation until they receive a negative test result. Staff will also be asked to get tested.

For up-to-date information on testing locations in Auckland call Healthline on 0800 358 5453 or [www.arphs.health.nz/covid19test visit this website.]