A polling station in the middle of Wellington has been called the "friendliest place" you can cast a vote, with bilingual staff, kai and waiata. 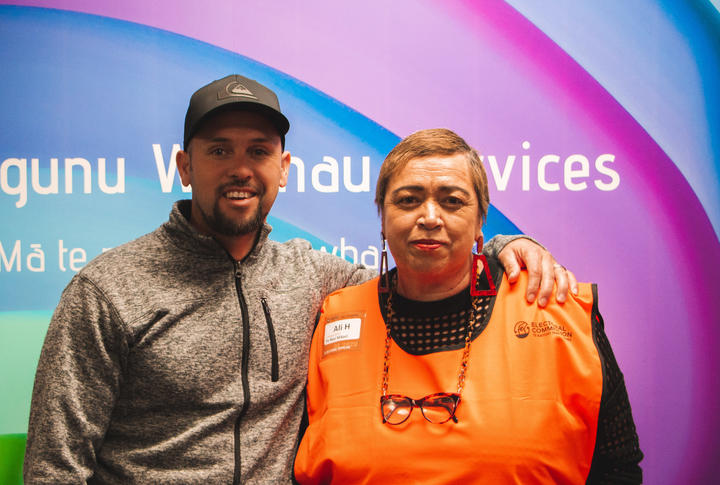 It is all part of an effort to get more whānau voting, after complaints from Māori about bad experiences at the last election.

People casting their ballot at the Kahungunu Whānau Services voting booth in central Wellington can go through the entire process in te reo Māori. For those who cannot speak the language, voting staff will explain the instructions in English.

The wahine driving the bilingual voting initiative in Poneke is Kahungunu Whānau Services chief executive Ali Hamlin-Paenga, who said they were running the voting place like a marae, with everyone encouraged to feel welcome.

"We're getting feedback about, 'this is one of the friendliest voting places we've been to', 'it's really nice to come in here and there's waiata in the background', there's even a little bit of a kai going on and kōrero Māori.

"Some of us don't kōrero Māori so well, but we're all making a conscious effort to use the reo and then we've got fluent speakers."

In the first week of running the booth, Hamlin-Paenga said about 700 people came through.

The local regional manager for the Electoral Commission, James Hamiora, said the wharekura led the initiative and "the enthusiasm has then spread throughout the community."

"So you're having tamariki and mokopuna from the kura that are going home and telling mum and dad, or nanny and koro, or uncle and aunty, the wider whānau about this exciting initiative that's happening at the kura," Hamiora said.

"There was a group from the Waahi Pā, up to about 40 people who turned up en mass at te kura to cast their votes, as they were leaving they said, 'well, we're going to put a post up on Facebook to challenge the other marae to do the same."

Hamiora said the Electoral Commission was keen to have the model "duplicated across other parts of the motu", but they would only do that if kura, iwi or other Māori organisations approached them first.

The commission said for this election, it has increased the number of te reo speakers across all booths, and provided Māori pronunciation training, after complaints about Māori names being mangled by voting staff.

However, not all Electoral Commission staff had been trained in Māori pronunciation - and they needed to be, Hamlin-Paenga said.

"This is what's causing a lot of uncomfortableness for our people, when you come in and you get called 'Arrow-ha'," she said.

The Electoral Commission's Graeme Astle said it was not considered necessary to make the training compulsory.

"We encouraged everybody to use the module, but we also acknowledged that a number of our staff are already very proficient speakers of te reo, so I suppose it was about trying to get that balance right, but this is a matter that would be worth considering for 2023," he said.