Thirty thousand tickets have been sold in just over a week for the All Blacks game against Australia at Wellington's Sky Stadium this Sunday. 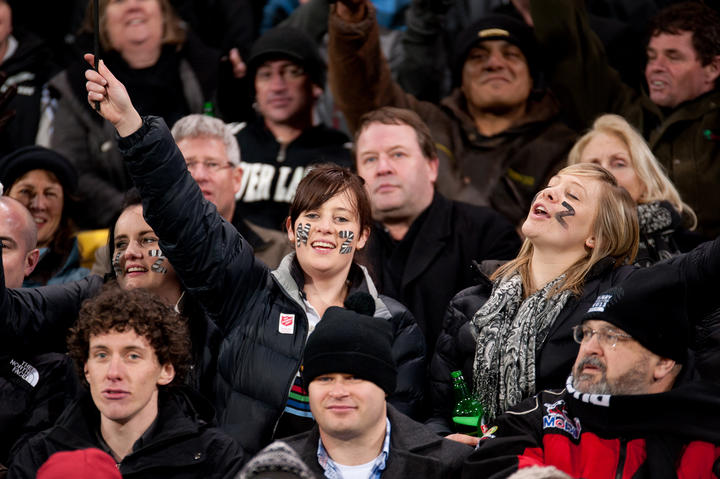 All Blacks fans celebrate after an All Blacks try against South Africa at the then-Westpac Stadium, in 2011. Photo: Photosport/ Mark Tantrum

The match will be New Zealand's first international sporting fixture on home soil with a full crowd since the pandemic started.

But attendees are being told by Dr Ashley Bloomfield to pass on their tickets if they've got any Covid-19 symptoms.

"If you've got symptoms, I know it might be a pain, but give your ticket away to the Bledisloe Cup match. Let's just not give away these gains. Just be sensible."

Not that he's the person to give your ticket to...

"I don't need it, because I've managed to secure a not very good seat, but it is a seat," he said. "...I will be backing the All Blacks, in case there's any uncertainty."

With such an asking price, will attendees heed Dr Bloomfield's message?

"Totally fine, yep I fully agree with that," said Caroline. "Touch wood I don't have any symptoms between now and the weekend, but yep totally fine."

"I think for everybody that's going, I think that would be a wise idea to be honest," said Grant Wheeler.

"I think with the lack of transmission in the community, it's okay to have [the match] going. I certainly wouldn't want people going if they've got a cold and coughing over people.

Lou Ryan said: "I wouldn't want to go and potentially spread the virus.

"Especially when I consider my father-in-law is elderly, so more susceptible. So I would definitely not be looking to go to spread it to him and anyone else."

The fans said that with the entire country now at alert level 1, and no community transmission going about, they're feeling comfortable attending.

The stadium's chief executive, Shane Harmon, is giving assurances they've got all the appropriate plans in place.

"We as a venue, we have signed up to the government's voluntary Code for events, which really is about showing the event sector's support for New Zealand efforts in key areas of public health, so most particularly around contact tracing.

"We'll have QR codes all around the venue at all aisles, and we'll have hand sanitiser available at all our catering outlets."

He said several hundred QR codes have been stationed across the stadium, so everyone can register their attendance.

On top of that, in the event there is an outbreak, people's tickets will be another tool for contact tracing.

"One of the big concerns of having a lot of people in one place is if you have QR codes, they basically just say that you've been at the stadium.

"For contact tracing that's probably not going to be all that useful. And so bluetooth technology might be helpful in localising where you've been a little bit more, so it can provide that granularity."

30,000 tickets have been sold - quite impressive considering they've only been on general sale since last Thursday. Under normal circumstances, tickets go on sale five to six months before the day.

Despite that, the President of Hospitality New Zealand, Jeremy Smith says it's not quite business as usual for the accommodation sector.

"The bookings are good, they're not great. There are still a few rooms available in Wellington, which for a test match is a little unusual. But maybe [down to] end of school holidays, being a Sunday? We're not there 100 percent, but we're very grateful."

He said he normally doesn't miss a match, and would be heading to the game if he hadn't already booked a weekend up in Taupō.