The spell of wintery weather looks to be lingering over most of the South Island today but temperatures are expected to rise dramatically later this week. 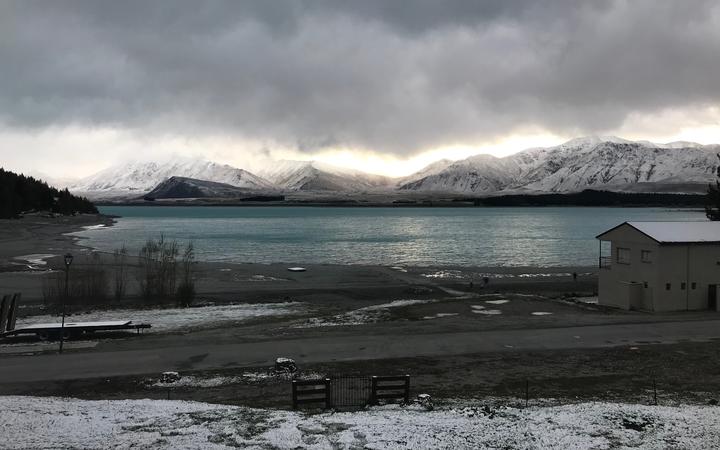 Lake Tekapo earlier this week when a snow storm was passing through. Photo: Supplied / Glyn Walters

In the North Island even Masterton dipped to -2.3C.

Southland and Fiordland were the only regions expected to have snow this morning, down to 300m, according to MetService. While morning frost was forecast for Horowhenua to Wellington, Nelson, Marlborough and Canterbury.

Chatham Islands was set to get doused with showers and snow.

MetService's wind and snow warnings and watches have now been lifted for the country.

Freezing temps delivered across the South Island last night. Lucky some ☀ is due to warm up the day!https://t.co/WmuNA9DXoJ ^Tahlia pic.twitter.com/wkazTISQhz

Some in highways in Otago and Southland were partially shut overnight due to snowfall. State Highway 87 between Middlemarch and Outram remains closed.

The road to Milford Sound has reopened after it was closed due to heavy snow on Saturday morning.

The Waka Kotahi Milford Road Alliance says the avalanche hazard is low and the conditions should be fine throughout the day.

In the Clutha District, contractors are assessing roads after yesterday's heavy dump of spring snow.

The Clutha District Council says the snow has started to melt in the low lying areas, and it is urging people to take care as cold temperatures could mean ice patches on some roads.

Four graders are working on the higher altitude roads while others check how much snow remains around the district.

The council said it was expecting most roads would be clear by the end of the day.

Niwa meteorologist Ben Noll told Morning Report the chilly weather this week had dropped temperatures at Mount Potts to -13C at one point.

But these temperatures were still three to four degrees shy of previous September records, he said.

"Often we have to go back into say the 1940s or '50s to see those colder figures and that speaks to what's going on in the background with the climate change," Noll said.

"Under a warming world, we can still get these cold extremes but they will happen less frequently in terms of probability perspective."

It is expected to be another cold night today with frost, as current front passes east and high pressure moves in.

With those conditions easing up to the weekend, Niwa says 25-plus degrees Celsius will be possible in some places from this weekend into early next week as air mass changes from Antarctic to Australian.

Our air mass source will soon change from Antarctic to Australian

After temperatures as cold as -10 degrees tonight, 25+ degrees will be possible in some places from this weekend into early next week! pic.twitter.com/Io7e2VW1QS

"As we work our way into early next week that [warming trend] will continue, mainly in the South Island, and eastern parts of the North Island," Noll said.

Northwesterlies are set to rip through Wellington on Friday and that will continue through weekend, Noll said.

Meanwhile, drought-hit Auckland is tracking to have its second or third driest September on record, Noll said, and not a lot of rain was on the cards for October either. 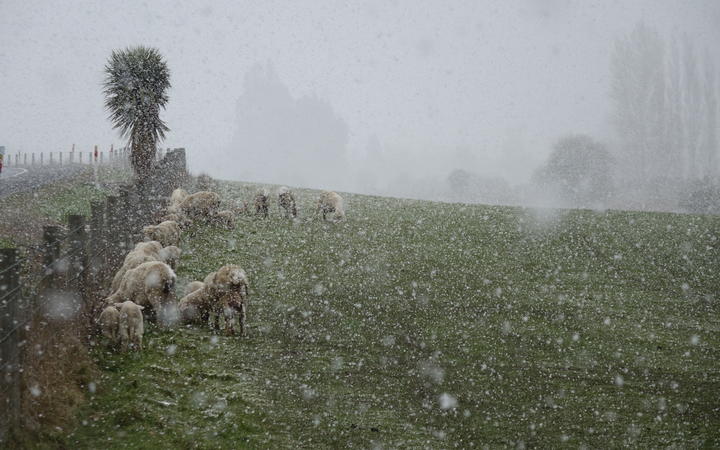 Livestock holding out on a farm near Waihola, Otago as the frost kicks in during a wintry blast on 29 September, 2020. Photo: RNZ / Tess Brunton

He said there had been another 4-5cm of snowfall overnight, averaging about 20cm overall for the bottom end of the valley and about 1m for the top.

One of the concerns for farmers in this wild weather has been for their lambs, since it has been lambing season, and calves.

"The cattle all got effectively fed about four times what they'd normally be fed in supplements," Kane said.

The majority of the calves under his wing were born three weeks or months ago and most were also indoors, he said.

"There has been a lot of snow drifting into sheds, which is pretty unusual as well, but at least they've got a lot of shelter, milk is still heated and warmed for those calves. They're probably faring the best out of everything."

He believes the windchill would have killed thousands of lambs just in his catchment, with 1000 costing $1 million.

Although, the full extent of stock losses would not be known until snow thaws on the ground, he said.

"It's at a depth where we can't see any loss even if there is, it'd be hard to believe there's nothing. For the area, it'll be in the thousands."

Going out to inspect losses now would cause more harm than good, he said.

"Especially if you get a storm come through with very short notice period to see it coming, if you're in the middle of a mob and you have disturbed something, the chances of actually finding the correct mother for the lambs is an absolute nightmare."

John Gardyne, who farms at Waikaka, north of Gore, Southland, told Morning Report he was also nearing the end of his lambing cycle but those on the hills who had just started would be hard-hit.

"We've definitely had lamb losses, bit higher than we should have, but I mean that's part of farming. The snow's been here throughout about 48 hours so we're hoping it'll clear in the day on low country."

Nigel Woodhead, who is a sheep and beef farmer in Milton, Otago, told Morning Report they were a bit more fortunate with most the snow on paddocks gone and livestock deaths not looking too bad.

"I had a look around last night on some easier paddocks that I can get to ... there was the odd dead lamb around the place but not big numbers.

"We're in a very fortunate position that we're coming to the end of our main lot of lambing so the number of newborns in last 24 hours won't be not huge ... the lambs that I did see had perished were only brand newborns."