Napier City Council has been granted an extra month to fix a pipe seeping sewage into the ocean. 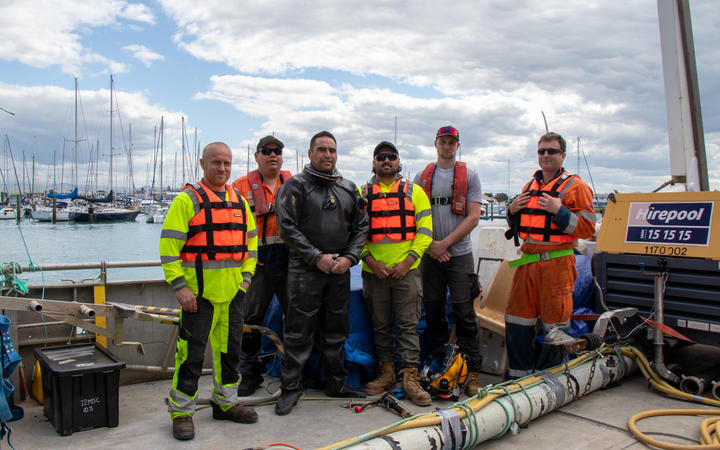 Workers get ready to fix a sewage pipe in Nelson which is leaking into the ocean. Photo: Supplied / Napier City Council

The Hawke's Bay Regional Council says Napier could face prosecution if it doesn't contain the risk.

The deadline was 30 October but it has been extended to 30 November.

"The extension to the date was deemed necessary to allow the repairs to be undertaken effectively and safely," Blunden said in a statement.

That was because of the Covid-19 restrictions in Auckland, which meant contractors and equipment couldn't come on time.

Napier Mayor Kirsten Wise told RNZ it had to be repaired safely otherwise there could be more damage.

She said if it was not done carefully, the leak could become worse and there could be a higher environmental risk.

A seven-strong crew from New Zealand Diving & Salvage Ltd have just started work on the repair.

The project was weather dependent and expected to take a month, a Napier City Council statement said.

The first task will be to carry out an inspection of the diffusers at the end of the 1.5km-long outfall, before work begins on the first of the leaks.

A leak in the outfall was discovered in 2018, 700m offshore at a point where the pipe was joined, followed by another closer to shore in April 2020.

A masterplan has been developed, to help determine requirements for the full replacement of the outfall.

This replacement could cost between $20 million to 40 million and a detailed investigation needs to be carried out on both to make sure the preferred option is the right one.

This information was likely to be available by the end of the financial year as the masterplan targets are worked through.

Further information about the outfall replacement is expected to be included in the next Long Term Plan, in 2021.

Napier's council has set aside $2m for the repair and another $2m to create storage for wastewater at the treatment plant to allow for future shutdowns for maintenance and repairs, and aid management of stormwater events.

The costs for the repair and the new storage is funded from reserves so there would be no effect on rates.

The 1.54km long outfall pipe has been in place since 1972. The first leak occurred at the point where the two sections of pipe were joined. The fibreglass joint was installed at this point in 1984.

The council had spent close to a million dollars on proactive maintenance of the outfall in the past two financial years.