A temporary fix to the Auckland Harbour Bridge damage has been chosen, and two more central lanes are expected to reopen later this week.

The bridge was damaged last week after a freak gust of wind blew a truck into a structurally important load-bearing strut. Today was the first business day since four lanes - two in each direction - closed.

The solution is currently being peer reviewed, and construction work to assemble it will begin overnight from 22 September, Prime Minister Jacinda Ardern said at a media conference this afternoon.

Providing that the independent peer review goes well, NZTA would shut the southbound lanes of the bridge from about 9pm on Tuesday and until 5am the next day, with installation of a new piece expected to take up to two nights.

However, NZTA says it won't know the timeframe for certain until the teams get up there and understand the challenges of the repair work.

Northbound traffic will still have two lanes open and a detour route around the western ring route will be put in for southbound traffic.

And once the temporary fix is in place, rigourous testing will still have to be done before vehicles are allowed back onto two of the four lanes that are closed on the centre span - one in each direction.

"This is a complex undertaking and has never been done before, so the team must do extensive testing on the bridge before opening it up to live traffic," Ardern said.

"There will be real life testing with heavy vehicles to ensure it performs to the design specifications and requirements."

A permanent solution is still weeks away.

Waka Kotahi Transport Agency engineers were making good progress, but the process was very detailed, and must be done right, Ardern said. 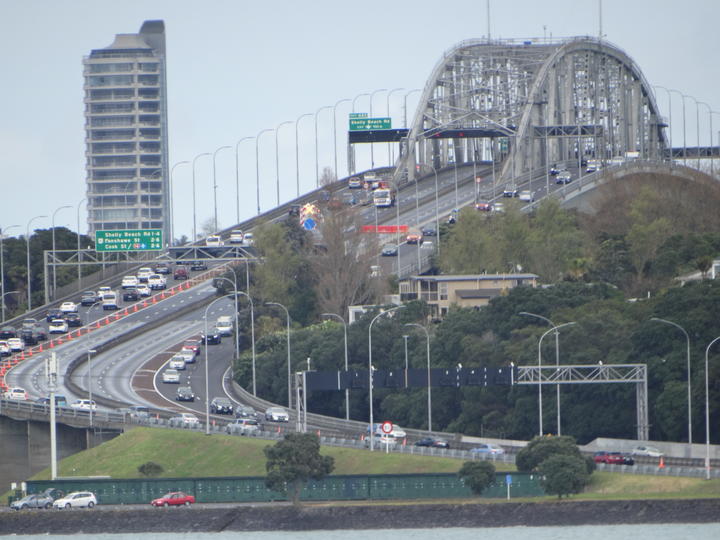 In the meantime, the Curran Street on-ramp will be closed until the bridge was fully operational, according to Waka Kotahi.

The agency was also setting up a bus priority lane for those leaving the city on public transport.

"The buses will be able to get past the queues on the bridge and once you get on the bridge, the traffic flows quite well," he said.

Work from home or use Western route - Waka Kotahi

Waka Kotahi's advice for those intending to travel in peak hours remains the same; either work from home if you can, otherwise use the Western ring route.

Among them was North Shore resident Grant Marshall, who tried to catch a bus outside his home in Glenfield shortly after 7am.

He abandoned it half an hour later after inching forward just 2km.

"I got out of the bus and just walked home. I managed to kind of really power walk home in about 20 minutes, log in to my work computer remotely and just start working. Had I not been able to do that, I would probably still be on the bus now, an hour and a half later," he said.

Marshall estimated it would have taken at least two hours to reach his work in Newmarket, despite Auckland Transport advising him last night the journey would take only an extra few minutes by bus.

The Green Party is calling for a bus lane right across the bridge.

Bill McKay from the University of Auckland School of Architecture and Planning agrees it could be instated permanently, to avoid future problems with bridge bottlenecks.

"Public transport needs to have dedicated lanes to make it work effectively, so that people will get on it. People in Auckland are just too used to buses and trains grinding to a halt."

By 8.15am, the Silverdale to city route was taking about an hour, while the alternative via SH18/Sh16 (western ring route) was taking an hour and a quarter compared to half an hour.

At one point the alternative route was taking two hours. However traffic across the bridge northward from the city was taking about 20 minutes.

Auckland Transport said there were 14,000 extra seats on buses and ferries this week, and off-peak fares were discounted by 30 percent. 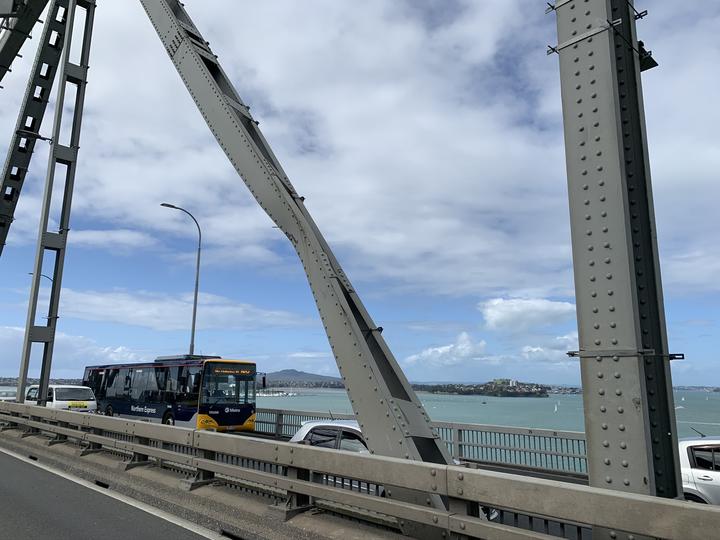 In a conference this afternoon, Waka Kotahi general manager for transport services Brett Gliddon said they were also in the design and sourcing materials phase for a permanent solution.

"The challenge with the permanent solution is about redistributing the stresses back around onto the new strut around from the bridge and that involves jacking the bridge, pushing the bridge to get tension back into the strut, so there's quite a lot design work that has to go into that," Gliddon said.

"We now have a design for a temporary solution which will involve cutting and unbolting the damaged strut halfway up and installing new steel, attaching that to the bridge at the base ... we are currently in the process of constructing that piece of steel.

"Once we have done that we will also need to do some real life tests ... and provided it passes all those tests, we are hopeful we will be able to open an additional lane in each direction for all traffic, including heavy vehicles on the main structure of the bridge."

He said if there was a major emergency or 'worst case scenario' overnight Tuesday then NZTA could halt the repair work to allow traffic over the bridge.

"We're not going to open it unless it's safe to do so and that we're 100 percent confident it's going to work."

He said there was plenty of resources available to begin the temporary solution.

"I can assure you we are chucking a huge amount of resource at this, we've got a lot of engineers that have worked all through the weekend, we've got construction guys preparing the methodology for the construction of it, we've got fabricators ready lined up to build it."