With the Auckland Harbour Bridge operating at half capacity, and morning traffic building up on the approach to the bridge, thousands of Aucklanders endured a slower than ususal journey into work. 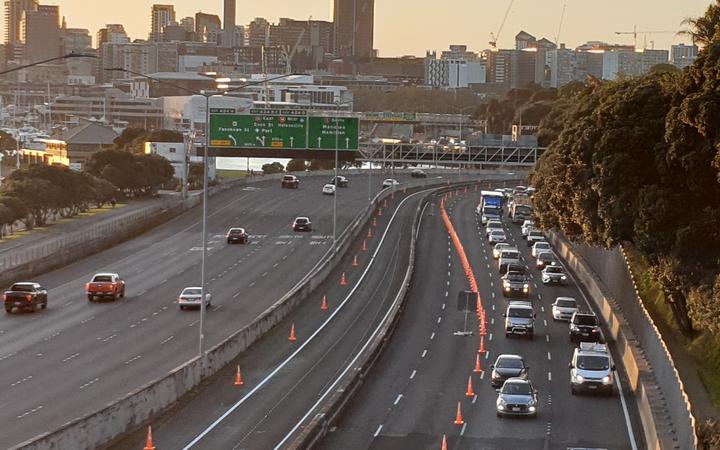 Four of the bridge's eight lanes could be closed for weeks, after a freak gust of wind on Friday blew a truck into a structurally important load-bearing strut. Today is the first business day since the lanes closed.

A crash near the Brigham Creek Road on-ramp to SH18 also created delays for traffic northbound on the western ring route, was moving slowly at 8.40am.

Traffic monitoring maps showed commuter delays for all routes leading to the bridge, from Rosedale in the north to Greenlane in the south. 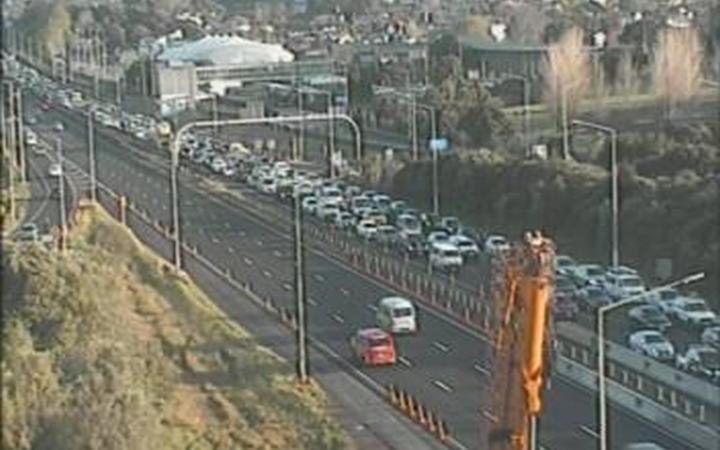 Commuters were being asked to work from home if they could, catch public transport or travel outside peak times, and traffic volumes began to ramp up about an hour earlier than on a typical weekday.

North Shore commuter Grant Marshall said he initially caught a bus from Glenfield shortly after 7am, but abandoned it after inching forward only two kilometres in half an hour.

He said live digital updates had showed he wouldn't have reached Newmarket until about 10am, but Auckland Transport had advised him last night the journey would take only an extra few minutes by bus.

Other drivers were also doing u-turns in the congestion.

"I got out of the bus and just walked home because it was quicker to go home and work from home," Marshall said.

Auckland mayor Phil Goff said despite the fact traffic disruption is expected for up to five weeks, it was hard to create a solution that could prevent similar damage again.

"It was a freak wind gust ... that did the damage, I don't think you can build around that. The ultimate answer is probably that the next harbour crossing is likely to be a tunnel, not a bridge."

Public transport capacity is increased today, and he is encouraging people to use it to reduce the congestion, or work from home if possible.

Auckland Transport says there are 14,000 extra seats on buses and ferries this week. Off-peak fares are discounted by 30 percent.

"It virtually adds an hour to a trip over to the North Shore, so that adds costs to every transport-related business. It's an absolute balls-up... the whole of New Zealand's transport system is really really fragile. We've been let down continually."

The extra costs will be tough when added to the current economic strains many are experiencing because of the pandemic, and will have to be absorbed by the companies in the short term, he says.

Viv Beck is Chief Executive of the business association Heart of the City, and says central city businesses will also be copping another hit from the traffic problems.

"It's another blow, it's been a very tough year." The advice to work from home where possible made her "heart drop", as working from home has been the biggest drain on the inner city economy aside from tourism, large events and international students.

In the North Shore suburb of Northcote, city workers thought they might have to leave an hour earlier than normal, bypassing breakfast at home to get out the door quickly.

Normally 170,000 cars cross the bridge on a normal day, linking the northern part of the city to the centre and south.

With the original main structure out of action, the four "clip-on" lanes are the city's saving grace.

One woman, Roxanne, said she'll catch the bus this morning but hopes she doesn't have to brave traffic all week.

"I do have to be at work [today], I have meetings and things I need to be in there for, but the rest of the week I'm fine so working from home shouldn't be a real issue." 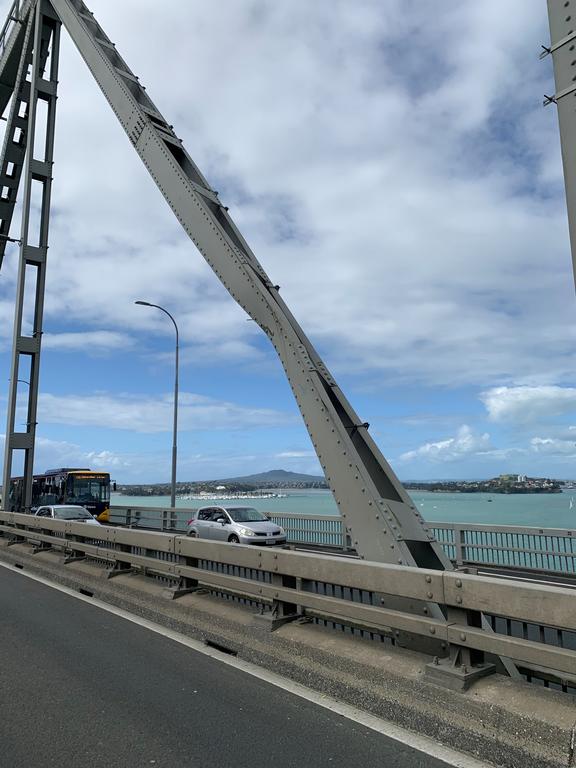 For some others they can't work at home and time is money.

"I have to work, I'm running a building site. I just think whoever's in charge of repairing it needs to pull finger. Why is no one working on the bridge [over the weekend]? It's ridiculous."

One man, Trevor, works in South Auckland. He might be able to work at home eventually but can't straight away.

"On the motorway with 200-odd other thousand people. It is what it is. Might even try knock off a couple Covid-pounds and go to the gym early, but I'm not too sure about that one."

With no real way of knowing how long the commute will take, some are leaving the house bright and early.

"I'm teaching in a classroom, so I have to be there ready for my kids early in the morning for an 8am start. Hopefully, I get there in time or the kids will be stuck without a teacher." 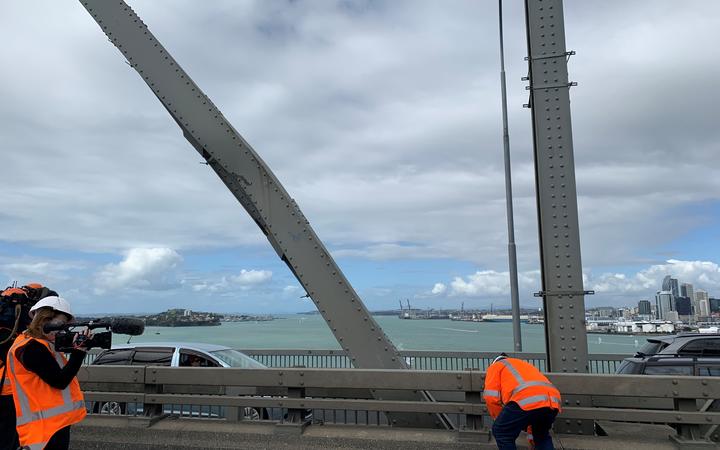 Engineers have been inspecting the damage but some want to know why repair work wasn't happening over the weekend. Photo: RNZ / Eli Orzessek

And some will probably be getting some envious looks, like Ralph.

"I'm on a motor scooter crossing the bridge every day so I'm actually not really affected by the traffic jam because I can go between cars."

Waka Kotahi NZ Transport Agency said even a temporary fix will be at least a week away, and won't necessarily allow more traffic to cross the bridge. 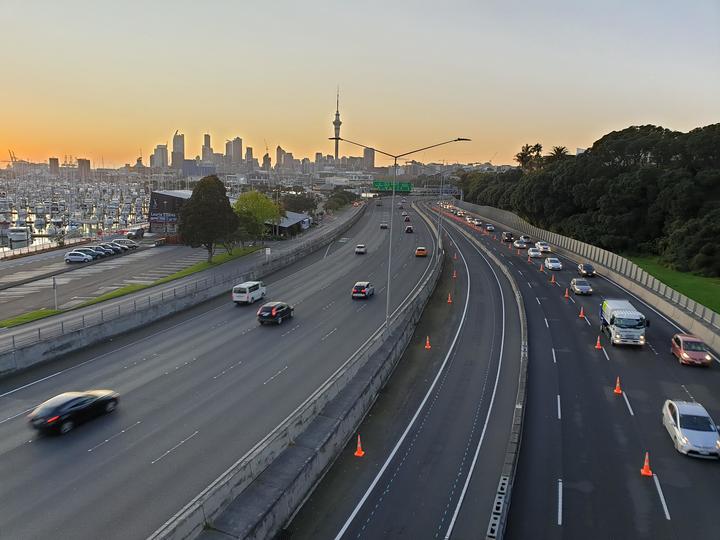 The Agency's manager of transport services Brett Gliddon said people travelling over the bridge won't see workers at the bridge yet, but lots was going on behind the scenes.

"We're designing the temporary fix right now, if we can get all the calculations and peer reviews for that completed today we'll be able to do the work for that this week in the evenings - we'll have to do it at night, because we'll need to use some space on the bridge - and hopefully have that in place in the week.

"We're removing half of the strut that's damaged and putting another piece of steel in to connect it back to the bridge. It will allow us to open up additional capacity on the main part of the bridge."

"It will not open up full capacity on the bridge, but it will give us additional lanes, which will take pressure off the system. It'll be at least a couple of lanes to begin with... we'll be able to confirm [how many lanes] once we complete the calculations as to how much load that strut's going to be able to take."

It was likely light vehicles would get more access quicker, as more caution was needed for heavy vehicles, he said.

"The permanent fix is going to take a little bit longer, we have to design a new strut, peer review that, get it manufactured, and then installed; so that's still going to be four to five weeks away.

The installation of it will be done probably over two or three days, you have to crane it into place, bolt it there, and the real trick is you have to put tension back into that member, which means you have to put big jacks on the bridge and jack and pressure up the member and bolt it up tight. So that will take a couple of nights worth of work.

"The real time... is the design of the strut, and we have to test it in our models to make sure that it works with the rest of the bridge and we don't create another issue, we then have to get that independently reviewed, because it's not something we can get wrong." 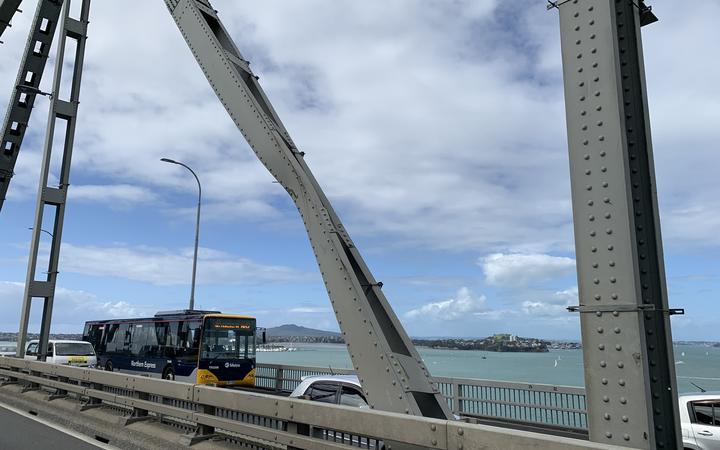 Thousands of extra seats are being made available on buses to try and help get Aucklanders to work. Photo: RNZ / Eli Orzessek