On a rainy winter day in Nelson, Banshee - a one-year-old Siberian husky - was out on a city hillside walkway, dotted with sheep. 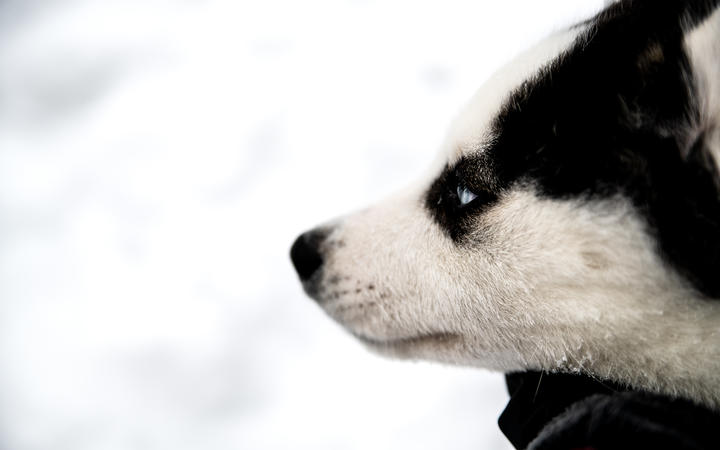 Dogs are meant to be on a leash in Stanley Whitehead Reserve, but Banshee's owner slipped in the wet, and lost the lead.

A person in a house below saw what happened, as environmental inspections manager Brian Wood told a council hearing today.

"It was a member of the public who observed Banshee's behaviour, and reported her as pulling at a sheep.

"She watched as Banshee used vigorous head-shaking, and attempted to try and drag the sheep, but could not move it so fed on it where it lay."

The farmer, Andrew Newton, recovered the dead Perindale sheep and said in his report to the council the sheep was on the bottom fence-line with its head through the netting. It had been badly mauled around the face, probably prior to it getting its head through the fence. Wool had been pulled from the body which was consistent with a continued dog attack.

Newton, who has managed sheep on council land for decades, told RNZ it was not the first time in his farming career he has had to deal with a dog mauling a sheep, and it did not get easier to deal with.

"We got called by dog control and had to just drag the ewe away, take it home and dispose of it.

"We knew it was a Husky and they are a notoriously susceptible breed to that - there are a few breeds susceptible to chasing sheep."

The council classified the dog as menacing, the lowest classification under the Dog Control Act, which required a dog to be muzzled in a public space.

There were currently 77 dogs on the council's books with this classification - a number that has remained similar each year over the past eight years.

Banshee's owner Ashley Shih, who declined to attend today's hearing remotely by Zoom or in person, tried unsuccessfully having the classification reversed.

The Nelson City Council has today deemed the dog must remain muzzled in public.

RNZ was not able to reach Shih, but in a report to the council she said:

"I have always been very responsible. She is never allowed off leash anywhere near sheep as I know dogs, given the chance, will chase prey.

"This incident was a wrong place, wrong time accident."

The council acknowledged the steps Shih had taken to remedy the incident, including payment of reparation for the loss of the sheep.

Shih said in her report to the council that Banshee had no history of aggression and that she was well cared for.

In her written objection to the dog's classification, she said Banshee had been booked in to one of the country's top dog psychologists.

But Brian Wood says the report from behavioural therapist Tammi Wharton did little to convince him that the right approach had been taken.

"She was not tested for her reaction to sheep when in the paddock with them alone, or not on a lead.

"The report simply outlines that they worked alongside stock, walking through them in paddocks, as well as free-running on adjacent paddocks.

"There's no indication Banshee was tested against sheep in a paddock."

Wharton declined to comment, respecting the wishes of her client.

Andrew Newton said dogs might chase sheep which run in fright, but he was not sure behavioural therapy was the right answer for some breeds.

"Quite a number of years ago, a little dog killed a lamb and they sent it to a dog psychologist in Wellington, and it came back and killed another one, so I can't say I've got complete confidence in the procedure."

He said dog owners had become a lot more responsible around stock in urban areas, but unless they took a firm stance with their dogs, they would keep killing.

"Dogs have got wonderful memories for things like that, when it comes to chasing or killing so you know, one day your back will be turned, the dog will have disappeared and you can pretty much guarantee it will be 'back on the job'."

City councillor Kate Fulton, who chaired today's hearing, said Banshee's owner had taken the matter seriously, but they were not convinced Banshee no longer posed a risk.

She said such events were traumatic for any dog owner, and for farmers.

"We're here to uphold safety in public spaces and make sure stock, animals and humans are safe.

"In this particular case, we believe the muzzling will work, and that's an acceptable outcome at this point in time."

Fulton said the door remained open for a change in Banshee's classification, pending a further application, but until then the dog must remain muzzled in public.