Roaming dogs are putting people at risk in Rotorua at a time Rotorua Lakes Council says there is no excuse for owners not knowing where their dogs are. 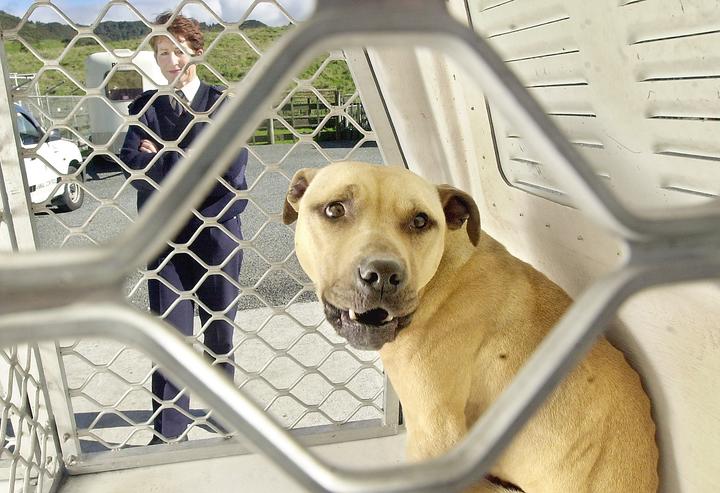 Animal control officer Christine Sanderson with a pitbull cross picked up wandering in Glenholme School's grounds. The district pound has been inundated with unwanted and roaming dogs over the last week. Photo: Rotorua Daily Post

There have been 15 reported dog attacks and 75 reported roaming dogs in the first two weeks of the Covid-19 level 4 lockdown, reflecting similar levels in the preceding two weeks, which was eight and 69 respectively.

Rotorua Lakes Council animal control team leader Dylan Wright said while the total call out numbers were not significantly higher than usual, it was disappointing there had not been a decrease during the lockdown.

"Overall we are actually seeing an increase in reported attacks," Wright said.

He said there should be no excuse for roaming dogs under the lockdown as people should be able to keep a "close eye" on their dogs' whereabouts.

"We've had to respond to a number of attacks in the past couple of weeks which have been a direct result of roaming dogs or dogs not being properly secured on properties."

Attacks were "incredibly stressful" on both dogs and owners and many were "completely avoidable".

Uncontrolled dogs led to unnecessary physical contact with people outside of their bubbles and Wright said it was "disappointing" dog owners did not appear to be taking extra precautions.

"My team is working hard to continue their work while also adhering to alert level 4 protocols to keep themselves, their families, and the community safe, but every time they have to respond to an attack, or return a roaming dog to an owner, the risk level for everyone increases.

"It is a dog owner's legal obligation to keep dogs properly secured on a property and under with control."

Rotorua Lakes Council took to Facebook last week to beg dog owners to control their furry friends during the lockdown.

"We've asked before and we'll ask again, please ensure your dogs are secure on your property," a council social media post said.

"The excuse that 'people are in lockdown, not dogs' is just unacceptable."

The council was taking a "zero tolerance" approach to roaming dogs.

The post warned dogs found roaming would mean owners would be issued with an infringement notice.

Unregistered dogs would mean an additional infringement, and if the council had to deal with the dog roaming before, it would be impounded.