Some mosque shooting victims want Australia to pick up the bill for incarcerating the Christchurch mosque terrorist. 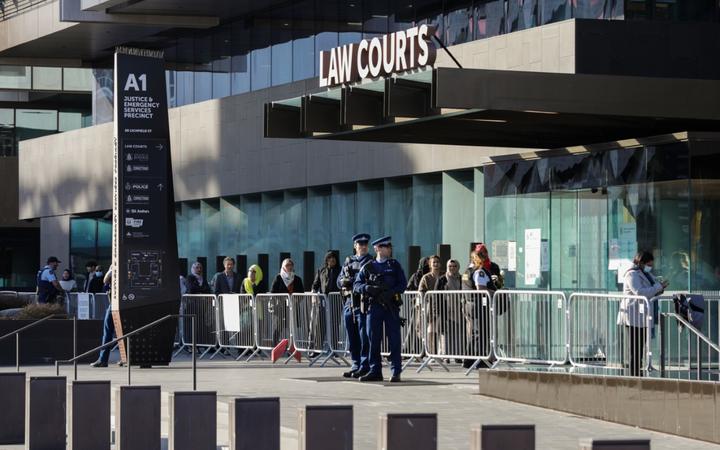 Police standing guard outside the High Court in Christchurch as Brenton Tarrant was being sentenced. Photo: RNZ / Nate McKinnon

This comes as Brenton Tarrant, 29, who was last week sentenced to life in prison with no parole, is classed as a terrorist entity alongside the likes of Isis and the Real IRA.

The Australian citizen, who moved to this country three years ago with the sole purpose of carrying out the attack in which 51 people died, is being held in isolation at Auckland's maximum security prison.

Prime Minister Jacinda Ardern said she would first talk to the victims and their families before deciding whether he should be sent back to his home country or continue to be held here at a cost of $5000 a day.

John Milne who lost his 14-year-old son Sayyad Milne, said it was important he stayed here.

"We can't let him go. We've lost control of what happens to him. You see governments change their mind. They change. We don't know what government we're going to get this time around."

But he did not think this country should be forced to pick up the tab, which based on the $3.6 million budgeted for his first two years of incarceration, could run in to tens of millions of dollars.

"I think Australia needs to pay the total cost for what we've spent already, they need to pay that plus ongoing. They need to cough up big time. There's a big bill out there for this now, he's Australian, not a Kiwi, we shouldn't have to pay for any of it."

Abdul Aziz, who chased the gunman from the Linwood mosque, said he would rather see the millions being spent on the gunman, re-directed towards education programmes aimed at stamping out racism.

"Make sure we have some sort of classes or some things you know for the next generation. Make sure [that with] bullying or this racism and things we try to get rid of it you know [with] more education. That money you know we can do a lot better things than spending it on that coward."

But before he was sent back to his home country, Abdul Aziz would want a cast iron guarantee the terrorist would not ever be let out of prison.

"There shouldn't be any changes when he goes there. [They should] follow the same punishment he got from New Zealand."

The general secretary of the Muslim Association of Canterbury and one of those injured in the Al Noor Mosque, Feroze Ditta, said he should remain in New Zealand.

"He committed the crime in New Zealand. He got tried by the New Zealand courts, is [serving a] sentence in a New Zealand prison. That's where he should remain. If for some reason there is a need for him to go across to Australia [it depends on the sentence and] whether the Australians would honour that."

As a terrorist entity on a list with 19 terror organisations, the gunman could have his assets seized and steps could be taken against anybody wanting to support him or his white nationalist cause.

Feroze Ditta said this was a wise move.

"It puts others on notice as well. Perhaps whoever was supporting him, chances are that if they're caught or found to be supporting him financially, they could face the law as well."

A spokesperson for the prime minister said as yet there were no timeframes for when victims would be consulted on where the terrorist should serve his sentence.

Her Australian counterpart, Scott Morrison, said he was open to discussing the matter further.