The man who carried out the mosque attacks in Christchurch on 15 March 2019 has been sentenced to life in prison without the possibility of ever leaving jail. 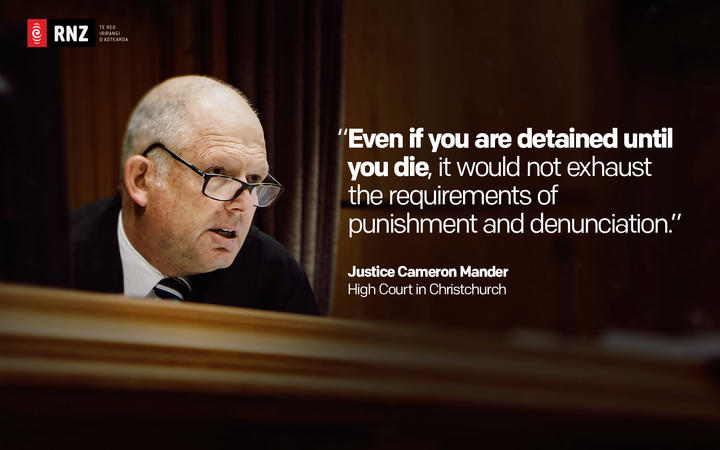 Australian Brenton Tarrant, 29, had earlier admitted 51 charges of murder, 40 of attempted murder and one charge of terrorism.

Justice Cameron Mander this afternoon imposed the sentence - the harshest available to the court.

It marks the first time a convicted person has ever been imprisoned with no possibility of parole.

He also shot and injured 40 more in an attempt to murder them.

Tarrant was also sentenced to life imprisonment on one count of engaging in a terrorist act.

It marked the first time anyone was sentenced for offending under the Terrorism Suppression Act.

The terrorist did not oppose being jailed without the possibility of parole.

A packed public gallery and seven other courtrooms filled with victims, their families and supporters watched as the sentence was handed down.

They shared hugs and tears after court was adjourned.

Before handing down the sentence, Justice Cameron Mander read through the names of the murder victims, relaying details of their lives and the shattered families they left behind to the terrorist.

He then detailed the injuries of the 40 survivors of the attack.

The survivors had to endure long-lasting and deep-seated trauma as a result of the attack, Justice Mander said.

"The mosques were places of sanctuary, this country too ... was also seen as a place of refuge and safety by many of those you targeted," he said.

"I have no doubt you came to New Zealand and targeted its Muslim community for that very reason."

The attack was inhuman, the judge said.

"You showed no mercy.

"You ignored the pleas of the wounded to be spared. You advanced on them, stood over them and shot them."

The terrorist was motivated by a "base hatred of people perceived to be different from yourself".

"It is not apparent that you are genuinely remorseful for your actions apart from the circumstances in which you now find yourself," Justice Mander said.

The terrorist's hateful ideology was anathema to the values of New Zealand's society.

"Even if you are detained until you die, it would not exhaust the requirements of punishment and denunciation." 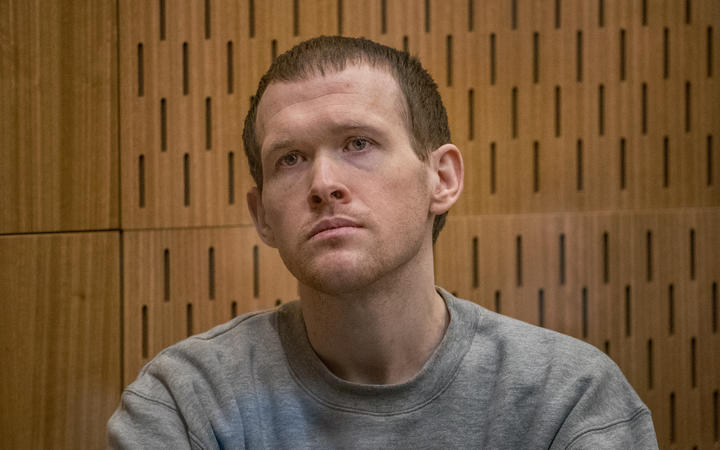 Brenton Tarrant has listened to three days of statements from those most directly impacted by his terrorist attacks. Photo: Stuff / Pool

'A painful and harrowing mark in NZ's history'

"He has caused permanent and immeasurable suffering and harm to the victims' families, the Muslim community and to the rest of New Zealand," Zarifeh said.

He described the Christchurch terror attack as a "painful and harrowing mark in New Zealand's history".

The attack was premeditated, extremely violent, brutal, cruel and callous.

"The offender demonstrated calculated and militaristic determination in carrying out this plan," Zarifeh said.

"The significance of the location of the offending - two places of worship - to the victims cannot be overlooked.

"The calculated sadism and depravity exhibited by the offender cannot be overstated." 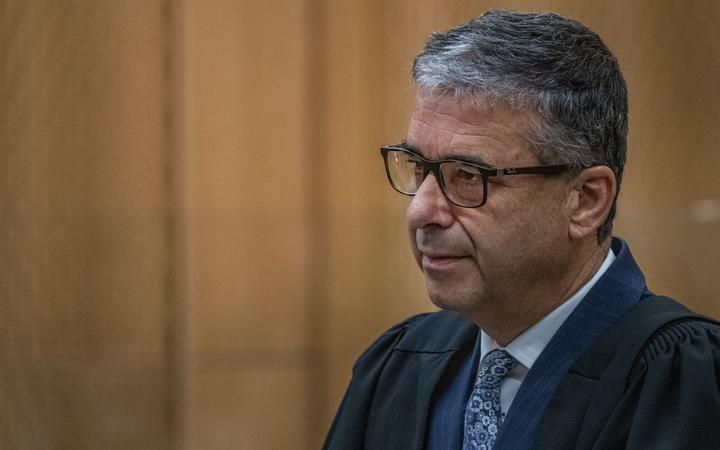 His offending had caused real fear of similar terror attacks in the future and imposing life imprisonment without parole was a necessary deterrent.

Tarrant's actions were designed to "inflict extreme fear, horror and loss to the Muslim and non-Caucasian population of Christchurch".

Zarifeh detailed a report from April following the terrorist speaking to Corrections.

"The offender's statements are often paradoxical in the report. He is noted by the report writer as showing no remorse, talking about his victims in the abstract, showing no concern for the families of those affected and speaking in a matter of fact manner about the offending," Zarifeh said.

Terrorist admits he had a "poisoned emotional state'

"However, the offender himself goes onto describe the offending as unnecessary, abhorrent and irrational, and that nothing good came from the offending.

"The offender told the report writer the political and social views he had to justify the offending were not real. He said he had a poisoned emotional state and was terribly unhappy. He said he felt ostracised by society and wanted to damage society as an act of revenge.

"Yet at the same time the offender described the offending as definitely an act of terrorism and he goes onto state that he wasn't racist or xenophobic and didn't target his victims based on their ethnicity.

"He said he targeted a religion but then claimed he had no issue with Islam.

"Similar changes in view and disavowing his previously held ideology have also been expressed to a psychologist and psychiatrist recently. However, the reliability of this in their view remains questionable." 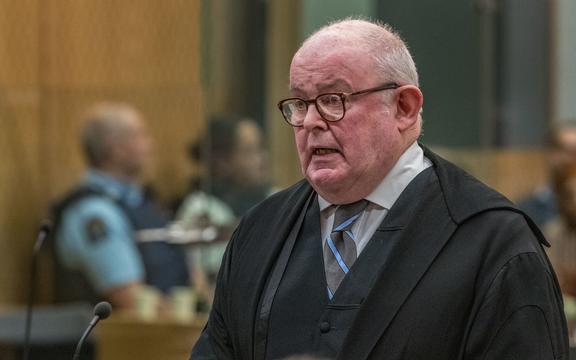 Standby counsel, Pip Hall QC, told the court he only had one submission to make to the court.

"Mr Tarrant does not oppose the application that he should be sentenced to life imprisonment without parole," Hall said.

The submission drew surprise from the public gallery, with one man saying "wow".

Justice Mander asked the terrorist directly if he wished to make any further submission.

"No. Thank you," Tarrant said from his seat in the dock.

When asked by the judge if he understood he had the right to make further submissions, he nodded in acknowledgement.

Kerry Cook, who was appointed as amicus curiae - a friend of the court, argued against life imprisonment.

He pointed to three factors which made such a sentence unjust - his guilty pleas, his potential for rehabilitation, and the constitutionality of life without parole.

"There must be some tangible credit for those pleas which have avoided a long and costly trial," Cook said.

"This court has seen through some comments by the prisoner there has been some recalibration in his ideology. His manifesto made it clear he would not be pleading guilty and yet he did. The views he held then are not the views he holds now, and there may be some further shift in future."

Lastly, Cook submitted imposing a sentence of life imprisonment without parole would breach New Zealand's Bill of Rights, specifically the right not to be subjected to torture or to cruel, degrading, or disproportionately severe treatment or punishment and the right not to be arbitrarily detained.

He called for a sentence of life imprisonment with a finite non-parole period. However, Tarrant would only leave jail once his risk to society had appropriately diminished.

"Life does mean life if an undue risk is still present," Cook said.

At the time of the terror attack, the terrorist had no prior criminal history.

Many of the victims who have been delivering their harrowing statements in court this week urged the judge to impose the sentence.

The possibility of such a sentence was one of the many complexities facing Justice Mander, the Law Society said earlier this week.

A steady stream of people started entering the High Court from the time the doors opened at 8am today.

White roses were handed out to the victims as they arrived in court. They were donated as a gesture of support from two women. 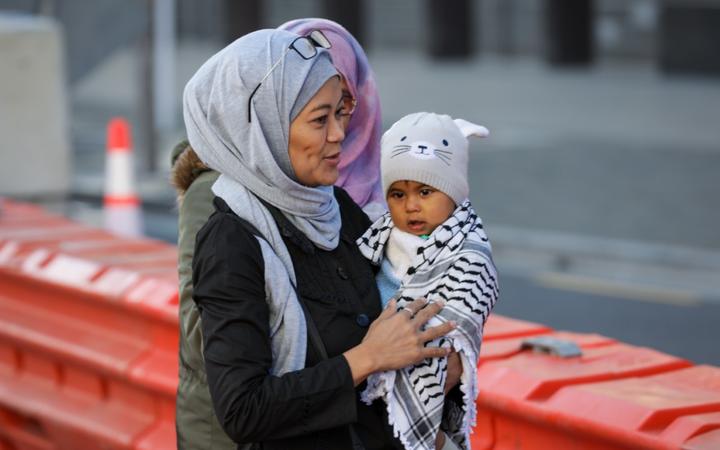 A woman and child arrive at court this morning. Photo: RNZ / Nate McKinnon

The last group of 93 victims read their impact statements yesterday afternoon - a marked increase on the 66 that were expected.

Community adviser and former Christchurch city councillor Raf Manji, who delivered some of the impact statements on behalf of the victims, said victims had been empowered by the way the hearing had been handled.

"In the end it has been a real healing process for a lot of people," Manji said.

The session today began with the Crown making its submissions before Pip Hall QC, who has been on standby, made submissions on behalf of Tarrant.

Late yesterday it emerged that Tarrant, who is representing himself, would not address the judge to offer any mitigating factors to explain the motivation behind his crimes.