Clarification: This story states that there were missing welds in the construction and that ungraded steel was used in key areas. RNZ accepts that these statements may have created a misleading impression of the workmanship and standards by the steel fabricator. RNZ acknowledges that the references in reports on the building referred to the need for extra welding if remedial work was done by adding bracing, but that the structure as erected had all the welds required by the original design and no welds were missing from the original structure. RNZ accepts that the steel used by the fabricator was in fact of the grade specified by the design engineer and met the contract specification. RNZ regrets any confusion or concern the original statements may have caused. 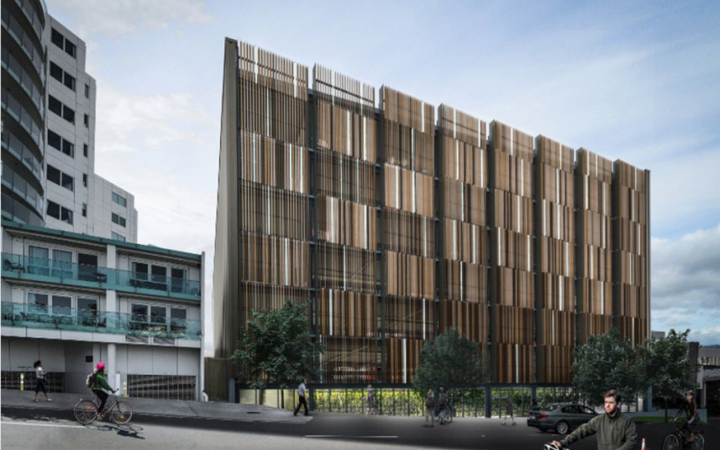 An artist's impression of the Harington Street transport hub in Tauranga. Photo: Supplied

The structural designer of the 550-carparking-space building said it blew the whistle on itself.

But the city council rejects that.

It has been advised the best option is to limit losses to about $27m all-up by pulling down the Harington Street transport hub block, versus $65m to rebuild it, according to documents newly released to RNZ.

"Someone might have had the attitude that 'she'll be right' and carried on," he said.

"We could have ended up with a completed building that would have worked and looked quite fine until there was a seismic event, and it could have been a catastrophic outcome."

The documents show a litany of floor, column and bracing weaknesses that have deterred the council - and contractors - from wanting to even try to remediate the building:

The carpark building, commissioned at $29m to boost the city centre, was already 20 metres out of the ground in March 2019, when a concrete pour went ahead - and a beam twisted.

The whole project then began to unravel.

At that stage, "two thirds of the structural steel had been erected and half of the concrete elements completed", the documents said.

"Whilst not expressly stated at the time, it became apparent that the issue related to the seismic resilience of the building."

That took months to come to light - initially, the council believed the defects were few and isolated.

The building's designer, veteran nationwide structural engineering company Harrison Grierson, did a review, told the council there was "an issue with the ramps", made some localised design changes, and the council issued another consent in July 2019.

Harrison Grierson's managing director Glen Cornelius claimed to RNZ that his firm blew the whistle on itself.

"It was Harrison Grierson who identified and advised the council that a remedial design was needed for the building," Cornelius said in a statement.

Johansson was nonplussed at that claim.

"I struggle to understand that statement," he said.

It was the builder, Watts and Hughes, that raised the alarm and responded well, he said, leading to what proved to be a vital decision by the council to call in outside assessors, at the same time as Harrison Grierson was amending its original design.

"We were starting to lose confidence," Johansson said.

"We had specialists on site and it became obvious there weren't seismic [proof] joints between the ramps and the floor slabs.

"There were real doubts about the design principles and the fundamentals."

As for Harrison Grierson, "it was only in August that it was recognised by them" just how big the problems were, he said. 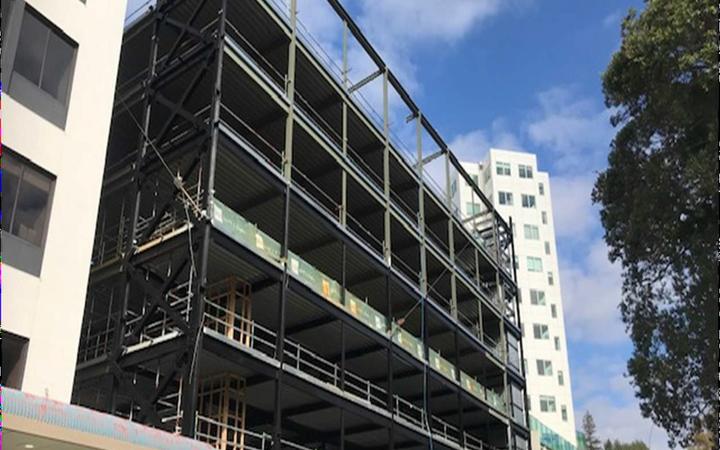 A full halt to construction was called in September 2019.

Costs to the council carried on, at $4000 per day - not accounting for the loss to Tauranga of extra carparking.

By then it was clear that parts of the site, like the stairwells, were not safe to work around, though seismic forces were not in play in the same threatening way as they would be were the building actually finished with its full loading on the walls, Johansson said.

The council said those two had since left Harrison Grierson.

It has lodged a third complaint against the engineer who approved the design in an independent peer review done at a small engineering company, Constructure.

Constructure founder Cory Bedford, of Christchuch, would not go on tape but told RNZ:

They were in discussions with the council, Bedford said, adding "I'm not comfortable on stating anything further to you", and referring RNZ to his lawyer.

Both Constructure, and Harrison Grierson said they had undertaken internal reviews of what went wrong but rejected the need for independent review.

"Our internal review was undertaken by senior Harrison Grierson personnel who were not involved directly with the Harington Street Transport Hub project to ensure their objectivity," Glen Cornelius said.

"The review considered where the issues were, how they came about and what Harrison Grierson can do to ensure this doesn't happen again."

The problems were confined to the carpark, and did "not reflect the depth of expertise and standard of service we set ourselves", Cornelius said.

Harrison Grierson employs several hundred people and has been in business 130 years.

'Hate for anyone else' to go through this

The council abandoned the project formally two months ago.

It was "tortuous" getting to that point, Johansson said.

In late 2019, the council thought coming up with a remedial design that would result in a good-enough building was do-able.

By early 2020, that had begun to slip away, the documents show.

Watts and Hughes, and major engineering firm, Aurecon, could not agree with Harrison Grierson on a strengthening plan.

By May, the seismic bracing system was still not figured out.

"As part of the column strengthening, steel plates are required which pass through the existing completed concrete slabs," one advisory report said.

The steelwork subcontractor didn't think the strengthened design, unfinished as it was, was even buildable.

"Removing and replacing a ramp that is tied to the basement floor requires considerable demolition and planning to complete safely," Watts and Hughes told the council.

"The waterproofing of fixings through the exterior precast walls poses risk and no guarantee has been given or obtained for these works based on the design."

The durability of the carpark was not even looked into, Aurecon said in June.

Its advice was that if it rebuilt or strengthened the block, then hiked carparking rates to try to recover costs, this would be a bad option, especially with Covid disrupting carparking demand, the documents show.

A rebuild would be so noisy - and dusty - it would probably break council noise control rules.

"I hope everyone that is involved in the sector sits up and takes notice," Nic Johansson said.

Construction monitoring at the carpark building did not pick up the design faults early on.

Also, the council did not spot them when it consented the flawed design.

But there was a limit to what checks could be done, Johansson said. Hiring a "checker to check the checker" was not how the system worked, and it would be better if the industry simply lifted its game.

"The council has every right to rely on the engineering expertise from those designers that have got the right qualifications and quality marks around it," he said.

"Councils simply don't hold the expertise of going into the degree of check" it would require to review engineering designs in-depth.

Public confidence in the council's building department was badly shaken by the debacle of the Bella Vista subdivision three years ago, where consenting failures doomed 21 homes. However, this was entirely different from Harington Street, Johansson said.

OIA documents released to RNZ showed the city council's building control team passed its latest accreditation test from the Ministry of Business, Innovation and Employment in September 2019, without any 'serious' fault being found.

However, twice as many 'moderate' faults - 26 - were found than at its previous assessment.

It was told to fix these by early 2020, MBIE records showed.

The building team had 11 unfilled technical jobs, about a quarter of its complement.

The bills from trying to rescue the afflicted carpark continue to mount; the documents show about $2m is set aside in case any construction is needed at it this year.

The council might consider compensating neighbouring apartment owners who've had to put up with it.

"It's incredibly time consuming and costly problem, and also frustrating to us as an organisation and our community, because now we have an eyesore sitting there much longer than it should be," Johansson said.

"It should have been a functional building being a great asset and amenity for the community."

Someone could still buy the site as-is, and negotiations and legal action could claw back costs, Johansson said.

RNZ asked if the council was checking other designs. It said another project, a small retaining wall designed by an engineer who worked on the carpark design, was being checked for compliance.

However, it is not reviewing the whole Harington Street debacle.

May 2020: Failure to come up with a strengthening design

August 2020: Advice to demolish being considered