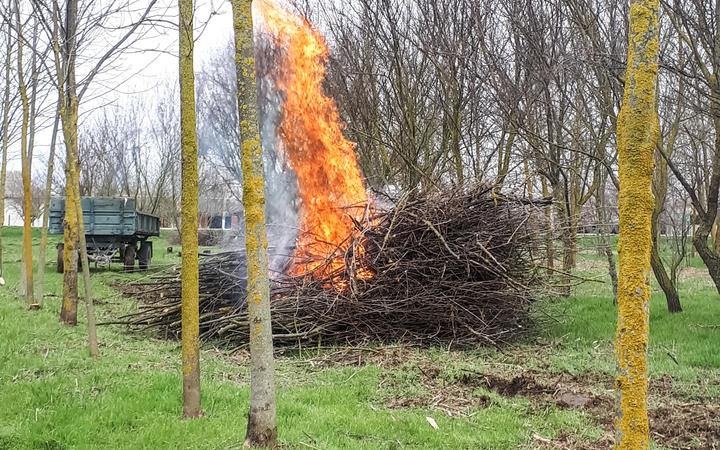 A report presented to the council's regional planning committee today said there has been a rise in smoke complaints on the Heretaunga Plains.

"This is largely due to the region's productive horticultural industry, and partly due to urban and lifestyle blocks burning vegetative material on their properties. Outdoor burning on horticultural properties typically comprise of multiple, large fires on one site," the report said.

Council staff reported that particles from the fires cause pollution people can see on a winter's day, and can be inhaled deep into the lungs, leaving people with poor health.

"When inhaled into people's lungs, [a pollutant PM10 can cause asthma attacks and respiratory diseases which, in turn, can lead to increased hospital admissions, use of medication, days off school, lost productive days and even premature deaths."

A rule in the regional resource management plan permits the burning of vegetation all year round in Hawke's Bay, except in the Hastings and Napier airsheds (roughly the city boundaries) where outdoor burning is not permitted during winter, unless the material is diseased or from an orchard development.

The intent is for these rules to have "no more than minor" effects on the environment.

But the report said "questions had been raised" about managing pollutant concentration, nuisance and unintended health consequences

Members debated whether any action should be taken.

The decision was made to hold off for three years, waiting for it to be addressed in the regional resource management plan review.

A majority of committee members voted for the decision - 12 voted for it, one against and three abstained.

Staff noted these options were costly and could impact resources.

Council chairman Rex Graham abstained from the vote and was angered by the decision.

"I'm very sad we're going to put this decision, it appears, off for two, maybe three years while we twiddle our thumbs. Because all the facts are infront of us right now," he said.

"We have to now wait three years before we can get it, because we're just going to ask a whole lot of silly questions that we already know the answer on."

He believed it was the "most significant health issue" the regional council would deal with, as a recent meeting outlined there had been 1200 premature deaths a year from air pollution.

"This is an order of magnitude above anything any of our water quality issues would be creating if properly managed or that we would even condone as acceptable. So we can't sit around and I sympathise with Rex's frustration about this, but I'd have to say on balance, the only viable option I can see and the only sensible option from a resource and an integration planning perspective is the option on the table.

"I would invite and strongly encourage industry to come to the table with a code of practise around this issue."

The committee's recommendation will be put forward to a council meeting at a later date.

The regional planning committee advises the regional council on natural resources. It is made up of all councillors and post settlement governance entity representatives (an organisation that receives and manages a treaty settlement on behalf of Iwi members after the settlement is ratified by the Iwi).