Wellington City Council, businesses and the police are working together to stem recent spates of violence in the city's entertainment district. 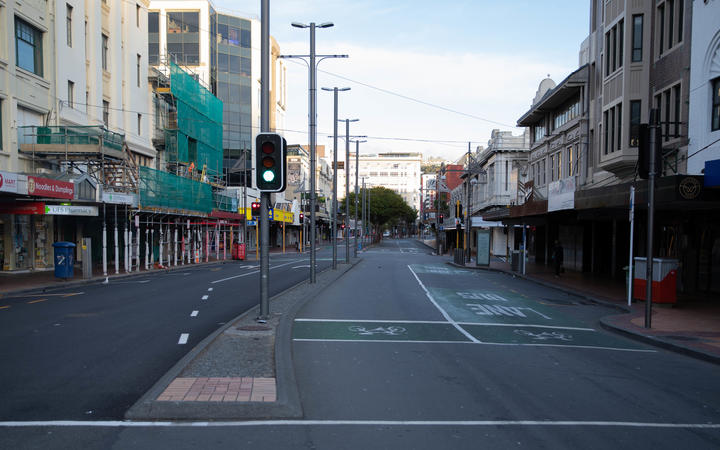 Courtenay Place has been the scene of mass brawls at night but here during the lockdown, it's a subdued scene. Photo: RNZ / Samuel Rillstone

Mass brawls, resulting in numerous arrests and some hospitalisations, have broken out on Courtenay Place in recent weeks.

A brawl last Saturday resulted in nine arrests and left one person with serious injuries from an apparent stab wound.

Police said in some cases, they were lucky not to be dealing with fatalities.

Some of it was put down to an increase in the number of people who were out on a Friday or Saturday night.

All involved parties, including the council, police and business owners, met on Thursday to discuss possible actions, with a night time forum being set up to offer more long-term solutions.

Hospitality NZ Wellington branch president Matt McLaughlin said: "The hospitality industry, Council and police are all on the same team and wanting the same outcome, a vibrant but safe night time economy where everyone feels safe and is safe".

"We understand the important part the industry can play in keeping the city safe, we see ourselves as part of the solution to the problems. I am looking forward to getting the night time economy forum back together again and working through the ideas that we have shared and heard today."

The forum was not a new idea - it had been running for some years, but momentum fell away 18 months ago.

Wellington Mayor Andy Foster said its restart was the most important thing from the meeting.

There were also some long term ideas which were being thought up.

"One of the things that's come through, particularly from the police, has been if you've got people who are a little worse for wear, if they're in too close proximity to each other, that tends to be when, the police are telling us, the fights start," Foster said.

"If we are able to expand the footpaths, then that may well be part of the solution."

The meeting was not just in response to the increased levels of violence being seen on the strip in recent weeks. The meeting had always been planned to discuss the future of the road, and how it might be used in coming years.

In particular, there was an emphasis on the need for a more strategic approach for the management of the night time economy.