Estuaries are stuck in a "complicated jigsaw" of overlapping management and ever-changing policies and it is impacting the environment, a report by the Parliamentary Commissioner for the Environment shows. 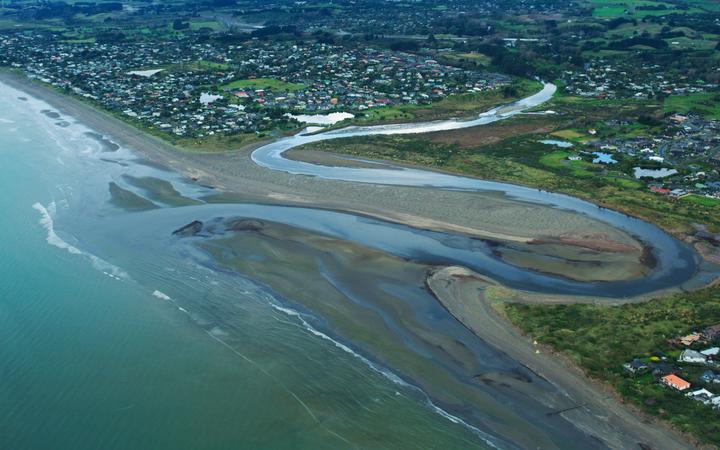 Commissioner Simon Upton said these critically important ecosystems should be treated as a single entity from the mountains to the sea.

The report, Managing Our Estuaries, is a based on case studies in five estuaries - the Whāingaroa Harbour in Raglan, Invercargill, Pelorus Sound in Havelock, the Tauranga Harbour, and the Porirua Harbour.

Upton said pollutants that came off the land ended up being stored in these estuaries, so there was a need to better manage them.

A solid management framework should be established to cut throughout the murkiness, and there should be a focus on making high-quality data available to inform decisions, he said. 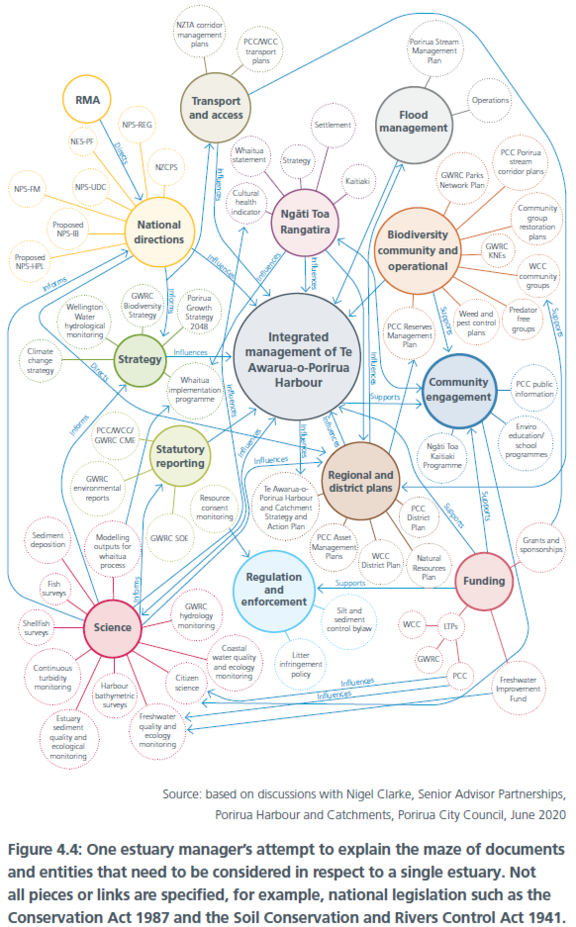 One estuary manager's attempt to explain the maze of documents and entities that need to be considered in respect to a single estuary. Photo: Supplied

One estuary manager's attempt to explain the current system for management left a tangled mess on a page, Upton said.

"It's not that anyone deliberately set out to create a tangle, but when you've got a National Coastal Policy Statement, a Freshwater Statement, a Biodiversity Statement, you've got territorial authorities, you've got iwi ... there's so many moving bits that have been allowed to grow over decades, that it is very complicated.

"When things are complicated a very interesting thing happens - people say 'gosh that's complicated' then they go back to managing the one thing they have got responsibility for. Nobody's got the overview, and that's why we've ended up in the tangle."

He wants to see them protected under the latest National Policy Statement for Freshwater Management, which sets the standard on managing freshwater.

"I don't think there's a simple solution. I do think extending what we do with freshwater to estuaries would make a big difference."

He added that high-quality data should be made available to inform any decision making, "because all of the best ideas in the world are meaningless if you don't know what's going on".

"The health and wellbeing of an estuary is rarely the sole and undivided responsibility of any one entity.

"This report tries to take the estuary's point of view in asking whether we are doing as good a job as possible at managing their health," Upton said.

"That means considering all the activities that cumulatively impact on estuaries - regardless of where they are located - and with climate change in mind."

"This is where I would have liked to see much more direction and discussion. How can we move beyond separate spatial and legislative frameworks to something akin to ecosystem-based management in the spirit of te ao Māori? How about legal personhood?"

She said the report made an important point that fragmented ownership was a legacy of Western society.

"The Māori notion of ki uta ki tai, from the mountains to the sea, represents a holistic worldview that focuses on the mauri, the life force of a place, as an indicator of ecological health.

"This [legal personhood approach] very much fits the notion of ki uta ki tai, and may well be an option for estuaries, but very little discussion in the report is devoted to integrated management processes."

Upton said that concept was "an interesting idea".

"We had another idea which was possibly having somebody who could be a champion for the estuaries.

"I think that if this report causes a debate on how we could do this better and get rid of this spaghetti diagram responsibility that we currently have, that would be a very good idea."

Other scientists have praised the report but said the recommendations should have gone further.

Auckland University marine professor Simon Thrush said the report identified many problems with the estuaries, "but it is light on solutions".

"This is a difficult task but I was hoping for a bit more of a revolution than business as usual. If you want to fix these systems we need to know how they work, and the report does not address the information we have that goes beyond a description of state to address how they function and how these functions are impacted by human activities."

Niwa chief scientist for freshwater and estuaries Dr Scott Larned said the scope of each recommendation should be expanded to prevent and reverse estuary degradation.

"Environmental monitoring is costly, but the need for monitoring data is inarguable, and we commend the PCE for making that clear. However, monitoring alone will not be adequate, as limit setting is based on cause-and-effect predictions, not raw data."