Some Northland residents affected by last week's flooding may have to wait six months until they can move back into their home. 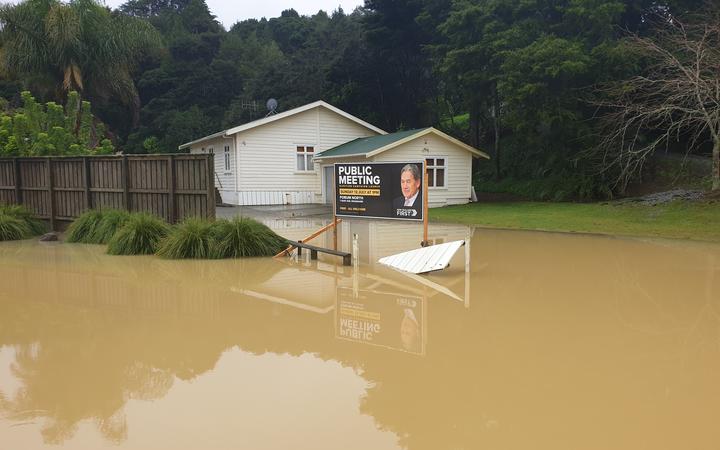 More than 150 land insurance claims have been made to the ECQ for flooding in Northland which cut many houses and roads off on Friday night. Photo: RNZ / Sarah Robson

This comes as the Earthquake Commission has received more than 150 claims relating to the flooding.

After months of near-crippling drought more than 200mm of rain fell across the region over 10 hours from last Friday night.

A number of roads were temporarily closed due to flooding and slips, but most have reopened. State Highway One through the Mangamuka Gorge remains closed due to eight significant slips and many smaller ones along a 12 kilometre stretch.

However Far North Deputy Mayor Ann Court has said roading crews are hard at work repairing the damage, but it could take years to fix everything.

Northland Civil Defence spokesman Murray Soljak said the region is in clean up mode, with home owners and contractors cleaning up properties affected by flood waters.

He said while some people are already back in their homes, others have a longer wait ahead.

"It depends on who you are. There's people who weren't affected, or only mildly affected ... at the other end there are properties with dangerous building notices attached to those."

"By and large, the people with insurance are working through that process," he said.

He understood that the wet timber frames in buildings took about six to eight weeks to dry out at this time of year.

"That is a considerable period of time ... after that point they [building inspectors and insurance companies] think they can get through them reasonably quickly. People will be out of their homes for that length of time."

He said displaced people were staying with family and friends, or staying in other accommodation.

In Moerewa, septic tanks were being emptied and skip bins were provided for people to get rid of flood-damaged goods.

Earthquake Commission chief readiness officer, Josh Lindsay, said 156 land claims for the Northland flooding had been received as of 10am today.

He encouraged homeowners to contact their insurer to lodge a claim if they hadn't already.

"By calling their insurer, they'll be able to have their claims resolved through one point of contact," he said.

"This means they can get their land cleared quickly and get on with any building repairs, enabling them to get back on their on their feet as soon as possible"