More rain this afternoon in Northland may exacerbate surface flooding and slips throughout the region after heavy rain this weekend. 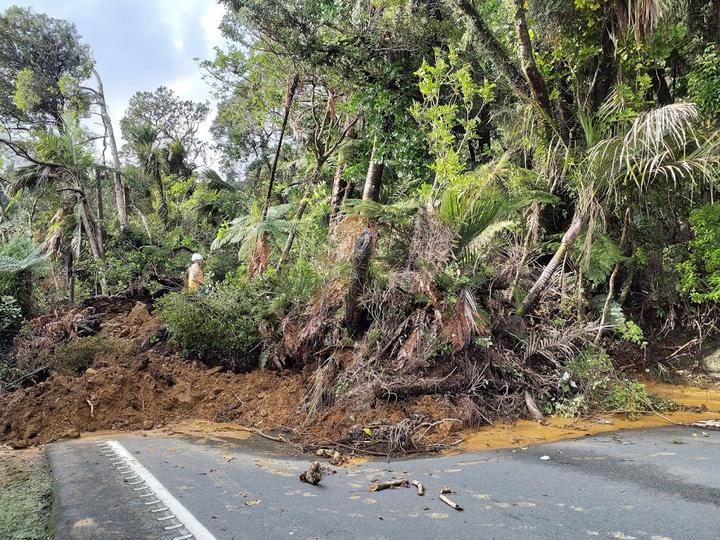 There are at least seven slips through the Mangamuka Gorge. Photo: Northland Civil Defence / Facebook

Floodwaters have largely receded after a one-in-500 year rain event.

The Transport Agency is asking motorists to drive with caution as potholes may have developed on sodden roads.

Its Northland manager, Jacqui Hori-Hoult said only one section of State Highway One between Kaitaia and Kaikohe at the Mangamuka Gorge was still closed.

"A lot of the closures have been due to the flooding," she said. "The teams have been working really hard and they've been able to clear a number of those small minor slips, so our challenge now is through the Mangamukas."

The Minister of Civil Defence said the full extent of the damage done to the Far North from this week's floods still wasn't clear.

Peeni Henare travelled to the area today to assess the damage and spoke in Moerewa in Northland.

"We want to acknowledge a significant event has happened up here," he said.

"We know that the true impact of that will not be realised immediately, but certainly over the next few days we stand ready to continue to support the efforts to recover up here in Tai Tokerau."

The region is in clean-up mode, after heavy rain flooded houses and businesses and damaged roads.

The rain has affected water systems, and the Whangārei and Far North councils have asked people to conserve water until damage can be fixed.

In Whangārei residents are being asked to halve their water use. Two of the city's three plants are partially working, and up to 80 percent of the water normally needed for the city is being produced.

However, the Whangārei District Council says unless there is a 50 percent water saving, the city runs the risk of running out.

The temporary water restrictions are expected to last for a week.

In the Gisborne region, rivers around Tolaga Bay were receding this afternoon.

Some had risen more than three metres in a few hours this morning.

Officials said no property was flooded.

Some 13 homes were evacuated, but those people were being allowed to return home tonight.

The heavy rain caused flooding and slips all over the East Coast.

Gisborne's Mayor said the rain has also washed debris from logging onto beaches in the region.