Roads are still treacherous in the Gisborne and East Coast regions after weekend flooding. 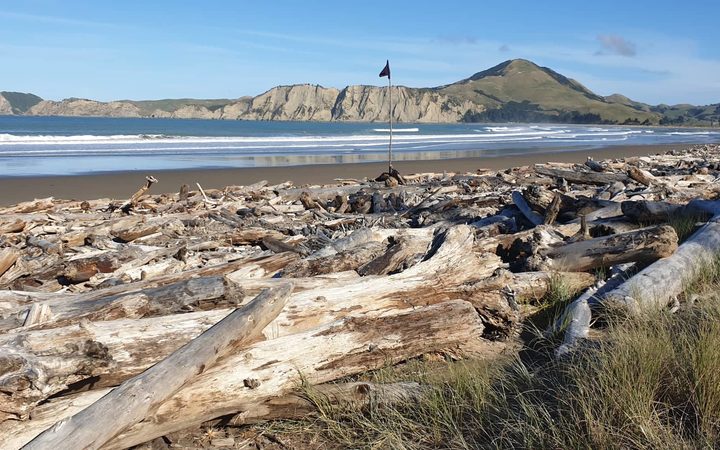 File photo of logs at Tolaga Bay in March 2019. Over the weekend, debris was swept down the Hikuwai River near Tolaga Bay. Photo: RNZ / Anusha Bradley

State Highway 35 Between Te Puia Springs and Tolaga Bay was still closed due to flooding. NZTA said motorists should delay travel if possible but if they needed to be on the road they should use SH2 at Gisborne and Opotiki.

Flooding had hit the region along with Northland which had more than 200mm of rain following months of drought, leaving farms under water and homes uninhabitable.

Gisborne District Council director of community lifelines David Wilson said a large number of slips were down across a big area, and trees were down.

"Surface flooding has gone away now, however there's still a lot of unexpected things as trees continue to come down or as we still have continued wet weather, we still have slips that are still moving so we do need the public to have extreme caution on the roads when they're driving," Wilson told Morning Report.

More rain is forecast for the region.

"We're concerned about any further rain on the district at the moment as it is very saturated and we do have a number of slips that look like they will mobilise further."

Over the weekend debris from logging operations washed down the Hikuwai River near Tolaga Bay.

The beach at Tolaga Bay beach was once again blanketed in tonnes of forestry off cuts.

Tolaga Bay emergency defence officer Greg Shelton said it was lucky the slash did not cause more damage.

From what he had seen, farmland escaped the dump of logs and debris, but he expected the beaches would not be cleaned up until November.

David Wilson said the forestry debris built up at bridges and crews were mobilised to clear them.

There would be an investigation to look at where the forestry slash had come from, he said.