Layla (not her real name) is a New Zealander working remotely from the Bay of Plenty as an online advocate for some of the estimated 400,000 migrant domestic workers in Lebanon. 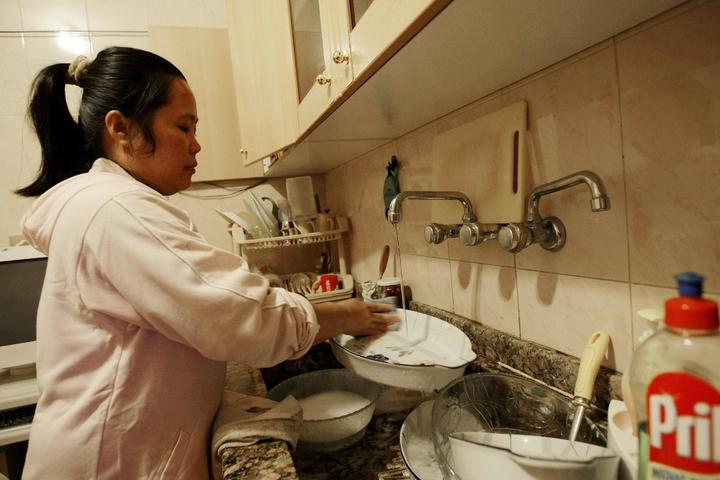 A house maid from Philippines washes the dishes at her employers' apartment in the Lebanese capital Beirut. Photo: AFP

They are mostly women who come from African and Asian countries to work in private households, and whose rights are largely ignored under Lebanese labour law.

She intervenes in the worst cases of maltreatment and abuse. These can leave workers unpaid, stranded without passports, and controlled and confined in conditions akin to slavery.

By threatening to name and shame the worst employers on social media, she and the activist group This Is Lebanon have made enemies.

"If you heard the threats that I have received, you would also call yourself Layla," she said, discussing the messages she had received from abusive employers in the country.

"They don't appreciate it, they say that they're coming for me and they'll find me and I'll never have another peaceful night's sleep again."

She said around 50 percent of the cases her group dealt with were self-referred - where women working as maids had contacted This Is Lebanon themselves - while the other 50 percent came from families of the women, who often wondered why their relative was not sending money home as expected

These women were usually recruited in their home countries, with around 80 percent of them coming from Ethiopia, she said. While they were promised a certain amount of pay and regulated working hours, many would find this was not the case once they arrived in Lebanon.

She said most of the women would have their passports confiscated on arrival and around 70 percent had no freedom of movement at all.

"My neighbour in Lebanon never left the house unless she was with her employer - that's normal," Layla said.

While 190,000 domestic workers were issued with work permits in 2019, Layla said that counting undocumented workers, the number would be much higher - This Is Lebanon estimates it at around 500,000.

When a domestic worker or their family got in touch with the group for help, Layla said they would make sure they had an accurate picture of her situation before contacting their employer.

Once they had that information, the group would contact the employer and ask questions about their worker's salary - and if they claimed they had been paying them, they would be asked to send pictures of Western Union receipts to prove it.

"We contact them and ask them to pay her and send her home and the story will disappear. But if you don't comply, you're going to see yourself all over Facebook."

As these women arrive in Lebanon through a system called "kafala" - which is the Arabic word for sponsorship - their legal status is tied to their employer.

This means the local police offer little help - and if a domestic worker escaped and went to the police, they would likely be returned to their abusers.

"Her only option in that case is to run away. But usually what happens when she runs away is the employer, to cover himself because he hasn't paid her, he'll go immediately to the police station and lodge a false accusation of theft against her.

"So then she is not only undocumented, she has no way home and when she's eventually caught by the police, she has to go to prison. The only way home is through the prison system once you run away."

The situation had only got worse under the coronavirus pandemic, she said, with reports of maids being dumped outside embassies in Beirut as some employers could no longer afford to pay them due to economic collapse.

Over the last three years, Layla had dealt with over 5000 cases of exploited domestic workers - and said the group's actions had largely been successful, with many of these women returning to their home countries.

"Most of the cases never make it onto Facebook and we always tell the employer, our goal is not to post - if we post, we've failed basically.

"Our goal is simply to get this girl her rights and that's the end of it."