Robert Fisk: reporting from the frontline

Fisk, who has spent the past 40 years living in war zones covering conflicts in the Middle East, the Balkans and Ireland, says journalists and editors cower from reporting honestly because of corporate and political influence.

He told Kim Hill the notion unbiased reporting musn’t take a moral position was a nonsense and that journalists should, at the very least, challenge narratives of power, which were usually distortions of truth.

The Englishman’s high-profile career is the focus of This Is Not A Movie, a new documentary by Canadian director Yung Chang. 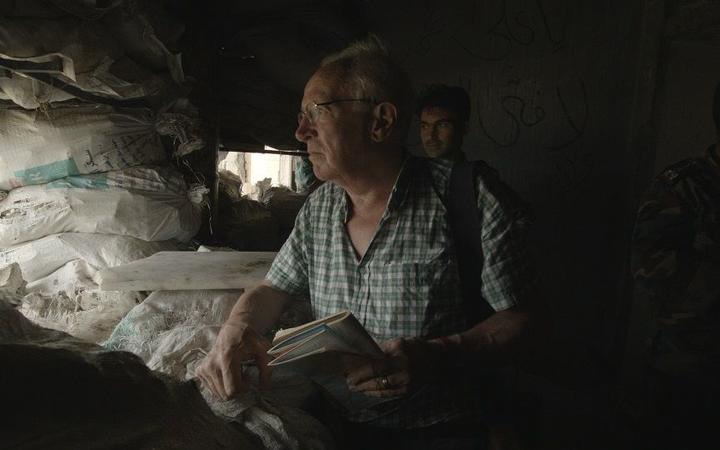 It is playing at the Doc Edge Festival, which will be online this year, running between Friday, 12 June and Sunday, 5 July.

Fisk has broken several big stories in his time, even landing an interview with Osama bin Laden, notorious Saudi founder of the pan-Islamic terror group al-Qaeda.

A story that didn’t make it on to the front page of The Times - his former employer - was one exposing US responsibility for shooting down a Iranian passenger aircraft in 1988, at the tail end of the Iraq-Iran war.

The story, which Fisk verified using local air traffic control sources, was spiked and instead the paper published claims by the US navy that the pilot had tried to carry out a suicide mission on a US warship in the Gulf. His story was eventually published by Ireland’s Sunday Tribune, with Fisk resigning and moving to rival newspaper The Independent.

“I thought, that’s the time I go. If I’m going to risk my life for a newspaper but my editor will not risk his reputation with his owner over a story of mine then it’s time I left,” he says.

Fisk says The Times editor toed owner Rupert Murdoch’s political line, telling him his story was rubbish. An official inquiry by US authorities subsequently backed the content of Fisk’s story.

“It’s a sort of self-censorship… the problem is once you have a ruthless owner and you know your livelihood is in the pocket of that man – and if you’re not fortunate enough to have the reputation that can possibly get you another job – there is a tendency to start not wanting to rock the boat… so it’s in the journalists’ blood, as it is the editors’, not to do something that will cause a ‘crisis’."

He says this power dynamic affects the way reporters frame stories and reflects the type of politically-contrived language used too. Not least in the Middle East, and especially when dealing with Israel’s occupation of Palestine.

“That’s why, for example, journalists refer to the Israeli wall separating the West Bank as a 'security fence', because they don’t want to offend the Israelis and Israel’s supporters by calling it a wall, even though it is higher and longer than the Berlin Wall.

“That’s why we call it a ‘Jewish settlement’ in the West Bank, when it’s a Jewish colony… which has a kind of soft impression of settlements in the Wild West perhaps, of course, you think of the Native Americans attacking them.

“And also you have this thing where you must never talk about a war between Israel and the Palestinians, it’s always a dispute… it’s more of course, it's one group of people stealing other people’s land. By de-semiticising this conflict, because we are frightened of what editors or owners will say… we effectively say ‘there must be something wrong when the Palestinians throw stones, they must be generically a violent people'. So, in a sense, we contribute towards warfare, by self-censorship.”

He rejects the concept of giving a false ‘balance’ to stories – that, in some fashion, balance is the ultimate measure of reporting. It is not enough that a journalist merely keeps an accurate score of events in a conflict situation, without taking into account history or power differentials.

The argument that a slave owner’s views on the slave trade must be used to strike balance in a story for it to be fair and accurate, he argues, is morally absurd. So too with a Nazi’s views in a story dealing with the extermination of Jews. Fisk cites a contemporary example - the Sabra and Shatila massacre in 1982. Scores of Palestinians and Lebanese Shiites were killed by a militia linked to a right-wing Lebanese party, allies of Israel. The names of at least 1390 were identified, with some death-toll estimates nearly tripling that number. Fisk was on the scene in Lebanon.

“I did not spend my time giving equal time to the killers,” he says. “I talked to the relatives of the dead and tried to find out the identities of the dead… My feeling is, you must be neutral and unbiased, but unbiased on the side of those who suffer.

"The idea that we are some kind of robotic creature that reports wars as if it’s a football match, where you give equal time to each side, is a bloody tragedy. It is not a football match.”

Fisk’s manner of reporting has landed him in hot water. In Belfast, he was accused of giving succour to the IRA because he exposed British security force brutality during the Anglo-Irish conflict, which ended in the 1990s. Most recently, he was attacked for undermining those attempting to overthrow Syria’s president Bashar al-Assad, after a story questioned proof Assad's forces had carried out a deadly chemical attack in April 2018.

The documentary This Is Not A Movie highlights a story Fisk wrote that found no trace of a chemical attack in Douma that had supposedly killed dozens of civilians, a story widely disseminated by western media.

He travelled to the Syrian town and talked exhaustively with local people to find proof of the attack, even inspecting underground tunnels of interest, again finding nothing to back the veracity of the claims.

Fisk talked to a doctor, who said respiratory distress by civilians had been caused by a dust storm created by nearby joint Syrian and Russian bombings.

“The final report of Organisation for the Prevention of Chemical Weapons did in fact censor out some of the evidence by its own scientists so that it would say that it’s an open-and-shut case that Assad did use gas. In fact, its own staff could not finally prove gas was used,” he says.

This didn’t stop verbal attacks suggesting he'd done Assad a favour. Fisk brushes this off as merely something to be expected if a journalist is doing their job properly.

“If we don’t do that we’re handing over the writing of history to political parties,” he says.

“We simply have to bash on and do our best to get at the truth, even though in Douma I couldn’t establish what it was, at least  we raise the doubt.”

Getting to grips with history is essential if serious reporters want to do their jobs properly, illuminating meaning behind what would otherwise seem random or vindictive acts of violence.

“I do very much think you cannot report a war or go to a war without at least a very good history book in your back pocket... without knowing what lies underneath the embers you don’t know why the fire is burning.”

An understanding of World War I and the 1919 Treaty of Versailles, which ended the war between Germany and allied forces, can account of much of the antecedents of conflict in the Middle East, he says. The treaty, in part, amounted to a carve-up of imperial rights to occupy nations and created divisive, artificial lines of territory across the region.

“I think there’s an automatic connection between the collapse of industrial civilisation and WWI and then a peace treaty that was effectively going to collapse the ruins of the Ottaman Empire in 1919 and from that came all these borders… particularly the borders of Iraq and Lebanon and Syria and Turkey and all my working life in the Middle East and indeed also in Yugoslavia and Belfast I’ve watched over the past 50 years all the people within those borders burn.

“I said to my friend in Beruit yesterday I think the reason we’re not finding evidence of Covid-19 among the Middle Eastern people is that, for them, it was Covid 1919 – Versaille was their infection and that continues now to spread its disease across the Middle East, of injustice, lack of independence and lack of freedom."

Good journalism was needed as much now as at any time in history. He says the hope that the world was getting better with the defeat of Fascism and the establishment of post-war institutions like the United Nations and human rights organisations had proven false. The historical causes of conflict hadn't be resolved.

“When you go into the alleyways of the world, the Palestinian camps in Beirut for example, and you actually talk to the people there you realise that they are living in squalor and dirt because Arthur Balfour, the British foreign secretary, signed the Balfour Agreement in 1917, and because the victorious allies, principally the French and the British divided up the Middle East. Britain would have Palestine and France would get Syria and Lebanon in the aftermath of that war and for those people, waking up in their hovels everyday, Balfour signed the declaration last night.

"For them Versaille happened yesterday and history in their experience is something that they are living tragically with every day.

“Whereas we people can luxuriate in a post-war world with values of civilisation, or we think we do, and technology to look after us.”

Journalism should question our cozy, false impression of ourselves as enlightened and civilised Westerners, who conveniently see others embroiled in conflict as lacking these values. He also points out a western hypocrisy of rightly attacking anyone who denies the German holocaust against the Jewish people, yet those in the West allow Turkey to deny its own Armenian holocaust in 1915, when 1.5 million Christians were killed.

Our complicity in imperialist wars and attitudes should be challenged by reporting facts within an authentic historical context, shorn of political spin.

“One of the things I think journalists have to do, as well as recognise the goodness of ordinary people, is to try and find out why ordinary people do wicked things.

“We wait to see if the Americans will give us an explanation and then we hope that their claim that they didn’t hit the hospital is true. Same applies to wedding parties and medical centres in Afghanistan and so on.

“When you consider that half a million Iraqis might have died as a result of the Anglo-American illegal invasion of Iraq in 2003, when people used to say to me ‘why don’t you want Tony Blair and George Bush put on trial’ I would always say ‘because they are not going to be put on trial’ there’s no point in wasting your energies’. Now I’m not so sure that would be my reply.”

With the current pandemic the focus of the world’s attention, the situation in places like Yemen has fallen from sight. But, he says, the intractable problems of the region are continuing without any respite.

“One of the great tragedies of the coronavirus pandemic is that the whole Middle East tragedy, of injustice, dispossession and blood, has basically faded away from all of us who are concentrating on our own families, our own countries, and we’ve largely forgotten that long after Covid-19 is in the history books, the same terrible history will continue in these regions.”

The film is playing at the Doc Edge Festival, which will be online only this year and runs between Friday 12 June and Sunday 5 July.