Floodwaters are receding in Northland after 24 hours of heavy rain but there's been widespread damage across the region and the Far North is effectively cut off by state highway closures.

About 30 people evacuated their homes in Northland last night as heavy rain lashed the region and more than 220 millimetres of rain fell in the district in 10 hours. 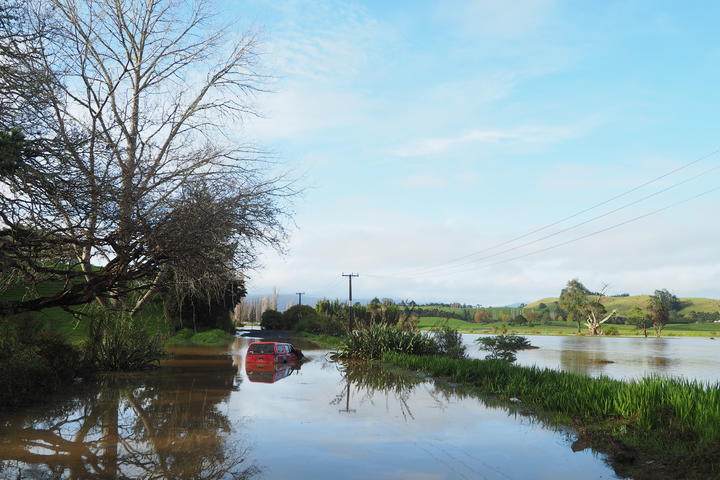 A truck that got stuck in floodwaters last night in Pamapuria near Kaitaia was still there this morning. Photo: Supplied / Izzy Holder

The evacuated residents stayed in temporary in civil defence centres in Onerahi and Kamo in Whangārei, and in Kawakawa and Moerewa.

If you witnessed the flooding, and would like to share pictures with us, please email them to:iwitness@radionz.co.nz

Whangārei firefighters were busy overnight, responding to more than 220 emergency calls and a spokesperson said some houses in the city needed to be pumped out.

Fire and Emergency also helped to clear roads blocked by floodwaters and rescued a number of people from flooded cars.

The Far North is effectively cut off by flooding and slips.

A Northland politician said a neighbour came to his rescue last night when floodwaters of more than a metre blocked access to his property.

Northland MP Matt King, a beef farmer who lives near Kerikeri, said he had to abandon his four wheel drive last night as it is not meant to drive through water that was more than a metre deep.

He said it was lucky his neighbour had a truck with a snorkel on it, which meant he could get home for the night.

King said he was meant to put up election billboards today but instead will spend the day surveying the damage in his rural electorate.

This was the view from the end of my road last so like many other Northlanders we were stranded. pic.twitter.com/xsITIQ2iXV

A rescue helicopter is on the way to the Far North, to help a pregnant woman trapped by floods and slips on the roads.

College of Midwives president Nicole Pihema said the woman is 26 weeks pregnant and in pre-term labour, but cannot get to a hospital because of the storm damage.

She said a midwife made it into the town before the roads deteriorated and is doing everything possible to help.

Pihema said it is a scary time for the mother, but the midwife is well-trained to handle such an emergency. 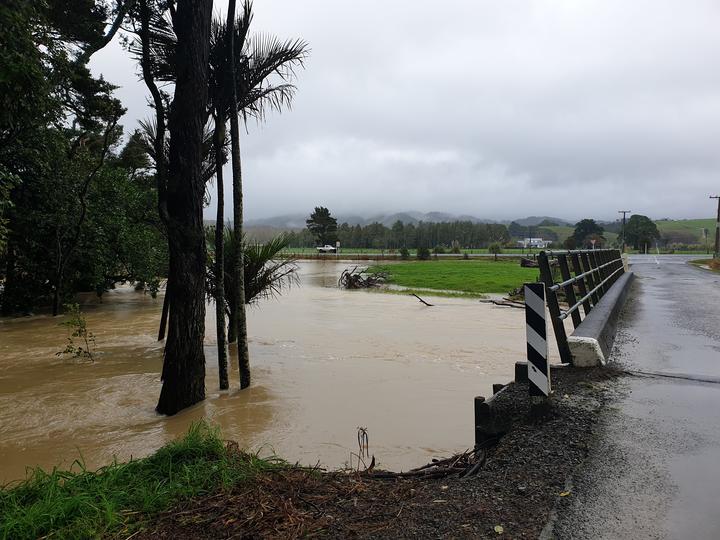 The mayor of Whangārei said the rain needs to stop so the city can begin its painstaking clean-up with the MetService saying 220 millimetres of rain fell overnight in the district - a one in 500 year event.

Mayor Sheryl Mai said the extent of the damage will become clearer this morning, and residents will be hurting.

"We need some relief now thank you very much, so we can begin to get through, assess damage and start making repairs."

"This is just diabolical for our people. We've gone from a drought to dealing with a 1 in 500 year event. Unbelievable," she said.

"Hopefully bad things come in threes - a drought, Covid, and a severe flood. That'll do, thank you very much."

A video sent to RNZ showed flooding north of Parakao heading towards Kaikohe:

Northland Civil Defence spokesperson Murray Soljak said the value of the damage to businesses will depend on how much of their stock was at ground level.

"Certainly there was one restaurant that probably didn't have too much in the way of floodwaters, but retail stores had a bit more stock that would have been reached."

He said Civil Defence did not expect the centres would be needed again this evening as the rain is expected to ease later.

"They will largely have served their purpose overnight and people will be able to get on with their lives and start looking at a return to home or somewhere they can stay today." 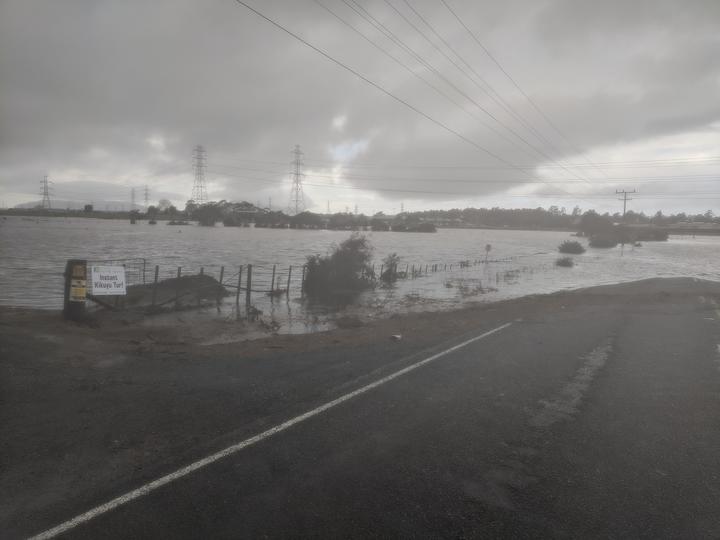 The general manager of the Discovery Settlers Hotel in Whangārei, Chris Jones, said the hotel went from a quiet night to having no vacancies as people became trapped by flooded roads.

Jones said he also got caught out.

"I came down to help the staff at about 7.30pm and then I couldn't get home so I spent the night here, we also had a coach of Dome Valley protesters heading back to Kaitaia and getting stuck, they couldn't get north of Whangarei, so had to do a bit of emergency accommodation for them."

Jones said it is going to be a busy day, with no indication yet of when flooded roads will be reopened. 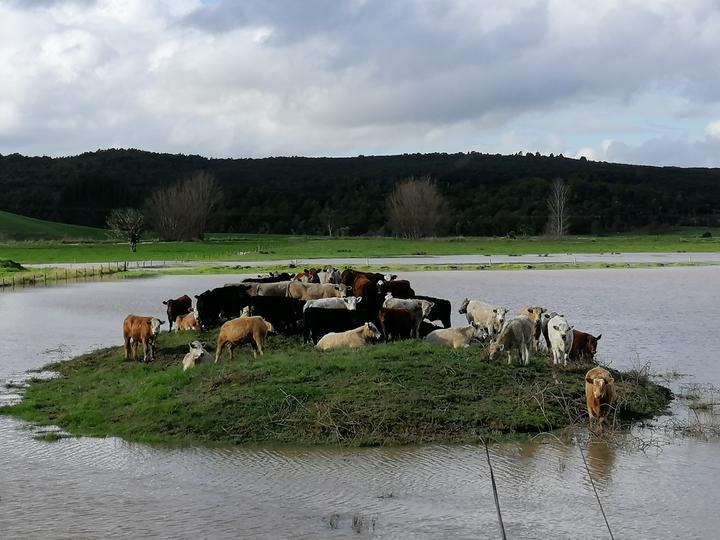 MetService meteorologist Alwyn Bakker said 220 millimetres of rain fell in Whangārei from 7pm last night until around 7am this morning.

"So to put that in perspective, that kind of event - getting 220mm of rain overnight - it has a return period of more than 500 years. So we're expecting that once in 500 years."

The MetService has now cancelled severe weather warnings and watches for Northland and Gisborne, but said that thunderstorms may still affect the region today.

People are advised to keep up with weather watches and warnings via MetService.

Some incredible rain totals from across Northland last night, with several gauges exceeding 250mm of rain in 24hrs, including over 150mm in just 4 hours at Whangarei Aero, and 56.8mm at Kaikohe in just 1 hour. Track the rain here: https://t.co/F9fZPWgf0f ^RK pic.twitter.com/NDUmL3MUXv

Whangārei residents told to only use water for emergencies

Whangārei residents are being told to use water only for emergencies after a major water main burst in the flooded district.

The main supplies water to residents in Onerahi and Whangārei Heads.

The Whangārei District Council issued an urgent notice this morning, saying residents should put just a small amount of water aside for drinking only.

The council said everyone in the city should immediately conserve water as treatment plants are struggling to cope with the intense rainfall.

There is a small amount in the reservoir but it is dropping fast, the notice said.

The Far North District Council also wants residents to conserve water saying the Paihia water treatment plant is not operating because debris from the flooded Waitangi River has blocked the water intake and one of the pumps at the plant is under water. 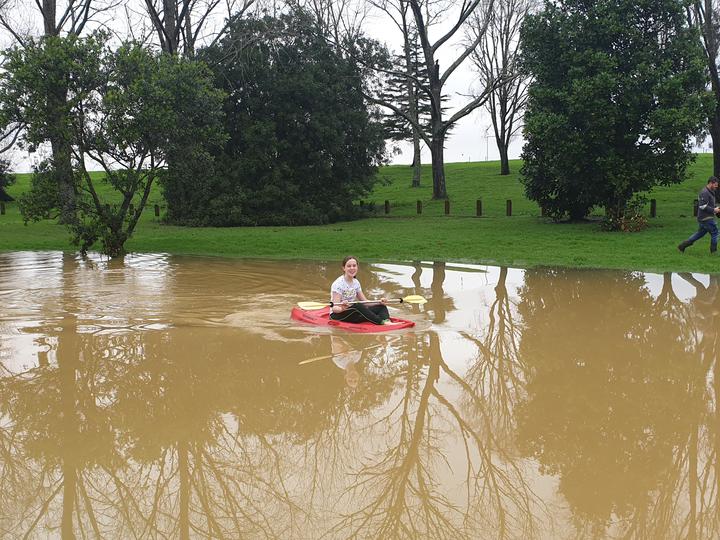 The Transport Agency said State Highway 1 remains closed between Kawakawa and Kaitaia (including the Mangamuka Gorge) due to multiple slips and flooding, part of SH1 at Whangārei, between Selwyn Avenue and Manse Street is closed due to a slip and SH10/SH11 is closed between Pukatona and Kawakawa.

There is a slip blocking at Dundas Road and a slip is blocking both lanes of Beach Road towards Pah Road, Onerahi, which the council said crews would clear today.

The Whangārei District Council this morning said there are reports of widespread flooding and residents should avoid travelling.

The council said at 10pm last night the following roads were closed due to flooding:

Riverside Drive reopened at 7am today.

Travellers north of Whangārei in the area near the Bay of Islands have been left stranded because of road closures and slips in both directions.

Kawakawa Primary School and Moerewa Fellowship Church are both helping to accommodate motorists.

Heavy rain near Tologa Bay and rising river levels are keeping locals on edge and residents close to the town are being forced to evacuate.

Tologa Bay Motel is about 100 metres from the Uawa River and a staff member, Eru Kaiwai, said the rain was especially heavy last night and the river is high.

"The rivers are bank to bank with a lot of rubbish coming down, bits and pieces of timber and logs and all sorts, and it's all flowing out into the bay."

At least three homes north of the township have evacuated and five more are cut off.

A base has been set up at Tolaga Bay Area School and residents are being warned of the dangerous weather conditions.

The Transport Agency says State Highway 35 is closed between Tolaga Bay and Ruatoria because of multiple slips and flooding.

The Hikuwai River was at 12 metres at about 9am today and rising, making it nearly equivalent to the recorded flood level in June 2018.

"We've got rain from now until Sunday, it's going to ease, however the river levels are still high, the ground is very saturated, so we're going to be keeping a very close eye on what is going on. The big thing for us is people to stay at home where they can, we don't want people to go out sightseeing."

Over the last 24 hours, Te Puia has had the biggest fall with 283mm of rain. Around the city 50-80mm fell, with 81mm recorded at Goodwin Road. Persistent 80-100mm is forecast to fall north of Tolaga Bay over the next 24 hours.

"This is an unusual weather pattern for this time of year," Wilson said. "It has come from the north east and brought with it long persistent rainfall saturating the region."